The Western, that forlorn, mystical genre that formed the girders of the American cinematic imagination, has been a boomin’ over the past decade. After a long quarter century no man’s land for the genre, something got in the air in the mid-’00s and the genre was popular again. We had the grisly tone poem The Proposition that found the historical and ideological connection between American and Australian history. We had the trio of stupendous 2007 efforts, No Country for Old Men, There Will Be Blood, and The Assassination of Jesse James by the Coward Robert Ford, which interpreted the Western through the lens of the 1980s, the early 1900s, and the classic period, respectively. We had Tommy Lee Jones provide two deeply classical studies in anti-classicism in The Three Burials of Melquiades Estrada and The Homesman, both infatuated with and critical of the violent “proper” masculinity of American society. The Western has become, as it always was in film, a prismatic, malleable creature prone to variations and styles and impulses that fitted it to the needs of the nation and the passions of the cast and film crew. END_OF_DOCUMENT_TOKEN_TO_BE_REPLACED

In his moonlighting career as a director of steely, even mulish focus, the perpetually weathered, stern Tommy Lee Jones has taken the Clint Eastwood route of imbibing in the great American traditions, although he does not share Eastwood’s masculine commitment to the Sam Fuller get-in-and-get-out storytelling method. Jones imbibes so much, in fact, that he catches his nation’s favorite tradition, the Western, when the genre is looking the other way with its pants down. In his previous directorial work The Three Burials of Melquiades Estrada, he pursued the sociospatial region of the modern American small-town – a space forever clinging to its past and stubbornly, cantankerously refusing to examine itself – as an avenue for comment on the history of the American imagination. END_OF_DOCUMENT_TOKEN_TO_BE_REPLACED

It is easy to view Pat Garrett and Billy the Kid, Sam Peckinpah’s first Western post-The Wild Bunch, and examine it as a follow-up to that seminally shrieking exercise in wolf-like nihilism. It would be easy to do so, and probably correct, but also incomplete. Pat Garrett, which follows ex-outlaw turned lawman Pat Garrett (James Coburn) as he vengefully hunts down his ex-partner Billy the Kid (Kris Kristofferson), bears an outline that is almost identical to The Wild Bunch. In both films, an ex-outsider who becomes a man of respectable society is strangled by his dogmatic commitment to hiding the memories of his lawless days by killing the last reminder he has of those days. In both films, the violence of wild society gives way to the violence of so-called “civilized” society, and in both cases, the social outlaws must die so that the corporate, conglomerate violence of civil people can live. END_OF_DOCUMENT_TOKEN_TO_BE_REPLACED

Ain’t Them Bodies Saints is little more than a New Hollywood pastiche, a loving and careful waxworks recreation of a style and type of cinema that was at one time, a great many years and Hollywood eras ago, the most lively and startling thing to ever happen to American cinema. As a film, David Lowery’s recreation of that style has not one new idea to bring to the table the New Hollywood built out of rustic, unpolished wood and then abandoned long ago. All Lowery is doing is digging through scrap heap, separating out the noble rust from the ignoble variety, and refashioning it into a garage sculpture where the very nature of the metal – falling apart, worn to the point of triteness – is a badge of honor, a reminder of how old this sort of tale really is, and how lively it can still feel when it is carted out after it hasn’t seen the light of day in too long. It doesn’t offer a new idea, but it offers a more humble reminder: in the New Hollywood of the 1970s, we now see not only a scorching fresh breath into the room of Hollywood’s musty old classicism, but a peculiar, well-worn form of old-timey comfort. Those New Hollywood films are now part of the classic American cinematic tradition, and Lowery is merely playing a requiem for them. END_OF_DOCUMENT_TOKEN_TO_BE_REPLACED

Amidst the sinew and cartilage of cinema during 1999, so many new cinematic talents emerged from the fray that it can be easy to overlook some of the talents who, charitably speaking, took a while to truly do any emerging. One such force, David O. Russell, spent the better part of the next decade generally hiding from the cameras and doing his damnedest to sour his indie-goodwill, keeling over his once-bright reputation until he was known more as a blistering brute, an angry young discontent of a director behind-the-camera, than as a genuine talent whose skills were readily viewable on-screen. He became an untouchable, in other words, scaring off actors as far as the eye can see and sending them scouring for the new next young upstart director. END_OF_DOCUMENT_TOKEN_TO_BE_REPLACED 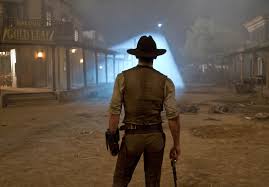 Cowboys & Aliens
There is a version of Cowboys & Aliens that exists in the mind of Steven Spielberg (who serves as producer here) that bears his visual wit, his economic ingenuity, and his zippy romanticism for the long-lost regions of the childhood imagination. A childhood imagination that positively flies as high in the sky as a rocket ship when it hears the wonderfully matter-of-fact title “Cowboys & Aliens”, a shouldn’t-be dream-come-true exploitation film out of the ’80s that happened to manifest as a big-budget Frankenstein’s monster of disparate parts in the modern era. This hypothetical version has weight and buoyancy, snark and ballast, and a yippy camaraderie and film-fried joy to please and have fun with itself for, say, 100 minutes, so as to not over-stay its welcome. This hypothetical version is scrappy and spoiling for a fight but never dour and never gloomy, and certainly, its children-playing-in-the-sand sense of draped-on imagination knows no limits. END_OF_DOCUMENT_TOKEN_TO_BE_REPLACED

When we last left him, former police office Max Rockatansky (Mel Gibson) lost his family and his best friend, and had fulfilled a most unfulfilling form of revenge on the now lawless highways of the Australian outback. He had lost and repaid the loss only to realize that there was nothing to be won back. When we last left him, there was nothing left for him but the empty road.

When we last left him, former no-name George Miller had given us one of the most menacing, sinister, full-throttle action pics ever released. Now a go-to guy, there wasn’t much keeping him from his distinctly more apocalyptic vision of dystopia and humanity left for dead, not to mention his vision of non-stop action filmmaking. With a greater budget and his original star Mel Gibson, then almost on the verge of becoming a major movie star and certainly a household name in the Australian film industry, in tow, his dreams would come true with the release of the 1981 The Road Warrior, one of the de facto “perfect” action pictures and still to this day among the true classics of the genre (a number that wallows and exists as a handful more than a genuine plethora). END_OF_DOCUMENT_TOKEN_TO_BE_REPLACED

There’s an earthen quality to way Sergio Leone understands location that is almost otherworldly. The mood, the atmosphere, the sense of a place; they all seep up from the cracks, and he strangles you with it. Everything about the characters and the conflict is just laid out plainly and honestly on the screen in a sort of pure cinema we really didn’t see in genre works in the mid ’60s (horror excepted, and also, notably, the other great genre of the Italians in the ’60s). The sand doesn’t just exist; it hoarsely croaks, it robustly swallows, it does a stalwart, omnipresent, Herculean take-over of the entire event of the narrative and coats everything in a throaty sort of impact that cinema rarely attempts. We aren’t just watching sand. We’re rasping our voices. We’re searching for water. We’re drying out as we sit, welcoming each bead of sweat like an old friend to be ravenously devoured.
END_OF_DOCUMENT_TOKEN_TO_BE_REPLACED

Another relatively short new feature to round out the month, this one about so-called “entertainment” films for the masses in the 1960s. Even when they weren’t doing much of anything else, films from this decade, the golden-age of gee-shucks entertainment, sure knew how to pop!

I like to think title puns are beneath me, but with a name like The Magnificent Seven, what can I say? The fact is, John Sturges’ film is a quintessential Sturges film, which is to say, although it is not a magnificent artistic statement, it is magnificently entertaining, and beneath its rough-hewn, leathery, functional exterior it hides a secretive, slick-as-can-be cool that hurtles the film forward toward and into conflict like a steadily mounting hurricane. Sturges isn’t a filmmaker of tricks and theme, but of steely, note-perfect technique, a man who didn’t have the eye of a great stylist but very much benefited from the hand of a great storyteller. And, although it doesn’t have anything under its sleeve, the tailor on the sleeves is so fine and perfectly measured in The Magnificent Seven that it is almost impossible to mind. END_OF_DOCUMENT_TOKEN_TO_BE_REPLACED

When Ana Lily Amirpour recently released her lushly sensualist horror film A Girl Walks Home Alone at Night, her cinematic passion was matched in its cathartic potency only by its free-wheeling desire to devour all influences. Obviously, Jim Jarmusch was the cipher through which her film’s identity was largely cracked, but in her sun-deprived cinematic wasteland, another female filmmaker was a key stepping stone: Kathryn Bigelow, a women who has since made a pit-stop in can’t-be-this-good action cinema before taking a well-deserved break to produce two of the finest naturalist war thrillers ever made. She went on to make more composed films, in other words, and probably better ones too, but her underdog outlaw passion in the world of film never burned as brightly as it did in her first big break: the 1987 film Near Dark, nothing less than a full-on vampire-western-romance-horror (a mouthful, but it should sound familiar to fans of Amirpour’s debut). It takes a lot for a film to invent a genre. That it comes within an inch of perfecting it on its first try is not only testament to Bigelow’s fully-formed craft, but of her restless, travelling spirit. END_OF_DOCUMENT_TOKEN_TO_BE_REPLACED