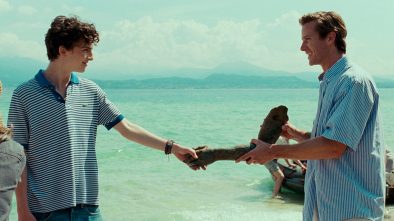 Befitting a film so infatuated with the experiential possibilities of considering textures and aesthetics anew with every shot, Luca Guadagnino’s surprise Oscar contender Call Me By Your Name resonates deeply with another classic about Westerners aimlessly adrift in Italy: Roberto Rossellini’s Voyage to Italy. In that film, the two principals, Ingrid Bergman and George Sanders, cast themselves errantly through the emotional and moral quagmire of personal disconnection as they wander through a mid-century Italy they feel totally dispossessed of.

At the same time, however, Rossellini resurrects specters of the past, and of art, to eulogize, critique, lament, and play non-verbal Greek Chorus to the central relationship. Each shot of a long-dormant statue or newly-uncovered ruin of Pompeii refracts the central relationship among two living people by uncovering untold reservoirs of cosmic implication. The film suggests not only that this story reverberates through the ages but that the film’s focus on the two characters is both revealing and limiting. In other words, that any film about only two upper-class European people is both reflective of and unobservant to other whispers and murmurs of untold desire, craft, passion, and observation that have passed through channels of history for centuries but can’t be demarcated by upper-class or European issues. That deeply humanist film suggests we must both become open to these channels – moving beyond our own problems – and, contrapuntally, humbled by them, necessarily aware that we approach the outside world with much hubris and without a full grasp of its weight and import. END_OF_DOCUMENT_TOKEN_TO_BE_REPLACED

First things first. As with a coalition of other 2017 awards contenders (Lady Bird, Call Me By Your Name, etc) I’m slightly bamboozled as to why The Florida Project specifically – as opposed to other equally great films that are, to my mind, similar in level of difficulty and comparable likeliness to receive Oscar attention – is being attended to by Oscar. In this case, the appreciation for writer-director Sean Baker’s The Florida Project is hard to square not only with the relative sidelining of Baker’s previous films – appreciated on the festival circuit, among critics, but never able to peak into the mainstream – but with David Gordon Green’s equally shambolic, equally hushed, and no less Southern films from the early ‘00s. Great films in The Florida Project’s milieu exist. It’s just that The Florida Project happens to be an especially stellar version of this milieu, mobilized to particularly evocative and fascinatingly self-contradictory conclusions or lack-therof. So, yeah, it goes without saying that it shouldn’t have to singularly bear the burden of Oscar glory and the attendant backlash it has received. But with a film this empathetic to all of its characters, what good is a review that doesn’t grant the film the courage of its empathy simply because people have finally decided to notice that the film is truly rapturous in its own majestic anti-majesty? END_OF_DOCUMENT_TOKEN_TO_BE_REPLACED

Neither the safety of the hearth nor the anxiety-ridden but possibility-laden frontier of the homestead, The Lost City of Z is an encounter between firm Old Hollywood cinema classicism and the porous potentiality of forward-thinking modernism. Basically, it’s the best kind of semi-mainstream 2010’s cinema, loosened enough from stultifying Oscarbait propriety by its independence from mainstream “prestige” cinema but never fully disarticulated from convention to the point where it barely reads as a narrative drama. Director James Gray’s film is irreparably sturdy but not chaste and never stodgy or conservative in aims, style, or ambition, creating a film that goes down smooth but burns in the throat and can be felt in the stomach.  It’s not out of Gray’s wheelhouse; he’s been stripping various epochs of classic Hollywood cinema for parts for almost twenty years now. But he’s among the only directors to nail the ever-elusive sweet spot between, say, the aesthetically and socially empty, non-directed husks of Edward Zwick – indebted to the worst of classical Hollywood Oscarbait – and the too-pristine, over-directed formalism of David Fincher where mechanical rigor trumps everything and anything, including meaningful interaction with theme. Lost City of Z is a conventional film, but it breathes new life into playing the classics. END_OF_DOCUMENT_TOKEN_TO_BE_REPLACED

The anticipated directorial debut of writer Taylor Sheridan  –  fresh off of the ice-cold hot-iron Sicario and the wonderfully arid, sand-blasted Hell or High Water – is simultaneously inspired and perfunctory, trenchant and essentially irrelevant. I would never call its engagement with issues of misogyny and Native American issues fraudulent or unearned – the film’s heart and mind are headed in the right direction – but for a film about race, its treatment is disappointingly cosmetic. The surfaces shimmer with sturdy, appreciably classical filmmaking smarts, but they never disturb or inspire. Much as I appreciate the film’s commitment to navigating the tangled web of US governmental jurisdiction – and concocting a thriller out of no less a subject than jurisdictional boundary disputes – Wind River settles for even-keeled watchability rather than truly chilling to the bone, or stoking a self-propagating frenzy like Sheridan’s other films. END_OF_DOCUMENT_TOKEN_TO_BE_REPLACED

For most of its run-time, Stronger is admirably the inspiration of director David Gordon Green, rather than merely the corporate product of a Jake Gyllenhaal-fronted Oscar hopeful. Which means it’s a necessarily and admirably stunted venture, one which doesn’t simply spell out or depict a narrative but one which scrapes through one, knocking into the walls of the various paths it explores, and knicking into on loose nails and shards of glass strewn through human life but generally scrubbed-clean in Hollywood narratives. Because this is Green, it also means Stronger is a story about arbitrary hang-ups, human ambivalences, wasting away in space, and foiled and failed plans rather than, say, bettering the self, achieving goals, or any kind of aspirational narratives. It’s not about getting stronger through surpassing limits, but about living with them. END_OF_DOCUMENT_TOKEN_TO_BE_REPLACED 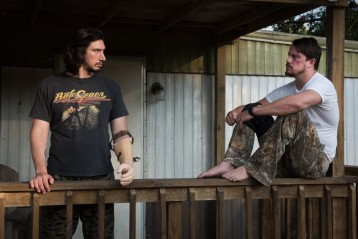 Crookedly satisfying and more homegrown than director Steven Soderbergh’s Ocean’s trilogy, Logan Lucky is much more than the much-vaunted director’s return to cinema from a thankfully-brief self-imposed exile. It’s also a return to the subject matter of his greatest popular successes – the ‘00s-defining trilogy of glitzy star-studded celebrity-commentaries mentioned above – but, crucially, not entirely a return to the idiom, mood, or tempo of those films. Logan Lucky, a scratchy and Southern version of those self-conscious tall tales with moonshine and whiskey replacing scotch and Vespers, is admittedly adjacent to those films, and its populist goals are harmonious to them. But Logan Lucky is also a film for our times: a post-recession hoe-down that is sun-baked, scrubbed-out, and let-down by the world in equal measure, a work of high spirits but weary eyes with glances both toward day-dreaming in the clouds and staring at the pavement. Either way, it’s hard for it to look straight ahead. END_OF_DOCUMENT_TOKEN_TO_BE_REPLACED

There’s a long-running parallel that suggests that the perennial questions of family legacy and destiny which populate the Star Wars films also animate the attitudes the various Star Wars filmmakers have toward their own fandom, not to mention their corporate masters, their own franchise-family legacy. On one hand, the films themselves rely on decrees about fulfilling parental lineage and, alternately, self-sovereignty, the possibility of personal choice, each film balanced precipitously in between a morality of fulfilling known destiny and the personal free-will necessary for agency. They suggest both a galaxy of possibility and free movement and a limited channel of feasible options that perennially return to light sabers, space battles, and children granted binary oppositions between becoming and not becoming their parents, as though no other options actually existed for them. END_OF_DOCUMENT_TOKEN_TO_BE_REPLACED