Say all you want about Werner Herzog or Wim Wenders, but the undisputed frothing mad king of the New German Cinema will always be Rainer Werner Fassbinder, a director who matched Herzog for sheer raving asymmetry and bellicose rabies and equaled Wenders for unbridled empathy and quiet cinematic majesty. His deeply volatile, unsavory films rode horses inconstantly and threw caution to the wind, and they were dueling reflections of a mind that was itself in inconstant descent. Fassbinder, mercurial and never metronomic, barely passed the decade mark as a film director, but the singular impression he left on the cinematic landscape of the world remains indelible. No director could match him for entropic cinema that nonetheless attained its own sort of dissociative cohesion and snowballing sense of purpose. END_OF_DOCUMENT_TOKEN_TO_BE_REPLACED 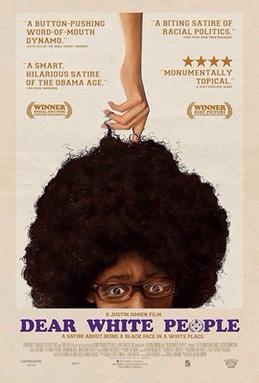 “Preachy” is a word critics, both amateur and professional, throw out like they see the next Woody Allen movie; regularly, with businesslike efficiency, and knowing full well they are dragging themselves to an early grave in the process. We do it all the time, in other words, even though we know it isn’t good for us. There is nothing wrong with a movie with a high opinion of itself, or a low opinion of others, or a point of view it stands proudly and angrily in favor of, as long as its bite matches its bark. I’ll take a sermon any day, as long as that sermon is delivered with all the fire and brimstone a preacher can muster. When it comes to cinema, I’d rather watch a preacher than a lecturer. About the latter, all I can do is pray.

Dear White People has trouble splitting the difference. It certainly aspires to dress up in its finest lecturer’s garb, boasting information, interrogation, and an army of viewpoints on its side. Justin Simien – who directs and writes – exposes the contrast between the pale, cleanly, rigidly formal halls of fictional Winchester University, a vulcanized Ivy League pretender if ever there was one, and the dirty, barely functioning remarks and eyes that leer across those halls. And across the personal identities the halls would feign to make whole. For four African-American students at Winchester, college is a corporeal dress-up process of mental and ideological norms masqueraded by physical ticks, friend choices, extracurricular activities, and self-sacrificing identification gamuts. Who they are, in other words, becomes a process both social and personal of deep double-consciousness, and while some react to that doubled identity with open arms, most find some aspect of their personality left wanting. END_OF_DOCUMENT_TOKEN_TO_BE_REPLACED

I cannot, in all honestly, fully denounce any motion picture that is photographed by Roger Deakins, but Unbroken sure puts in its best college try. Even Deakins, evoking mystery and dread in a number of shots, is going through the motions here, and the film’s most endearingly chiaroscuro frames function as little more than pictorial convulsions of superficial beauty, adding absolutely nothing to the texture and tone of a film that doesn’t have much use for Deakins’ insurmountable knack for rendering even the most mundane landscape with all the rugged fantasy and mythical imagination of a storybook. END_OF_DOCUMENT_TOKEN_TO_BE_REPLACED

It is entirely possible that Big Eyes signals a new phase of Tim Burton’s career. Upon the death rattle of the vaunted “I actually care about my films” phase fifteen years ago, he went on a decade sabbatical in the tar pits. Or the cotton-candy pits, I suppose. Big Eyes is something of a lift-off away from the muck he grew to shill out throughout most of the ’00s, but having removed himself, he has not necessarily set himself on a new course.

If, as some have touted it, Big Eyes is a return to form of sorts, then I must ponder what form they are speaking about. Certainly not the wonderfully demented goblin form that ran a mutiny against the doldrums of conventional middlebrow cinema and resulted in, all within a phantasmagorical decade-long run, the wonders of Pee-wee’s Big Adventure, Beetlejuice, Edward Scissorhands, Batman Returns, Ed Wood, and Mars Attacks (along with the odd misfire like the original Batman thrown in simply to remind us that Burton was a mere mortal). True, Big Eyes is not nearly the worst Tim Burton vehicle; many of Burton’s recent films were not even really films, but garbage dumps. Big Eyes, in comparison, at least has the functional shape of a motion picture. But it is not an especially invested one by those standards.  END_OF_DOCUMENT_TOKEN_TO_BE_REPLACED

Brian De Palma made a career out of sequestering the erogenous zones of Alfred Hitchcock’s high-class gutter-trash and cheekily admitting to and perverting the suspense-maestro’s more titillating habits. He scrubbed Hitch down to the bone, leaving the material wide open for its more adolescent fixations to rush in. He was always accused of lessening Hitch’s provocative exploration of the internal human mind in external camera space. He was accused of turning Hitch into misogynist smut. The complaint holds water; one would not stack Dressed to Kill, or any of De Palma’s films for that matter, up against Vertigo and expect a fair fight.

But it also misses the broader point, De Palma’s point: Hitch was a smut peddler too. A magisterial one, a beautiful one, a perfect one, but a smut peddler no less. De Palma knows – he idolizes Hitch for it, but he also interrogates him – and Dressed to Kill is a dare: admit to ourselves that we know it, or suffer the consequences of sterile, dishonest criticism and the perpetual need to rub away the immediate urges that guide audiences to all manner of films, not only the uncomfortable, disreputable likes of De Palma. Dressed is a reminder, queasy and necessary, that we do not only hide our eyes at the first whisper of Bernard Hermann’s nervous panic attack score to the shower scene; we also watch because cinema caters to our reptilian brain. END_OF_DOCUMENT_TOKEN_TO_BE_REPLACED

Another little issue with acquiring films, so 1979 is coming before ’77 and ’78, but with such a life-affirmingly innocent and upbeat film on tap for ’79, I expect you won’t mind…

Werner Herzog just hates you, doesn’t he? Or maybe he loves you, and his eyes just perk up for a merciless prank on the audience, and a prank on everyone he’s ever met or worked with. Immediately upon finishing the demented tirade that was the demonic carnival shoot of Nosferatu: Phantom Der Nacht, he grabbed his partner-in-crime Klaus Kinski, or at least Kinski’s eyes (and the man’s stone-faced body went with him). Soon enough, the two were already hot on the tail of another obsessive quest to lose their minds once and for all. Okay, “immediately upon finishing” is very likely a touch of authorial romanticism on my part; rumor has it the two walking threats, after completing Nosferatu, took at least a handful of days off to celebrate their latest maddening cinematic monstrosity in between their ritualistic trips to the torture chambers. Within a week of finishing Nosferatu, though, they just up and quit celebrating and went back in to the pits of torture for another film. Then again, for these two, you have to wonder if self-torture was a form of celebration after all… END_OF_DOCUMENT_TOKEN_TO_BE_REPLACED

It ought not be a surprise that the greatest cinematic study of American iconography, both tangible and nebulous, was unearthed by a German. That film is not Kings of the Road, a sort of slantwise proving ground for greater things to come. It was Paris, Texas, a later film by Wim Wenders and a film whose name evokes the sentimental but bristling irony of a slice of Europe in America. Wenders was that slice, always infatuated with American cinematic styles and moods but trapped in the mortal coil of separation from his ideological homeland, with an unforgiving body of water blocking his way to the land that his heart so clearly desired. END_OF_DOCUMENT_TOKEN_TO_BE_REPLACED

You don’t feel the seasons in many movies. You don’t feel the grip of the seasons on the humans that would threaten the natural locales that beckon those seasons. You don’t feel the weight of temporal weather and the last forbidding gasp of a season’s tectonic force before it fades away having unleashed the heftiest dying breath it could fathom. You do not feel winter, especially. Frequently, the shorthand for the most temperamental of seasons is a lot of pale white, but we seldom see the nebulous majesty and the tactile dampness of a winter that vacillates between elegant and cruel, often both in the same moment. END_OF_DOCUMENT_TOKEN_TO_BE_REPLACED

I have written before that, more than any other cinematic movement, the French New Wave was a line in the sand. If so, Jean Esutache’s The Mother and the Whore is very likely the only film ever to divide up the line, or to redraw it. Not only that, but it draws on the face of the New Wave mythology by casting the mask most commonly associated with the movement – Jean-Pierre Léaud – as a blasé, wandering pseudo-intellectual with an endless pool for inhuman pontification but precious little wells of human warmth. He falls for a nurse named Veronika (Francoise Lebrun), less out of any joy found lurking in her personhood than in a blank need for sex that circles around his personhood like a vulture. He lives with his girlfriend Marie (Bernadette Lafont), who provides the lion’s share of his money, but he plays her as he plays Veronika; as objects and passive beings for him to use as he sees fit. Then, play is a questionable word. That would imply a passion in his heart, but from the beginning of the film until the very end, all we find is timidity and a pregnancy of nothing. END_OF_DOCUMENT_TOKEN_TO_BE_REPLACED

Martin Scorsese has returned to the poisoned well of his proving ground far too often. Mean Streets was a vivacious, convulsing snarl of Catholic guilt and post-French Connection inner-city rot. Taxi Driver deepened his fixation on perverting classical Hollywood with a clanking, cantankerous pile of scrap metal as his weapon of choice. Raging Bull perfected all of his pet themes, themes he would relapse to a decade later when things got difficult and he needed a genuine corker of a gangster pic to build up a little good will again. Since then, having earned his cred already, he has too often made the fatal mistake of drinking the water of his own making again and again, and he’s built up a resistance that makes his new films on the same subject seem ironclad in a certain respectable distance and stateliness that devours their energy and liveliness. When he made The Departed, a fine film, he was doing nothing but reheating old leftovers that tasted better thirty years before. The genuine shape and form was still there, but the fascinatingly pungent odors and the sharp acid of the taste was gone. END_OF_DOCUMENT_TOKEN_TO_BE_REPLACED