The protagonists of the 2018 version of the oft-adapted A Star is Born may be the rugged, ragged country singer Jackson Maine (Bradley Cooper) and the younger rising pop star Ally (Lady Gaga). But the film’s voice undeniably belongs to another character, Jackson’s older half-brother, played with a typically phenomenal mixture of world-weary cynicism and weathered wit by Sam Elliot. Essentially the film’s viewpoint, Elliot’s character rebukes criticisms about its remake status by explicitly and perhaps charitably thematizing the value of playing within formulas and dusting off older routines in an early line of dialogue. As if the film is commenting on itself, this traveling soul seems to know, more than his younger brother who still believes in a more singular notion of originality, that there are limits to self-fashioning, and that all selves are cobbled together piecemeal out of influences far and wide. Elliot’s itinerant would-be cowboy reiterates what prior American wanderers Whitman and Emerson understood as the tragic possibility of realizing that you live in a world where all you can truly do is quote creatively.

Elliot’s character thus not only provides Cooper his voice but gifts his movie its thesis, not to mention its point of view. And, of course, its mildly self-congratulatory excuse as well, the film’s way of avoiding the challenge of more overt experimentation while committing to the belief that all experimentation is itself a similar form of play within existing structures. Of course, the film is correct in suggesting that creativity really is just skillful reconsideration of forebears. But that doesn’t necessarily let the film off the hook for, well, not doing much in the way of genuine reconsideration.

Elliot’s voice is the film’s in a second sense as well: Cooper’s protagonist sounds like Sam Elliot looks, and the gravelly hoarseness of both performances is also part of its relative fascination, as well as its thematic commentary. Another line of dialogue seems to acknowledge that Cooper’s character chose to model his voice off of Elliot to achieve some simulacrum of “authenticity,” suggesting that Maine’s swaggering machismo is a performance, a kind of costume meant to articulate an American creed. The film suggests that no one is really born a rambling man; through a combination of social circumstance and personal will, they become one, even at the expense of other, perhaps more humane and generous, versions of self. END_OF_DOCUMENT_TOKEN_TO_BE_REPLACED

Perhaps the most consistently banalized of all prestige genres, the “Oscarbait biopic” has recently emerged as an idiom for self-complicating narrative cinema. But the Oscarbait biopic can take many forms. For name-conscious auteurs seeking to problematize the individualist Oscarbait formula, with its focus on personal growth and salvation at the expense of wider social or material realities, this kind of film typically allows filmmakers to produce popularly legible dramas while paying attention (and often, frankly, lip service) to social issues. For other, often more artistically inspired filmmakers who frequently nonetheless run the risk of drowning in their personal myopic, biopics tend to center characters who are facsimiles for the creators of the films themselves. It was impossible to miss director Damien Chazelle in the main character of the decidedly agitated Whiplash or in either of the protagonists of La La Land. Neither film had any itch to explore a world outside the nearly hermetic glory of personal creation, each suggesting a kind of laudable final artistic transcendence that, in the first case, might mean the loss of a character’s soul, and in the second, the loss of a companion.

First Man’s Neil Armstrong, in contrast, is essayed as a kind of blank canvas and evacuated man by Ryan Gosling. He also, I suspect, really isn’t meant to be Neil Armstrong. I’m not sure how much Chazelle sees of himself in Armstrong, but it doesn’t really matter. Although this new film misses some opportunities, and its central character’s steadfast determination and essential dismissal of anything resembling a personal life may be read as further proxies for Chazelle, it is testament to First Man – indeed, it may be why the film is meaningful at all – that it is the first of this director’s films where the protagonist isn’t a myopic recreation of personal psychology so much as a Rosetta Stone for a culture, a time-period, and an ethos. And, at times beautifully, for the film’s own self-conscious limits in exploring that time-period.  END_OF_DOCUMENT_TOKEN_TO_BE_REPLACED 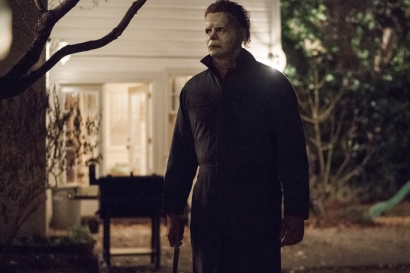 Far be it from me to dictate the direction of writer-director David Gordon Green’s artistic career, but if you had told me circa 2000 that the hot young thing in the American independent scene, brandishing an aesthetic equal parts Malickian-impressionism and Cassavetean-pragmatism, would, in less than two decades, be shepherding forth a 21st century model of the series that spawned the slasher sub-genre…well, I would have asked who David Gordon Green was. I would also have been 8, so I might not have been the ideal audience for any of David Gordon Green’s films, except maybe Pineapple Express (which itself capably mobilized Green’s leisurely, slow-drip, transcendental filmmaking sensibilities toward a very different kind of transcendental human experience).

In the last decade, however, determining whether Green has taken his projects out of a desire to test himself, out of a genuinely idiosyncratic directorial sense, or simply because he had too much pineapple express, has become something of a cinephile ritual every time he releases a new film. Recently, in 2017’s Stronger, he settled into a more conventional version of the low-and-slow dramas which birthed his career and, in 2015’s Our Brand is Crisis, attempted an uneasy, intermittent triangulation of those earlier films with the strange, side-trip pot comedies he so famously stumbled into at the end of his first decade as a filmmaker. Those two recent films are perhaps Green’s safest films yet: far from the sublime, scrappy elegance of his early ‘00s films but certainly hemmed in from the truly despicable lows of, say, 2011’s awful Your Highness. One might have assumed Green had settled into sturdy, indifferent middle-age, cinema as his day-job, not his life-calling. END_OF_DOCUMENT_TOKEN_TO_BE_REPLACED