It is quite possible that Richard Linklater is the only currently functioning director who really could have directed A Scanner Darkly in the fidgety, twitching tone it so desperately begged for, and thus it is a little bit of magic that he managed to acquire the film at all. Firstly, this is because Linklater, the homegrown Texan with an eye for slacker culture and the distance imparted by time and memory, strips away the science fiction trappings from Phillip K. Dick’s story and renders it all the more pressingly intimate in doing so, without ever sacrificing the essence of the novel about drug abuse and melancholic social anomie. Which is itself important; so many science fiction films rationalize themselves by claiming they are necessarily informing us about the weight of a current world crisis, but as many other Dick adaptations show us, they frequently devolve into glorified techie action flicks. The science becomes a diaphanous masquerade, a meager attempt by a film to convince its audience of its intelligence when it offers nothing but pyrotechnics and quasi-futurism. Linklater doesn’t need a trip to the future; he creates a piercingly grounded tale about trips of a different variety. END_OF_DOCUMENT_TOKEN_TO_BE_REPLACED

Ain’t Them Bodies Saints is little more than a New Hollywood pastiche, a loving and careful waxworks recreation of a style and type of cinema that was at one time, a great many years and Hollywood eras ago, the most lively and startling thing to ever happen to American cinema. As a film, David Lowery’s recreation of that style has not one new idea to bring to the table the New Hollywood built out of rustic, unpolished wood and then abandoned long ago. All Lowery is doing is digging through scrap heap, separating out the noble rust from the ignoble variety, and refashioning it into a garage sculpture where the very nature of the metal – falling apart, worn to the point of triteness – is a badge of honor, a reminder of how old this sort of tale really is, and how lively it can still feel when it is carted out after it hasn’t seen the light of day in too long. It doesn’t offer a new idea, but it offers a more humble reminder: in the New Hollywood of the 1970s, we now see not only a scorching fresh breath into the room of Hollywood’s musty old classicism, but a peculiar, well-worn form of old-timey comfort. Those New Hollywood films are now part of the classic American cinematic tradition, and Lowery is merely playing a requiem for them. END_OF_DOCUMENT_TOKEN_TO_BE_REPLACED

Let us begin with the obvious: Grindhouse is a confused beast, asking to indulge in two feature length works of varying quality (both between the two and within individual features) that do not tackle the grindhouse aesthetic from the same vantage point as one another. On top of this, we have four trailers that do not adopt the spirit of the movies around them, nor are those four trailers in unison with one another. Let us approach this murderers’ row: Robert Rodrigeuz’s Planet Terror, a high-flying zombie movie starring Rose McGowan and a postmodern descent into the aesthetic that tackles it to the ground so hard it that words like “luridest” must be invented to explain it away. Quentin Tarantino’s Death Proof, a confusing beast of a somber, stoic serial killer film starring Kurt Russell as Stuntman Mike, a killer with a car as a weapon. Stopping and starting in fits and spurts, Death Proof subverts expectations by rejecting and even flaunting the audience’s desire to be wowed by its lunacy. For it is, in contrast to Planet Terror, not a lunatic of a joke, but an actual film, played straight. On their own, then, we have two films that are very much of a different order and a different form, but we will get back to this.
END_OF_DOCUMENT_TOKEN_TO_BE_REPLACED 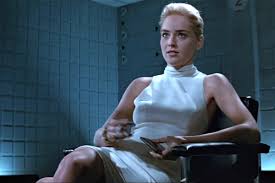 Joe Eszterhas, at the height of his power and world-damaging, rampaging misogyny in 1992, gifts Basic Instinct with an absolutely torrid, huffing, wheezing, terrible screenplay. This much cannot be denied. Everything about the screenplay insists and states that which it could have implied, adds in unnecessary and morally offensive complication whenever it can, and generally lives by the motto “why say something better when we can say it more?” It is a bottom-feeding early ’90s erotic thriller screenplay if ever there was one, indulging in the stupidest amounts of shoddy characterization and faux-drama it possibly can. It is as if he lost a bet and had to write it and market it against his will. Except, of course, Joe Eszterhas doesn’t seem to have a kind view of women, let alone lesbian women, and, from his other screenplays, we can assume he loved damn near every word of his oppressive money-maker.

END_OF_DOCUMENT_TOKEN_TO_BE_REPLACED

With no new long-term features hoping about The Long Take for the time being, I’ve decided to do a few short features on directors of my choice. Each should take about a week, focusing on some of their more notable films and trying perhaps to capture their essence as a director. These will mostly tackle directors I haven’t much explored yet, and will probably take on directors with a sort of noticeable aesthetic or sense about them so that their films achieve a cohesive singularity while still retaining individual wrinkles. For my first feature, I’ve decided to look back through the cinematic works of Terry Gilliam, who I think we all can agree is one of the most unique directors of the past several decades to say the least. Enjoy!

It’s a good thing ex-Python animator Terry Gilliam dreamt up Time Bandits in the late ’70s or early ’80s. I cannot tell whether he did so before the sci-fi/fantasy push of the late ’70s and early ’80s, or whether the thought of Star Wars and its success wandering around his brain and taking up air pushed him toward the inklings that would birth Time Bandits, but once, and perhaps for the only time in his life, the stars aligned for Gilliam. His previous film Jabberwocky, his first solo directorial effort, was released in 1977, and this early year, still trapped in the high-minded cynicism of the mid-’70s, was not kind to Gilliam nor to fantasy as a whole. Really, the world wanted nothing but to double down on angst and paranoia during those hard times. They wanted cinema to comment on society, to explore it. The late 1970s presented a new option: the long-lost history of the cinema as escape. And in escape, it too would comment on how society needed the cinema, and why the cinema would always be there for it.
END_OF_DOCUMENT_TOKEN_TO_BE_REPLACED

The most shocking thing about The Act of Killing is that it is not a documentary about the governmentally sanctioned mass murder of suspected Communists between 1965-66, at least not in the strict sense. In fact, the entirety of Joshua Oppenheimer’s searing documentary is about these killings, but it is about them as they exist today, and in the mind. Oppenheimer’s modern-day film tasks men who took part in the killings with recreating fictional variations on their most heinous acts, and in doing so it ever so slightly shifts its focus away from the killings as they happened and onto the killings as an experiential concept, how the men who took part in them relate them to the world of fictional film, and how we as an audience interpret the act of cinema viewing in relation to the violence done by cinema-goers in the real world. It is about the violence of the mind, and the violence of cinema. The Act of Killing is a nasty, harrowing work about the past, but it tells a far more timeless, more undying tale about the relationship between humanity and fiction. In doing so, it not only explores the past and the present with a brutal eye for wicked human depravity, but it manages some of the most forward-thinking cinema of its decade.  END_OF_DOCUMENT_TOKEN_TO_BE_REPLACED

A man is tempted by an insidious, curvaceous force that feigns the feminine form and he slowly finds himself wound up like a ball of yarn for the cats’ night out. That’s how Vertigo begins, but only in the most superficial sense how it dissolves. It stars James Stewart as Scottie Ferguson, a private eye hired by a friend to spy on the friend’s wife Madeline (Kim Novak), whom the man believes is possessed by a familial specter who has long overstayed her tenancy in the human body. Soon enough, Scottie finds himself in love, and perhaps so too does Madeline. Things truck along in ghostly romantic chiller fashion from this point on, but director Alfred Hitchcock couldn’t resist slopping some blood on the tracks.

In 1958, Hitch was on top of the world, but he was about to blow the roof out. Over the next three years, he would release perhaps his tripartite masterpiece, spinning wildly from the psychoanalytic modernism of Vertigo to the boisterous, brash thrills-a-minute of North by Northwest, and sticking the landing with the black-hearted chiller Psycho, which would forever redefine horror filmmaking. All apologies to his latter two efforts, Vertigo is his time-capsule piece, and arguably the most singular and unclassifiable American film of released post-Welles. The reason for the film’s success is simple: it is quite clearly Hitchcock having the most fun he ever did behind a camera, cackling some of his most dementedly grotesque chuckles in the process. It’s a maddening, cataclysmic, ungodly little curio that plays a downright mean trick on the audience, and goes home laughing all the way. END_OF_DOCUMENT_TOKEN_TO_BE_REPLACED