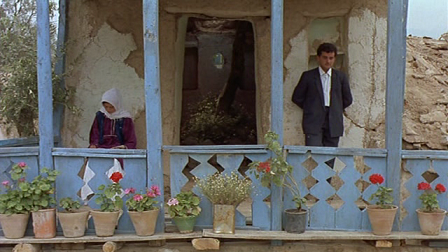 A spectrum of heterogeneous voices and layers of reality rhyme with one another in Abbas Kiarostami’s Through the Olive Trees, a seemingly meta-textual work without any of the narrative gamesmanship or self-conscious striving for iconographic importance that characterizes most films in the post-modern idiom. Kiarostami loves cinema too much and is too taken aback by the empathetic, observational powers of his medium to abstract it to a narrative game or an analytic formal exercise; his films remains low to the ground, in the trenches of being, alive to the anecdotal energies that frizz within the rural Muslim community Through the Olive Trees sets its eyes on. END_OF_DOCUMENT_TOKEN_TO_BE_REPLACED 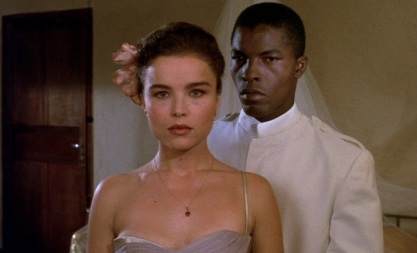 Claire Denis works in a slightly different idiom from many other filmmakers who train their eye and heart on the landscape of Africa, mainly because she is plainly aware that there are clear if not quite terminal welters in her relationship with those filmmakers. Namely, she is white, and they aren’t. More than that, she isn’t African, although her memories of growing up the daughter of a colonial civil servant in French West Africa inform her every film. Colonial history shadows her every film, but also a sense of fragile distance, an attitude of not only forbidding and crippling economic and psychological depression but of being withheld from that depression, of a European child who lives in African but unmistakably confronts it partially as vacation-land or fairy tale. A child only aware in fits and spurts of the oppressive economic shackles upon which her life is built, who sees her family’s black servant as friend, father, and many other things, but not necessarily understanding that he is forced into that position, or that he operates out of coercion. END_OF_DOCUMENT_TOKEN_TO_BE_REPLACED 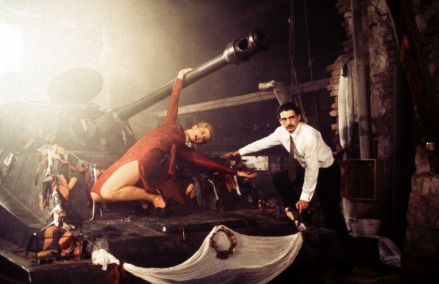 Like a flash of incandescent light that’ll burn your eyebrows off while staring into your soul, Emir Kusturica’s Underground is the film Roberto Benigni’s Life is Beautiful wishes it was. Even more indebted to a theoretically cloying magical realism than Life and yet so disturbed and delectably flaring in its madcap intersection of styles, Underground is a paean to not only human life but cinematic life excavated in the death throes of crisis. Imagine if you will Vittorio De Sica directing Abbott and Costello with a script written by Billy Wilder with Benny Hill on trombone just in case, all of whom were alternately inebriated and cocaine-addled during the production, and the beguiling war-time-as-apocalypse-rave-as-long-cavern-of-the-soul milieu of Underground is at least intimated in your ear. END_OF_DOCUMENT_TOKEN_TO_BE_REPLACED

László Nemes’ Son of Saul is above all a treatise on cinematic minimalism, eschewing visual resplendence only as a way to belie how carefully modulated its visual command of its subject truly is. Tethering its audience to the face of main actor Géza Röhrig not as an anti-formalist gesture but as a haunting lament toward the unclassifiable nature of trauma, Son of Saul surreptitiously removes event to its periphery as a way to reveal that which can’t be formally, objectively understood through any direct visual gesture. It is perhaps the film to most dexterously utilize the corporeal weight of the Holocaust as a case-study for the tangled spindles of memory and cinematic representation since Alain Resnais’ seminal Holocaust feature Night and Fog. In comparison to, say, Schindler’s List, Son of Saul defies any mass-scale anthropological interpretation as fundamentally incomplete. Even more than The Pianist, Nemes’ film recalibrates the Holocaust film so that any attempt to formally order it within a cinema frame – innately containing it and subjecting it to a sort of classifiable definition – is a whiff of historical wishful thinking. END_OF_DOCUMENT_TOKEN_TO_BE_REPLACED

David Cronenberg’s horror-show visual vernacular isn’t exactly the obvious lexicon for reimagining Don Delillo’s famously literary prose, but this gross, improbable collision of styles – a bewildering intersection between the maximal and the minimal – accrues a near-omnipotent surrealism over the course of Cosmopolis’ dead-by-day car-ride odyssey. Set primarily in the limo of a youthful billionaire (played with a sullen, zombie-like, quasi-ironic, and entirely fitting detachment by Robert Pattinson) during a car ride expedition to a hair-cuttery on the other end of New York, Cosmopolis morphs into a prismatic, unsettled excursion by its end that doubles as long-day-of-the-soul and a fantastical tryst with absurdity and the essential entropy of life. END_OF_DOCUMENT_TOKEN_TO_BE_REPLACED

Julia Leigh lowers the kinesis down to a zombie plod in Sleeping Beauty, a film that is pointedly not smitten with fertilizing or justifying anyone’s sexual intoxicants. Deeply analytical and fire-retardant, it is easily written off as a concrete slab of ice rather than a fibrous expression of vivid life. But there’s ice as an end point and ice as a beginning, and Leigh uses her tempered-down tone as a jumping off point for wider thematic questions. She doesn’t reject life for the sake of it in service of an empty exercise in nihilistic austerity. Instead, she applies her iciness as a way to navigate usually-carnal visual spaces and trap them, and to implicate audiences in a certain voyeurism (trite, I know) without turning the piece into a hedonistic, Hitchcockian riff on diabolical debauchery. Some of the ideas are wanting, but Leigh overcomes the relentless intellectualism of her work (and the film feels like work, make no mistake) by exploring her walking-dead aesthetic sensibilities with innately gifted craft. END_OF_DOCUMENT_TOKEN_TO_BE_REPLACED

A tonal collision between live-wire cinematic kinematics and ice-cold debasement animates Park Chan-wook’s alternately madcap and doleful Oldboy,  a film that was destined for worship by a particular brand of youthful cineastes who revel in corrosive provocation more than trenchant filmmaking. A meditation on revenge enlivened more by panache than what might be denoted as depth, Chan-wook’s illustrious film nonetheless thrives simply as a cinematic lightning bolt. Its observations about self-propagating violence and soullessness are hardly revisionist or revolutionary, but Chan-wook’s reputation as a guiding light of South Korean cinema rests more on enthusiasm and dynamism than clarity. On that front – and this is not a front to be taken lightly as a font for experiential cinema that aims for the gut – Oldboy, however tenuously it arrives at more substantive ends, does not disappoint. END_OF_DOCUMENT_TOKEN_TO_BE_REPLACED 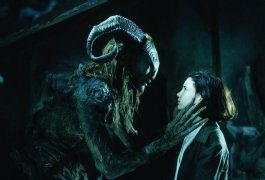 A decidedly outre expression of childhood trauma, Pan’s Labyrinth is a wartime fantasy from the deranged, consequence-ridden non-American realm of classical fables filtered through the oblong mind of one of modern cinema’s great dreamers. A bifurcated (unnecessarily, I might add) tale of adult conflict and childhood coping set against the Spanish front during WWII (when Franco’s repressive government was fighting ragged rebels), the most poignant gestures of director Guillermo del Toro’s vision are his most voluptuous and baroquely nightmarish. END_OF_DOCUMENT_TOKEN_TO_BE_REPLACED

One must undeniably validate the valor and reflexivity of one of the few cinematic treatments of the Holocaust by an honest-to-god Holocaust survivor, but a good critic must also remember that bravery doesn’t inherently beget beauty. Director Roman Polanski’s troubled, torrid life aside, The Pianist – if a masterpiece – ought to withstand the test of time on its own merits, rather than on the shoulder’s of Polanski’s personal story, difficult though it may be to disentangle the two.  No one film should be a sycophant to its back-story, fascinating though the behind-the-scenes realities of The Pianist may be.  END_OF_DOCUMENT_TOKEN_TO_BE_REPLACED

Legend would have it that, after decades of wallowing in admittedly pleasurable crypto-conservative roles, America’s resident taciturn brute Clint Eastwood shocked the world in 1992 with an unprecedented critique of the craven, callous dueling violences at the core of the American tradition. But masterpiece though it may be, Unforgiven was hardly unprecedented to those who were looking. Eastwood’s prior directorial efforts in the genre that made him a household name had flourished nearly two decades beforehand with only his second feature, the unfinished but highly spirited (the spirit being an angel of death in this case) High Plains Drifter, a counter-myth that saw in the Wild West something more akin to an Italian giallo. More fully formed was the sublime The Outlaw Josey Wales, an often misread work of mythic Western nihilism so full-throated in its interrogation of  Western archetypes that no one seems to understand it to this day. END_OF_DOCUMENT_TOKEN_TO_BE_REPLACED