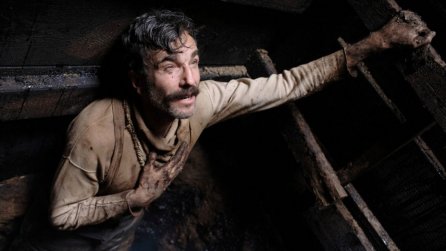 The acme of Paul Thomas Anderson’s self-conscious plundering of the American cinematic canon, There Will Be Blood is so freighted with importance and fraught with visions of its own mythical, apocalyptic dimensionality that it would crumble under the sheer girth of its own doom-laden edifice were it not so classically skillful and crafty. Plunging right into the heart of not only Upton Sinclair’s short story “Oil” but centuries of canonical American masterworks, There Will Be Blood jumps headfirst over Anderson’s scruffy Altman fetish and sets its sights on the mac daddy of American filmmaking: Citizen Kane. It’s truly a cinematic Icarus, attempting to rope together a century of prior national cinema, cut through the fat, and encroach on – and then tyrannize and desecrate – the American sublime. It’s a foolish and foolhardy quest that Anderson’s film is destined to fail at, but bless it for trying. END_OF_DOCUMENT_TOKEN_TO_BE_REPLACED

With two images of social collapse under his belt, writer-director Paul Thomas Anderson wisely made the decision not to repeat himself with his first 21st century film. Magnolia was akin to dropping a bunch of loose human animals in a preserve just to experiment, even if Anderson never lost his personal compassion, never diminished his characters to mere subjects of analysis. Magnolia was also a monolith, a messianic and almost apocalyptic vision of life at the end of the 20th century that (fairly successfully) interpreted depth as only a question of breadth. Understanding its subject was equated with conquering any and all subjects, consuming monoliths with a hubristic and unerring pull to complicate through augmentation, amplification, and magnification. Which, glorious though that film was, also sacrificed a certain intimacy, out-sizing the boldness of its landscape and its “visionary” status at the expense of its ability to register untold personal truths, to intimate the unvoiced longings and desires at the core of its tale but sometimes drowned out by the grandness of the camera, the monumentality of the sound, the exorbitance of the design. END_OF_DOCUMENT_TOKEN_TO_BE_REPLACED

After a decade or so building up his reputation as the heir to the throne of Kubrick, Scorsese, or Altman (depending on one’s critical proclivities, or the specific scene one is viewing), writer-director Paul Thomas Anderson’s edifice has since lightly toppled, or at least begun teetering. He has thus far spent the 2010s in a mild critical comedown. But, perhaps having attained the mount, he’s also fallen a dizzying, wholly edifying route, pirouetting with grace and exploratory abandon by virtue of his will to test his own mettle rather than rest on recapitulating past glories, often one’s borrowed rather than conjured on his own. Only in the 2010s has Anderson finally cultivated his own genuinely contradictory style, and folded in the parallel and perpendicular tendencies of his forebears, say jittery Scorseseian nerviness, soft and humanistic Altmanesque woundedness, and calculating Kubrickian brutality, in intoxicatingly heterodox ways.

With his two films of the decade preceding The Phantom Thread, he both deliberately plays up his inscrutably high-brow and his incredulously low-brow tendencies, often thinning the membrane between the two until the safety of assured boundary is nonexistent. First up was The Master, his highly elliptical, self-consciously masterful analysis of mid-century loss galvanized in two human figures whose relationship is liminally slotted between father-son, not-quite-lovers, master-servant, and allegorical two-sided-Janus-head. After Anderson spent five years on this follow-up to his rapturously adored There Will Be Blood, audiences were certainly expecting (hoping for?) something less willfully alienating. But what they got was an atomic-age potboiler and a grandiloquent melodrama walking into a bar, both flattened under the all-seeing eye of searing 70mm art-house muscle.

The Master may seem a little too capital-A artistic for its own good, but beneath the film’s beauty lies a subterranean labyrinth of lost American dreams, haunted ambition, and aimless humanity just searching for an exit. It’s the first of Anderson’s films to truly wander with errancy, to move with the fascinatingly irregular, haphazard sense of its characters hesitant, staggered attempts at human connection and belonging. The first of his films to speak with his characters rather than for them. The first not to calculate its self-consciously limber camera glides with a stuffy, overly-manicured perfectionism and over-determined striving for greatness. It’s the first of his films to harbor a subcutaneous element, to expose the push-pull between explicit social revelation and private intimation, the first of his films aware of the opacity its characters carry and cultivate in their attempts to preserve their individuality apart from society even as they search for a facsimile of family amidst mid-century American disenchantment. END_OF_DOCUMENT_TOKEN_TO_BE_REPLACED

More traditional and individualistic – almost fiercely so – in comparison to Steven Soderbergh’s more heterogeneous panoplies of varying voices, textures, and tones, Erin Brockovich doesn’t always do more than glisten, but boy does it. It’s pure pop, and it’s easy to criticize Soderbergh for heading in that direction after the more experimental (and better) The Limey.  But no modern filmmaker oscillates between his experimental personal projects and his only-slightly-less-personal commercial properties with Soderbergh’s frequency or his gusto, let alone his singular ability to thin the membrane between private experiment and populist fare so thin that there often isn’t a difference between the two. (Consider the exhaustive meta-textual star-commentary and celebrity hang-out anti-caper film Ocean’s Twelve). Who can blame him for making Erin Brockovich when a fanatically experimental and alienating film like Full Frontal is right around the corner? Or, for that matter, who can blame him when his feather-light pop nothings like Erin Brockovich are this wonderful? END_OF_DOCUMENT_TOKEN_TO_BE_REPLACED

A wonderfully low-wattage, free-verse odyssey and a quiet parody and embracement of classical mythopoetic adventures, King of the Hill’s structure lacks the jostled tempo of director Steven Soderbergh’s more revolutionary films, but inconsequentiality, here, is where the heart lies. A tapestry of repetitions and minute improvements in identity and possibility, King of the Hill is a bildungsroman of a more everyday sort than a classical Greek tragedy.  The adventurer in this case is Aaron Kurlander (Jesse Bradford), an eighth grader in Depression-era Saint Louis whose mother (Lisa Eichhorn) is in a sanitarium for an unspecified disease, whose father (Keroen Krabbe) is a travelling watch salesman who goes on long trips to Kansas and Iowa, and whose younger brother has been shipped away to live with his extended family so his parents can save on money. END_OF_DOCUMENT_TOKEN_TO_BE_REPLACED

This review is based on both parts of Soderbergh’s film taken as a whole.

Navigating Steven Soderbergh’s Che is an almost impossible task for the lover of the conventional biopic (a group I am not a member of). Yet judging Che against those biopic standards is perhaps essential for its study in a collapsed man. The almost unanimous criticism of the film – that it gives us little insight into Che Guevara the man – is both entirely astute and indefatigably myopic. It is simultaneously missing the point and exactly the point. Watching Che, it is almost impossible to decode the seeming cipher of a man it presents, but “impossible to decode” is a neutral claim that many viewers take to be a negative or a problem. It is a feature that is assumed a flaw. Their opinion isn’t incorrect so much as it is, in my opinion, limited, the casualty of an individualistic Hollywood formula that threads the membrane between character psychology and maturity so thin that one would be ostracized simply for claiming that there may just be other pathways to truth beyond burrowing into the subcutaneous traumas and fixations of the man whose name adorns the movie poster. That’s because Che isn’t merely a biopic but a thought experiment. Viewed from this angle, it isn’t primarily a study of a person so much as an essay on the nature of revolution. END_OF_DOCUMENT_TOKEN_TO_BE_REPLACED 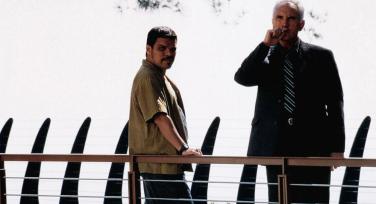 A mercurial exercise in pure cinematic economy, a gangster tale cut-up and reinterpreted through director Steven Soderbergh’s shattered-glass editing, The Limey is Point Blank dressed up as Hiroshima, Mon Amour. Actually, that’s dismissive. The Limey doesn’t don the exterior garb of a modernistically scrambled study in memory. Soderbergh’s film feels modernism down to its very core. It cracks into pieces before our eyes, and in protagonist Wilson’s mind. Played by Terrence Stamp in the performance of his life, Wilson is the lightning-rod around which Soderbergh’s coiled energy and recklessly frazzled editing anti-rhythms commune. END_OF_DOCUMENT_TOKEN_TO_BE_REPLACED

Logan Lucky, the comeback film of the formerly-but-not-really-retired Steven Soderbergh, is out this month, and the return to cinema of one of the great filmmakers of the past quarter-century is obviously something to celebrate. I’ll do so with a few reviews, the only way I know how.

Nominated for two Best Director Oscars in one year, Steven Soderbergh won for Traffic, arguably his peak harmony of critical and commercial success and among the most piquant Best Director wins ever. Within reason, of course. It’s still an Issue film, so it’s in the Academy’s wheelhouse. (They’d never do the unthinkable and commit heresy by giving it to a genuine work of directorial singularity like, say, Wong Kar-Wai’s, Edward Yang’s, or Bela Tarr’s films from the same year, Stanley Kubrick’s from the year before, Terrence Malick’s from the year before that, or David Lynch’s from the year after Traffic. You get the picture). But for a somewhat safer film, as well as a work where the “experimentalism” is programmatic and pampered enough to be immediately obvious to any viewer, Traffic is a volatile, agitated, uncovered nerve of a movie just waiting to be poked. END_OF_DOCUMENT_TOKEN_TO_BE_REPLACED

It is immeasurably difficult, even impossible, not to crack the glossy lens of “keep it on the screen” in Under the Volcano, peering behind the frame to explore the harsh climate of personal disfigurement and torment in director John Huston’s life. The comparison isn’t unwarranted; it may even be begged for. Huston wanted the film, much as he actively pursued all of his late life projects (perhaps livid with his work-for-hire reputation). And the protagonist, an aging British diplomat in the perpetual downfall of alcoholism wasting away his time in the oppressive Mexican heat, bears an unmistakable imaginative resemblance (if not a physical one) to Huston himself, deeply sick at the time of production and nearing his last bow after decades of severe alcoholism and smoking had withered away his features and left what might be considered a husk of a man in their wake. The comparison catalyzes a reservoir of brutally tormented emotions and hand-crafted, personalized filmmaking on Huston’s part, no doubt, but it also elides the fact that, in Under the Volcano, the primed, pared-down potency of the screen most assuredly speaks for itself. END_OF_DOCUMENT_TOKEN_TO_BE_REPLACED

John Huston’s career caught the literary bug, an inspiration that quickly, sometimes detrimentally, opened a Pandora’s box he couldn’t close. I mean, the dude erected his career in one fell, volcanic swoop with his debut feature, The Maltese Falcon, an adaptation of a famously convoluted and uncinematic Dashiell Hammett novel. Not to be outdone by his debut, Huston, perhaps in a fit of near-death delirium, concluded his career directing his daughter in an adaptation of that most holy of unfilmable authors: James Joyce (admittedly, Huston went for the big gun of the small gun short stories with “The Dead” from Dubliners, but reaching for something like Ulysses would have been sheer Icarus-inspired lunacy). Ironically, Huston himself was often compared to Hemingway for his no-nonsense virility and the tensile strength of his dead-on filmmaking, putting him at a stark remove from the likes of the infamously spindly, present-tense, tonally fluxional Joyce who was perhaps Hemingway’s polar opposite. END_OF_DOCUMENT_TOKEN_TO_BE_REPLACED