Addams Family Values is a comedy sequel with a difference, and that difference is director Barry Sonnenfeld. Not only Barry Sonnenfeld, of course. Writer Paul Rudnick’s screenplay has a wonderfully droll eye for ’60s sitcoms and a deliciously sideways slant on how to turn middlebrow Americana on its head, and it provides game food for a veritable cornucopia of scenery-tearing actors playing to their ostentatious, blistering best. It’s not quite agitprop, but for a blockbuster comedy with a relatively girthy budget, it plays shockingly recklessly with its audience and comes close to holding its knives right to their face. A great deal of this critique is openly part of the text of the film, with a sub-plot featuring two of Charles Addams’ pugnaciously demented Old Money family members, Wednesday (Christina Ricci) and Pugsley (Jimmy Workman), going to town on the smarmy corporatized Main Street Americana icon that is the summer camp.
END_OF_DOCUMENT_TOKEN_TO_BE_REPLACED

As a rule, Tim Burton’s interpretation of “film” works best when it has a guiding light and a vision. In the early 1990s, Burton was about the most visionary mainstream American director you could find, doing nothing less than sneaking away with oodles of money from the Hollywood producers he played uneasy servant to and using that money to paint his personal fixations all over the screen. In recent years, he has become a passe parody of his former self, creating gluttonous products that feel more like someone’s idea of a “Tim Burton film” than the real deal. But the passion, the lusty Americana, and the campy, Christmas tree fuel-for-the-fire went away long ago. Money, as it so often does with directors, has made Burton a blase Hollywood director-for-hire. But for this enfant terrible, boredom was not always the rule of thumb… END_OF_DOCUMENT_TOKEN_TO_BE_REPLACED Right from the beginning, Planet of the Apes settles itself on a nexus between tactile action and implacable inaction. The prologue, set on a spaceship as astronaut George Taylor (Charlton Heston) throws his throaty baritone into a mission log, establishes the very 2001: A Space Odyssey sub-Kubrickian cosmic chill of the material. Taylor, along with Landon (Robert Gunner) and Dodge (Jeff Burton), are on an amorphous vision of an intentionally nebulous, even pointless nature; what matters is not where they are going or why, but the existential frostiness of the pallid white of the ship’s interior and the very present deadened quality in Heston’s worrisome but unconcerned voice.
END_OF_DOCUMENT_TOKEN_TO_BE_REPLACED

Yet it was that inept side character, and not the smarmy jewel thief, who proved the immediate success story, so much so that he was written hastily into another screenplay to facilitate another vehicle for the character to generally mess up the place and lack a clue. That character, Inspector Clouseau (Peter Sellers) proved a most unlikely attraction to strike a chord with an audience; buffoonish, insistent, and doughy in both his messy confusion and his inability to admit to his inability to do anything else except be confused, he was a ’30s screwball side-character who had inexplicably skipped a few decades and stumbled into his own feature film series in the ’60s. END_OF_DOCUMENT_TOKEN_TO_BE_REPLACED

Another relatively short new feature to round out the month, this one about so-called “entertainment” films for the masses in the 1960s. Even when they weren’t doing much of anything else, films from this decade, the golden-age of gee-shucks entertainment, sure knew how to pop!

I like to think title puns are beneath me, but with a name like The Magnificent Seven, what can I say? The fact is, John Sturges’ film is a quintessential Sturges film, which is to say, although it is not a magnificent artistic statement, it is magnificently entertaining, and beneath its rough-hewn, leathery, functional exterior it hides a secretive, slick-as-can-be cool that hurtles the film forward toward and into conflict like a steadily mounting hurricane. Sturges isn’t a filmmaker of tricks and theme, but of steely, note-perfect technique, a man who didn’t have the eye of a great stylist but very much benefited from the hand of a great storyteller. And, although it doesn’t have anything under its sleeve, the tailor on the sleeves is so fine and perfectly measured in The Magnificent Seven that it is almost impossible to mind. END_OF_DOCUMENT_TOKEN_TO_BE_REPLACED

Yankee Doodle Dandy really doesn’t make it easy for itself. Consider the strikes against it. It is a Grand Old Biopic madly in love with its own subject matter. It is filmed by a director, who, for all his multitudinous strengths, was never all that invested in subverting or transforming his screenplays, a filmmaker who drew his vigor and interest precisely from the subject matter and the screenplay he was tackling. It is also a quintessential work of matching a great actor to an important historical figure, just about the biggest talent-suck set-up any film could possibly dread. With a performance and a subject to fill the box office and wow the middlebrows, a director has carte blanche to indulge in all the soporific tendencies of a screenplay, to blindly and blandly fill the screen with blasé Important Moments rather than to actually prop up the storytelling with invigorating artistic gestures. It is, in other words, a work that was dead in the water – artistically speaking at least – even before its release. END_OF_DOCUMENT_TOKEN_TO_BE_REPLACED

At some level, we must concede that Michael Curtiz was more of a filmmaker of efficient craftmaking than superlative artistic ambition; this sense of getting-the-job-done pervades even his masterpiece, Casablanca, but gosh darn it, well-oiled-machine filmmaking has never been more delectable than Michael Curtiz filmmaking. The perpetually underrated master of the craft was no auteur, nor did he want to be, but his films sparkle with single-minded clarity and blunt craft like nothing else from the Hollywood machine in its early days. Again, he was a studio guy for Warner Bros and he always operated with a sort of humility to his stories that saw him not so much take control of them and do with them as he would; rather, he focused on a propulsive forward movement to his tales, a sort of inescapable quality that made the stories feel like they were telling themselves first and foremost. Yet Curtiz was always there, making functional filmmaking the food of the gods and cutting through the fat to produce films that, if not entirely perfect or challenging in the most overt of ways, were at east the most perfect versions of themselves. END_OF_DOCUMENT_TOKEN_TO_BE_REPLACED

It must be said: excepting The Matrix, no single film has done more harm to the modern cinema industry than Pulp Fiction. The old “every filmmaker who saw it made their own movie” card is the great equalizer, uniting genuine talents and hacks alike. But in the case of Tarantino, the results were far from equal. A few genuine craftspeople followed in his wake, but they were diamonds in the rough compared to the far more significant cohort of filmmakers who whipped Tarantino into a frat boy’s wet dream and perverted his vision of cinema from the ground up. Largely, this has to do with Tarantino’s supposed “cool factor”, the superficial blanket hanging over all his films that has beckoned first-timers the world over to ape his penchant for slick, sick violence, whirlwind camera jerks, and self-consciously fantastical style. This style has always been a noose around Tarantino’s neck, and it has strangled the world of cinema for years to come. END_OF_DOCUMENT_TOKEN_TO_BE_REPLACED 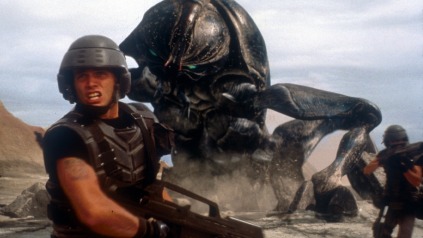 In order to properly understand Starship Troopers, one needs to understand its casting. At some level, casting is the de facto entry point for any of Verhoeven’s American films over the decade from Robocop to Starship Troopers. Total Recall, although somewhat muted by its need to be an Arnie vehicle, definitely gestured toward using the big lovable lug as a critique of the idea of an Arnie film. More successful was Basic Instinct, where Verhoeven cast a seemingly unaware and genuine Michael Douglas more for his weathered, aged wrinkles and flagellating variant of all-American thuggery. And one doesn’t need to explain Showgirls these days, a work where Verhoeven cast (cruelly so, at that) the young whippersnapper Elizabeth Berkeley and forced her through all manner of gross, grotesque abuses on screen in a meta-commentary on the way in which her character, and young Hollywood starlets altogether, are forced to go through the wringer to find success, leaving others in their wake and losing their dignity and respect for themselves as they forced to do the unthinkable.
END_OF_DOCUMENT_TOKEN_TO_BE_REPLACED

Having finished the extended yearly New Wave series that somehow held me hostage until well into the mid ’90s, I’ve decided to go back to a couple of reviews I had milling about but didn’t make it into the yearly bit. Both are related formally in that they star Gene Hackman and more existentially in that they illuminate important realities about the cynical ’70s that frighten like few films we can think of, and which may be more relevant today.

Viewing The French Connection in 2015 is a tall order, for the time period it exists in and its rampant amoral cynicism toward roguish individualist heroes seems increasingly ungainly today (even as it still pervades and even anchors our individual-smitten culture). The 21st century likes its cynicism to be of the slightly-masqueraded-by-humanism variety, and not the primal and primitively muddy variety exhibited by the early ’70s. William Friedkin’s The French Connection wholly defines this milieu, and increasingly stumbles into problems with its racist hero and its cautious way of staring him down without necessarily coming to terms with him. In today’s concerned world, The French Connection increasingly seems like a naively cynical product out of time with a none-too-well-guised fascist streak, a movie unwilling to address its problems and indebted to a form of cynicism perpetually stuck in a state of arrested development.
END_OF_DOCUMENT_TOKEN_TO_BE_REPLACED