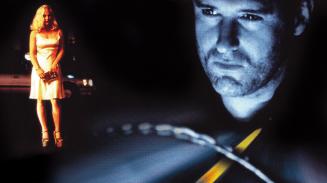 With Triple Nine looking all vaguely neo-noirish and me having already reviewed director John Hillcoat’s notable films, I’ve decided to look at a handful of films from the last heyday of the neo-noir: the 1990s. And of course David Lynch …

David Lynch’s Lost Highway begins with a paragon of the untrammeled cinematic id. As the pulpy, pop-fried credits announce themselves on the screen like pugnacious fighting words from the darkest bowels of Lynch’s gut, the camera hurtles on a forward trajectory to hell itself, a slithery, avant-garde David Bowie melody doing violence to the darkness of the screen before us. This is the noir expunged of propriety, excised from the surface level world and headed straight to the dustbin of male inadequacy. END_OF_DOCUMENT_TOKEN_TO_BE_REPLACED 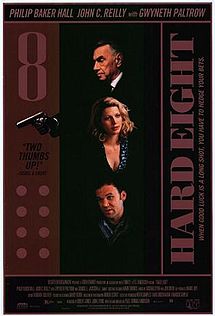 With Triple Nine looking all vaguely neo-noirish and me having already reviewed director John Hillcoat’s notable films, I’ve decided to look at a handful of films from the last heyday of the neo-noir: the 1990s. I  wish I hadn’t already reviewed Seven, because then I could really pull a “seven, eight, nine” joke right about now. Oh well.

Paul Thomas Anderson loves him some Robert Altman, and he damn sure wants you to know it. Boogie Nights is his Nashville, Magnolia his Short Cuts, There Will Be Blood his McCabe & Mrs. Miller, and Inherent Vice his The Long Goodbye. Both directors are united in their attenuation to social ennui and their sweltering pop fantasia takes on the perils of American fiction and everyday life propelled on the back of scorching camera motions (Magnolia’s most famous sequence plays like a cocaine nightmare version of Altman’s prodigious love of zooming his camera into every nook and cranny of the Earth he could overturn). END_OF_DOCUMENT_TOKEN_TO_BE_REPLACED 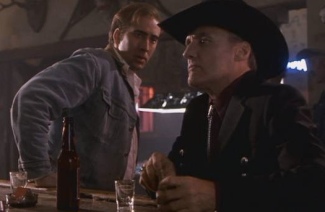 With Triple Nine looking all vaguely neo-noirish and me having already reviewed director John Hillcoat’s notable films, I’ve decided to look at a handful of films from the last heyday of the neo-noir: the 1990s. Of course, because it is the 1990s, we must begin with two Nicolas Cage vehicles, as you do.

When Cage’s character saunters into a Wyoming town in search of a job that just won’t coalesce, fortune turns against him and the decrepit rot and turpitude of rural American bite back. After all, in the type of town where everyone knows everyone, you can’t really hide. In this perverted Western landscape, the very idea of “heading out West” is upended and downtuned, besieged by more than a modicum of deceit and turmoil chiffonading the American Dream into enough mincemeat to fill Monument Valley itself. For a sepulcher to forgotten dreams, it’s a hoot, and the cemetery of a forest that engulfs the town of Red Rock at night ain’t half bad either.

Admittedly, Dahl doesn’t strike a chord as a natural born genius, but he’s a sharp enough tack and a journeyman of palpable suspense and playful subtext, most notably when he undoes the largesse-laden Texas drawl of Cage’s character at the seams. This laconic, pulpy film coils like a writhing king snake but it manages to accrue nervous energy without the accompanying nosebleed of solemnity or self-imposed meaning. In fact, Dahl’s wry comedic edge delights in letting us know how precipitous the film is, how rough-around-the-edges its denim-clad drifter of a yarn may be; it’s as if it’s being constructed before our very noses. Rather archly, it contorts the noir tradition of chance begetting bad habits by finding the light for Cage’s character in chance itself. Luck enjoins the story into motion, and luck concludes it. Cage is just wandering through, writing notes that no one believes and sliding into easy lies that everyone does. 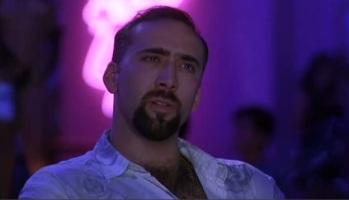 One of the strangest films to ever appear at the Cannes film festival, Kiss of Death is a neo-noir that isn’t quite dressed to kill, but it at least has one pant-leg on, even when it’s tripping over it. Lead man David Caruso is a wet blanket, Helen Hunt is waddling around in neutral, and the screenplay is less a movie than a murderer’s row of fascinating scenes loosely tethered together in the same room. But, accident or not, Kiss of Death stumbles into its fair share of oddball menace and mendacity.

Barbet Schroeder is a capable stylist but no auteur, and viewed through the lens of 1995 with heavy-hitters like Seven, Devil in a Blue Dress, and Fargo rattling or skulking into theaters on either side of it, Kiss of Death definitely feels outclassed amidst the competition. But with vociferous neo-noirs less thick-on-the-ground these days, one can appreciate Kiss of Death’s more modest pleasures, some of which relate to Schroeder’s agreeably strangulating tone and acrid arctic blue chills. The film doesn’t really coagulate the neo-noir atmosphere it so clearly pines for; the bizarrely over-lit hues accrue a pop-fried thriller sensibility instead, which is somewhere between a lateral trade and a slight step-down. Puckering up the piece with zest and zing are molotov cocktails hurled by a motor-mouthed Michael Rapaport, a slithering Stanley Tucci, and a weathered but hectoring Samuel Jackson. There’s a whole menagerie of incandescent, peppery energy twirling around the edges here.

Plus, Kiss of Death boasts an injection by an inspiringly cocaine-addled Nicolas Cage on the eve of winning an Oscar and diving headfirst into leading man status that would quickly turn his entire career into a toxic cloud of vacillating insufferable and endearing inanity of the first order. Excise Cage’s scenes for your own film a you can see a twinkle in Werner Herzog’s eye, fulfilled a decade and a half later with the vastly underrated Bad Lieutenant sequel. 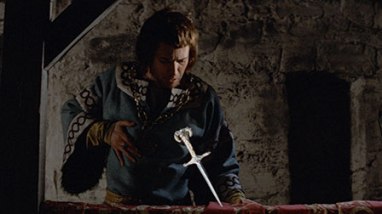 Having finally caught up with Justin Kurzel’s Macbeth, I decided to take a look at the cinematic version it owes itself most readily to.

The appeal of Roman Polanski’s earliest films is much the same appeal of Emily Dickinson’s lust-stabbed poetry: sheer, giddy brokenness. Like Dickinson’s disturbed capriciousness and orgasmic hyphens that sever the natural rhythm and flow of normal meter and sane minds, Roman Polanski’s early films come to us spastically, errantly strewn about as bits and morsels and shattered carcasses stricken across the land. The corrective tissues appear almost nonexistent, the cartilage lost to time and unstitched. His early films are cinema without forebears, with ’70s grotto smashed into the theatrical slabs of pre-modern cinema Polanski adored quietly but no less vociferously than the haute couture modernism en vogue during his era. Watching Cul-de-Sac or Knife in the Water is like watching an uneasy mind of clamorously clashing style and unfixed pre, post, and midsexual urges vacillating all about over the canvas without inhibition. END_OF_DOCUMENT_TOKEN_TO_BE_REPLACED 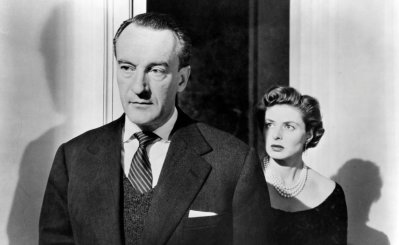 The neorealist corpuses of Vittorio De Sica and Roberto Rossellini – comrades in arms, yes, but figures whose similitude belies discrepancies in their works – have been cordoned off into the same space for so long you half forget they were actually different filmmakers at all. Yet De Sica’s world of omnipresent off-screen space maundering around the edges of open frames only shares partial similarities with Rossellini’s works. What both filmmakers did unite under was a continual, restive thrust not to rest on singular definitions of neorealism, an insatiable desire to experiment with, and critique, the style that made them household names among connoisseurs of world cinema. END_OF_DOCUMENT_TOKEN_TO_BE_REPLACED 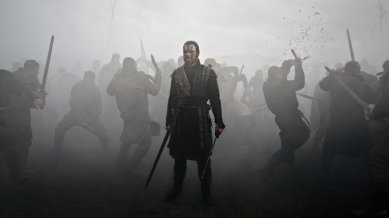 Generally speaking, the most striking cinematic Shakespeares are those that are the most strikingly cinematic. As a rule, hewing close to the stagebound play is a recipe for neutralization when delivered in a cinematic vessel. I wish no schadenfreude upon the Shake man himself, but arrant verbosity in a visual medium, especially in an adaptation of a play, is a harbinger only of a filmmaker’s belief that the almighty play is sacrosanct and immutable. A real artist instead uses the broad strokes to unpack the play as a palimpsest with lingering vestiges of theatrical memory interacting with modern themes and motifs to construct something new, bold, and visionary. If you love something, leave (most of) it alone. Pick out the necessities and find a new voice, your own voice, with it. END_OF_DOCUMENT_TOKEN_TO_BE_REPLACED 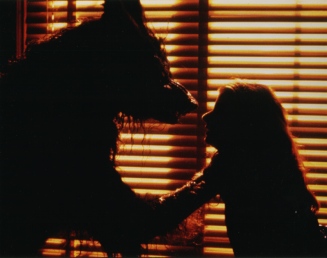 Writer-director Joe Dante is pop culture dead weight today, but in the mid ’80s he was the zeitgeist. A progenitor to the highfalutin sub-horror irony of Scream and a cornucopia of too-scared-to-admit-they-are-horror films in the intensely glib world of ’00s horror, Dante’s brand of irony was much less prone to the fraudulence of incessant hedging. His earliest films, Piranha and The Howling, upend horror tradition without fecklessly resorting to ingratiating pleadings of blasé, sycophantic self-superiority. They rib and tickle, but they’re also honest-to-god horror films, as marinated in tenebrous cinematography and bone-rattling sound as any films of their time. They tease us, but they do not trick us: they mean what they say, and they bite.  END_OF_DOCUMENT_TOKEN_TO_BE_REPLACED 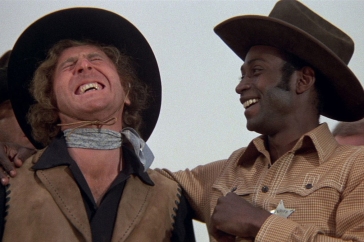 The more time that passes by and the more the comic world is besieged by laughter of both more incisive and more vulgar textures, the more that Mel Brooks’ brand of comedy seems like a product of a bygone era. Even its maladroit moments (the malodorous flatulence scene in the otherwise shockingly pointed miscreant that is Brooks’ best film Blazing Saddles) feel like innocuous nuggets of convivial atmosphere, currents from Mel Brooks’ sheer need to satiate his funny bone, and ours. The Borscht Beltier segments are as hokey and antiquated today as many of the establishment beacons Brooks was rebelling against. But Brooks is a munificent man, and his spirit shines through. His films amuse almost unilaterally on the back of the aching grin you can feel on Brooks’ face in every shot and with every line, or hook, or sinker. But Blazing Saddles is probably the only Brooks film that does more than amuse, the only one that doesn’t merely feel like Brooks pleasing himself. Saddles cuts right to the heart of an American genre, reflecting not simply a caricature of genre but a total collapse of it.  END_OF_DOCUMENT_TOKEN_TO_BE_REPLACED 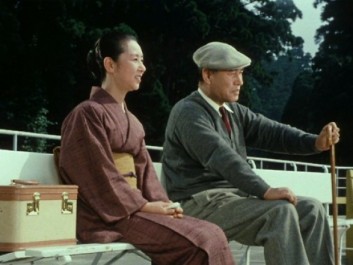 I’ve decided to post shorter reviews of various films I’m seeing for the first time via courses I’m enrolled in.

Yasujiro Ozu’s world is one of parsimoniously placed symmetries and laconic, ever-subtler shifts in human composition that form telltale signs of theme and character. Unlike most esteemed directors, he doesn’t rest on prodigal imagery or inflammatory dialogue, nor does he inundate us with restive tangents and dalliances with the absurd. His films are stingy with their carefully focused formalism, and as such are prone to claims that they are left wanting or overly enervated by their placid demeanor. Yet within Ozu’s ostensibly metronomic minimalism lies a gregarious, human vision of the world as a teetering, lightly fluctuating balancing act where the most hurtful of human tragedies is found in the most unadorned of images. In a world constructed out of pairings and balances, the disruptive elegance of a lone human face without a matching motion or figure is as tragic as the end of the world. END_OF_DOCUMENT_TOKEN_TO_BE_REPLACED

Something a little different I wrote for Taste of Cinema. http://www.tasteofcinema.com/2016/the-16-best-tv-series-directed-by-movie-directors/