I originally wanted to write this up in reference to the release of Craig Brewer’s My Name is Dolemite next week, without even realizing the highly appropriate irony that the last (only?) great Blaxploitation film was released almost one decade ago to the day.

It’s extremely tempting to refer to Black Dynamite as the sharpest cinema-parody of the ‘00s, at least among those parodies that take a cinematic form, except for the curious and altogether unexpected fact that the best moments in the film only register as “parody” by circumstantial virtue of being contained in a film we’ve been told is a parody in the first place. Case in point: the film’s most famous scene, a free-associative riff-off that begins with M&Ms, sidesteps into Ancient Greek mythology and cosmology, and wanders into phallus-related hijinks, before solving the film’s McGuffin with what amounts to a supreme imaginative leap on the screenwriters’ part. But it’s hard to call this riddle scene a “parody” in any meaningful sense.

Earlier, there’s a more overt reference to the planets: a fairly amazing verbal pimp-off where the elaborate abstractions of pimp culture verbal cosmology suddenly mutate into a quite literal cosmology metaphor that lies well-beyond-reason, the head pimp explaining his plan in terms of the earth’s axis. That joke is “about” Blaxploitation cinema, or at least about the impenetrable ridiculousness of the depiction of pimps in Blaxploitation cinema. And it’s a pretty great joke too. But Black Dynamite discovering the villain’s plot via references to Ares and Athena, for no reason? Is that a satire of cinematic deus ex machinas? Of characters conveniently gifted with screenwriter’s verbosity? Cinema parody, I suppose we could say, if we’re being generous, but certainly not Blaxploitation parody in any meaningful sense. The minds of the filmmakers are clearly well beyond the pale of a mere genre parody. END_OF_DOCUMENT_TOKEN_TO_BE_REPLACED 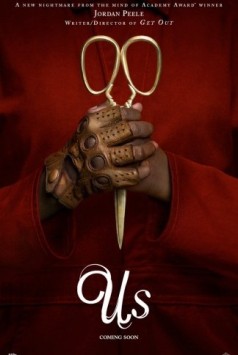 Jordan Peele’s Us bears many obvious linkages to Get Out, Peele’s 2017 box-office slayer, but Us feels less like a retread or even an update or extension of Get Out than a perversion, a disruption, a chaotic disfigurement of the earlier film’s elegant simplicity. Us is both more existential and more surreal, more playful and more brutal, and, above all, more experimentally distended, exhibiting a newly ravaged and warped texture that is very much to my taste, but not necessarily to those looking for a clean like of argumentation in the film, or even a clear subject. Get Out’s comparatively streamlined metaphor for sight, sightlessness, and embodiment was tight, vicious, and tenacious – perfect for itself, and perhaps for a first film – but not nearly so troublesome as Us, which actively and conspicuously refuses the snug moral logic and trimmed-down narrative of Get Out. Us isn’t avant-garde in any overt sense, but where Get Out’s story fell into place, this new film buckles, utilizing horror for its demonic textural and thematic elasticity and indescribability rather than merely as a generic skeleton for a moral parable. It’s storytelling by way of allusion, digression, and disturbance, a film that benefits or suffers greatly (depending on your proclivity) from writer-director Jordan Peele’s obvious enthusiasm overtaking his discretion, his ensuing disdain for hedging his bets and, probably, his frustration with heeding the rules and regulations of Hollywood storytelling. It’s as if, having mastered the art of skillful middlebrow horror cinema, Peele decided to dismember it. END_OF_DOCUMENT_TOKEN_TO_BE_REPLACED

Neoliberal American aimlessness is recoded as anticipatory national fantasy in Rambo: First Blood Part II, a film that both thoroughly disgraces the legacy of its progenitor and perversely fulfills the dormant desires which may have animated many viewers’ affection for the original character. That original film envisioned Stallone as a bruised dog. He was as inarticulate as any of his other characters, but his motor-mouthed struggles were construed less as a function of a screenplay disconnected from humanity (as in, say, Cobra) and more as a theme: the result of a nation and a man unable to vocalize their severe trauma and societal disaffection. The original First Blood, then, was a fairly doleful thriller about unmet expectations, a thoughtful meditation on American lapses that framed the US’ involvement in Vietnam as a national aporia that not only chewed out and spit up the soldiers but cast the whole nation adrift, leaving it to wander a moral wilderness.

Out of the many early ‘80s action films that dissected the corpse of the Vietnam war in one way or another, one would be hard-pressed to pick that Stallone vehicle as the likeliest candidate for a sequel of any caliber, let alone the sequels we received. There’s no obvious commercial reason why First Blood became the basis for its sequels, excepting perhaps Stallone’s success in another role in another franchise that had undertaken a similar rightward trajectory: the disaffected populist working-stiff boxer who had, with America’s rightward drift, metamorphed into America’s new Great White Hope capably defeating both black and Soviet enemies. Within the span of a few years, Stallone was no longer a cipher for a wayward everyman but an icon for American ego-boosting, the latent whiteness of his characters’ populism suddenly on full display as he became an American avenger. END_OF_DOCUMENT_TOKEN_TO_BE_REPLACED 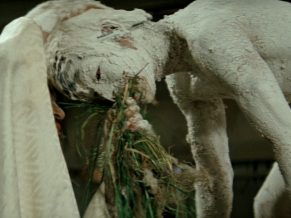 Many self-consciously “weird” motion pictures expend energy and time establishing a stable sense of cinematic self that they will only then destabilize later on, tweaking the style several notches south of sanity as the film progresses. Horrors of Malformed Men lathers the surrealistic absurdity on thick from the first shot. It introduces us immediately to a thoroughly dismembered reality, a cinematic hall of mirrors that finds us wandering into a B-movie and discovering a metaphor for Japan’s mid-century dreams of paternal control, familial destiny, and authoritarian anxiety, all (appropriately) malformed into a kaleidoscopic nightmare. The subject of the cinematic allegory? Deluded men working at any cost to recreate their lineage and preserve the fragile illusion of a linear, biologically-sanctioned family hierarchy.

In reality, though, Horrors of Malformed Men has already deceived me. “Discovering a metaphor,” I wrote, but Horrors of Malformed Men is too slippery to cleanly metaphorize, and too playfully deceitful to simply allegorize; either of those terms would enervate the film’s demented energy. The film works because it’s less an encapsulation of a theme than a poetic evocation of a mindscape. It also thoroughly dismisses the obvious compulsion to domesticate its difference by applying some trivializing “dream” narrative filter to everything; it certainly feels like a dream, but primarily and possibly only because it does not explain itself as one. It’s a crazed dispatch from a director that plays like a country experiencing the mid-century as a fugue state. The film discharges the psychic tremors of a ruptured nation that disorient the very formal fabric of the film. END_OF_DOCUMENT_TOKEN_TO_BE_REPLACED