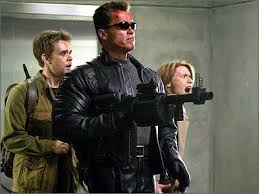 Terminator 3: Rise of the Machines

In 1984, The Terminator was a chilly, conniving, nihilist-humanist animal of a movie, and in 1991, T2 confronted the world as an operatic exercise in baroque fire-and-brimstone pyrotechnics. Both, in their day, were game-changers, and if the sequel’s charm has faded slightly, it still gets points for what it accomplished at the time. Even if the nebulous concept of “bigness” was the purpose for T2 – and a purpose director James Cameron has returned to time and time again to limited results – it was, when all was said and done, a purpose. Both films worked, ultimately, because they were masterminded by a man with something to prove. In 1984 it was his name as a filmmaker at all, and by 1991 merely the fact that he could humbly direct the de facto most technologically-savvy film of all time. Different hopes for different folks, as they say, but both set the man ablaze with passion to make a film. END_OF_DOCUMENT_TOKEN_TO_BE_REPLACED 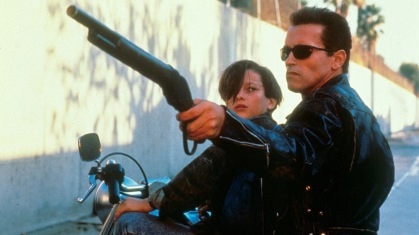 Because of that other Terminator film recently released, trying its best to soil the name of a once-mighty franchise.

James Cameron’s Terminator 2: Judgment Day is not the film its predecessor, also directed by James Cameron, was. For largely the same reasons that James Cameron’s Aliens is not the film its predecessor, not directed by Cameron, was. 1984’s The Terminator is a more urgent film than 1979’s Alien, but they share a similar sensibility: relentless, unforgiving, nihilist, purposeless terror always lashing out at you, married to perfect filmmaking that traffics in both show-not-tell and not-showing-is-scarier-than-showing. Alien is an outright horror film masquerading as a sci-fi film, and although The Terminator is more comfortably an action film masquerading as a sci-fi film, it trades much closer to horror than you might expect. END_OF_DOCUMENT_TOKEN_TO_BE_REPLACED 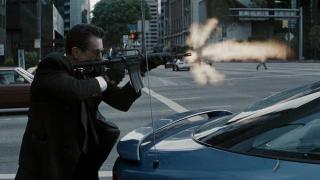 There are precious few directors that know how to wield a single scene quite like Michael Mann. His single greatest moment behind the camera belongs in Heat, a mid-film bank heist that overflows into a stuttery shootout that mashes together the rhythms of an urban jungle, the pageantry of an urban carnival, and a geometric fascination for odd, cutting edits and fascinatingly counter-intuitive visual storytelling. The shootout is one of the most perfect action scenes ever filmed, one of the most perfect scenes of 1990s cinema, and a startling showcase for a director who defines life as a collection of people (usually men) wallowing in their own danger until those men overflow onto each other and bubble till they erupt.
END_OF_DOCUMENT_TOKEN_TO_BE_REPLACED 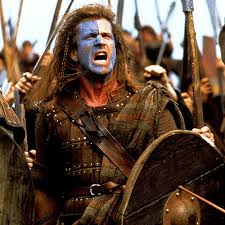 Because when I finished this series on 1995 I totally forgot to review two of the biggest films from that year, and I wanted to fill the gap…

The criminally conservative Braveheart is a tough sell in 2015, although it plainly isn’t so tough for director-star Mel Gibson. For all the damage he has done to both his own reputation and, more importantly, human progress in the ensuing decades, he is a passionate filmmaker, and in all three of his directed features, his love for cinema shows through. Questionable, problematic love that tends to hurt his films as much as it helps them, but a bastardized form of love nonetheless. In Braveheart, you find love in the luminous, misty myth cinematography by John Toll – which captures Scotland as it exists in myth more than reality and does the lion’s share of the work to overcome the film’s relentless problems with historical accuracy. You find love in Gibson’s grossly fetishistic, awestruck joy to observe men in the primal ballet of hacking limbs away from one another. You find love in his bald, open-hearted treatment of the Wars of Scottish Independence through the lens of a grandstanding 1950s Douglas Sirk melodrama, where any and all emotions are excuses to lose oneself to inhibition. Mel Gibson is many things, but he is not a cautious man, nor a cautious director. A Mel Gibson film goes big, or it goes home. END_OF_DOCUMENT_TOKEN_TO_BE_REPLACED

With Jurassic World’s 500 million global first-weekend box office take, it is already commonplace to glorify the return of a franchise that has been some combination of long-dormant and actively awful for almost two decades now. Championing its return to quality is not a new point, although it is an incorrect one. Jurassic World is a bad film. Not only that, it is peculiar and abnormal in its badness. A great number of corporate tentpole blockbusters are soulless and mediocre – look at Age of Ultron just a month post-release – but seldom are they bad in a particular and notable way. Corporate spending on audience-testing mandates that blockbusters will be spic and span, not necessarily good, but not disconcertingly or notably bad. They may be corporately bad, or bad in a sterile way, but not specifically bad, and not especially bad. Jurassic World does a great many things that are specifically, especially bad, and that is, if not a good thing per-se, at least an accidentally worthwhile one. END_OF_DOCUMENT_TOKEN_TO_BE_REPLACED

Jurassic Park was directed by an auteur who was a kid at heart and had it in his dreams to create a new pop-fable for the modern age. Having tackled sharks, nazis, and aliens, dinosaurs were really the only foreseeable future in his career, and the rampaging success of Michael Crichton’s book Jurassic Park was as good an excuse as any to pursue that dino-dreaming. The end result was not a healthy meal, but it was a particularly fizzy soda and buttery popcorn even in its worst moments, and we critics cannot argue with Spielberg when he is using his fullest talents to commandeer the screen and throw us into our worst nightmares.

The Lost World: Jurassic Park, released just four years later, was directed by a crusty old auteur who had better things to do than make pop fluff, and it shows. Spielberg, “the man with Oscars on the mind,” was in full swing in the late 1990s. It wasn’t his best mode, but it devoured both his serious films and his blockbusters in a layer of dreary somnambulism, suffocating whatever energy and zest he had for layering fun onto the screen. The Lost World is a tired motion picture, and even in its best moments, it has a slow-going, self-serious demeanor that coats the film in an unearned sense of importance. It is Spielberg trying to make a wacky puff piece out to be a heavingly serious drama.  END_OF_DOCUMENT_TOKEN_TO_BE_REPLACED

A little late on this, but in honor of Tomorrowland, here is another, more successful, Disney attempt to turn a theme park attraction into a live-action film, a success that has haunted their follow-up attempts to this day…

Pirates of the Caribbean: The Curse of the Black Pearl is a little bit of lightning in a bottle. It shouldn’t work; in fact, it didn’t just ten years later – when the principal actor and director teamed up again with a similar tone and dollar signs in their eyes, only to be trounced by generally divested cinema-goers and critics. It didn’t work the half-dozen or so times that Hollywood has tried to return pirates to the mainstream since the end of their heyday ransacking Hollywood way back in the misty yesteryear of the 1930s. And it didn’t work just the same year The Curse of the Black Pearl was released, when Disney took two other Disneyland/ Disneyworld rides and made films out of them, both to negligent box office results and dismal critical failure. END_OF_DOCUMENT_TOKEN_TO_BE_REPLACED

Christopher Nolan has always had a problem with his inner thoughts drowning out his ability to make compelling cinema, and the companionship of David S. Goyer in the writer’s chair has never been rectifying. Case in point: The Dark Knight Rises is a belabored mass of hang-ups, side-treks, false starts, hasty endings, and ignoble intentions. On the latter, the film’s villain Bane (Tom Hardy) – who turns Gotham’s poor against its wealthy so that he can profit in the end – is a troubling figure of social dejection and husky sooth-saying radicalism, and he is, without a doubt, a symbol for the false intentions of working class leaders, or Nolan supposes. If the superhero genre is a card-carrying caretaker for traditionalist individualism, libertarian democracy, and the American Way, The Dark Knight Rises is the flag-waving stalwart with a mouth for the status quo. It makes no bones about its fear that the working class is a raving groupthink machine defined only by its inability to restrain itself, lying around in wait for an opportunity to search and destroy and just hurting for an anarchist fight. END_OF_DOCUMENT_TOKEN_TO_BE_REPLACED

Seven years after the rubble has cleared, The Dark Knight feels like a fundamentally different, more elemental film than it did when it arrived in theaters as a sacrosanct mass of loose ends about the fate of the superhero genre and the death of a man who would go on to win an Oscar. Christopher Nolan has released three films in the ensuing years, his cryptic, somewhat belabored style has imposed itself a little more unambiguously onto the viewing public, and The Dark Knight feels like a legitimate product instead of simply a nebulous idea of how to save the comic book adaptation. It also feels, mercifully, like a work that exists on a human plane, and not some sort of holier-than-thou untouchable object, as it has frequently been touted to be by the fan-people of the world.

Admittedly, a sharp, incisive, pointed product when all is said and done, and if The Dark Knight doesn’t conclude the very idea of cinema, its veritable craft is pushed right up to the surface and wholly ready for the tasting. And it’s not all Heath Ledger for that matter, although his maelstrom-of-chaos performance as the evil Ferris wheel of social dislocation named the Joker approaches us more as “villainy” than a specific villain. His performance is also, importantly, a marker for the true essence of The Dark Knight, and the crux of its move away from pure naturalism. We have thankfully moved from the idea that a film being more “realistic” is necessarily a compliment, rather than simply a fact of existence or a feature, and The Dark Knight is at its best when it exists as a parable of the modern age, or a fable, rather than a work of realism. Little about Ledger seems frightening in a naturalist way, because the film doesn’t aim for naturalism; it has much more frightening ideas about the thickets of human nature that can’t be captured in an ascetic commitment to pure realism. END_OF_DOCUMENT_TOKEN_TO_BE_REPLACED

The comic book movie in 2005 was entrapped in its own split-decision bifurcation. On one hand, the likes of Elektra and Fantastic Four were omnipresent holdovers from the 1990s and markers of a genre strangling itself into childish submission. On the other, Robert Rodriguez’s Sin City sought to experiment with the comic book form as an avenue for pure cinema, and David Cronenberg’s A History of Violence was caught taking the medium of cinema to task with the violence of the human condition. Both were attempts to push the comic book medium to new depths, but both also tacitly exposed the limits of the superhero genre by eschewing the likes of Spider-Man or Superman for stories that, at their structural elements, had very little to do with the tradition of the comic book. Just as the comic book had grown up and left some of its inner core back in the minds of teenagers, so too was comic book cinema moving away from the fluff and the puff and toward something a little more brutalized and tragic. END_OF_DOCUMENT_TOKEN_TO_BE_REPLACED