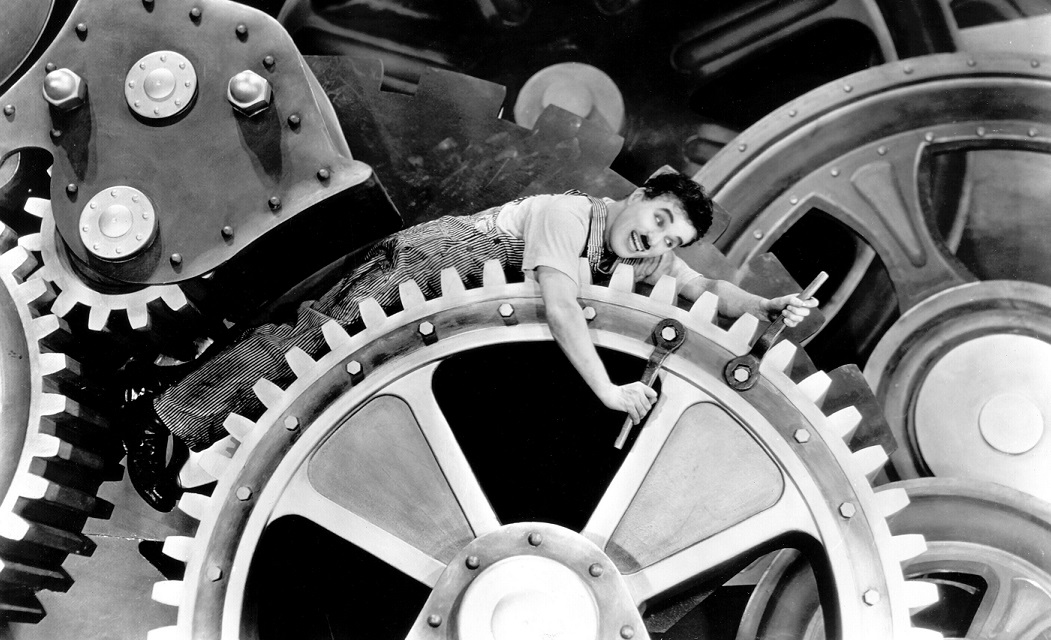 Charlie Chaplin was one of Hollywood’s earliest and largest stars, a filmmaking polymath who performed, directed, composed, produced, and wrote all of his films, a one-man brand who in Modern Times subjects himself to a possibly fatal question: whether he can escape being branded by the hot iron of capital. A British socialist who grew increasingly frustrated with American capitalism and Hollywood business practices throughout his career, he eventually left Hollywood and returned to his native England. Like many silent filmmakers, many of his earlier films explore questions of new technology and skeptically arouse the possibilities of modernization, thinking-through the relationship between new technological forms – both industrial and cinematic – and asking how one navigates modernity. Of course, many of his anxieties about industrial technology were also motivated by his own issues and frustrations with the rapidly growing Hollywood industry, exposing parallels between industry on-screen and industry in Hollywood that seem more prevalent in Modern Times than in any Chaplin film before or since. This is the film in which the personal will displayed in The Kid – where his Tramp character strategically manipulated capitalist products for new purposes with his mental ingenuity – seems to have been finally overpowered by capitalism’s singular ability to manipulate his body as the ultimate tool to its own ends.

Chaplin’s most famous character – the Tramp – was easily identifiable to most Americans, brandishing his top-hat and cane and what would be called the Chaplin mustache. The style of his earlier films tended to emphasize the homeless Tramp as an unmoored figure who had no place in society and had to creatively adapt to survive, refashioning everyday objects from their normal purposes in the swirling, fluctuating world of modern capitalism where, as Karl Marx said, “all that is solid melts into air”. His most famous silent comic rival Buster Keaton tended to fashion his films as linear trajectories, placing his character on train-tracks, moving forward on the way to modernity – locomotives shooting into a technological future – depicting characters who struggled to control these modern-day technologies. Keaton fashioned comic parodies of success narratives in the American tradition, mocking the idea of individuals pulling themselves up by their bootstraps. Chaplin’s Tramp, comparatively, has no bootstraps, and as an iconic vision of working-class resourcefulness, did not traverse space linearly or pull himself up; his comic movement was much more unstable, much more slippery, much more uncertain. He fashions capitalism as something which requires comic creativity to survive. This is why Chaplin’s definitive visual symbol is the circle, his characters frequently forced to run around and around with no end, suggesting that capitalism was not a pathway toward future opportunity but a centrifugal and chaotic uncertainty. END_OF_DOCUMENT_TOKEN_TO_BE_REPLACED 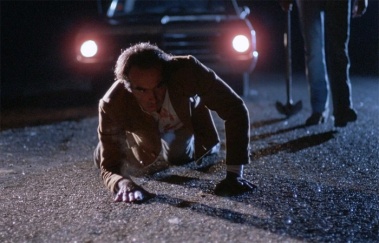 Until 2007 when they unchained No Country for Old Men on unwitting audiences, Blood Simple was the black sheep of the Coen Brothers family. Their second feature Raising Arizona is, on the surface, its diametric opposite, a harried, maniacal fracas of disheveled lunacy and Southwestern loneliness. That latter film has, more or less, paved the way for many of the Coen Brothers’ more famous features, inaugurating their reputation as the pied pipers of modern artful screwball. But Arizona shares two central components with its predecessor despite Blood Simple’s reputation as the wild card in their canon. Tones aside, both films are mordant, fiendishly cunning grasps of dour, melancholic tragedy, both comedies-of-loneliness. And both are acid-washed images of people in need of an escape hatch. The sheer surfeit of mood aside, Blood Simple frequently feels like a premonition of the Coen Brothers’ entire career. Considering Blood Simple reveals the crestfallen image of a destitute US and stunted, criminally miscommunicating people that skulks, almost subterraneanly, within the notionally-chipper heart of many of their later films. END_OF_DOCUMENT_TOKEN_TO_BE_REPLACED

I’ve been away for so long … Here’s a holiday classic to re-inaugurate the site.

Fifty two years later, Bill Melendez’s first television special adaptation of Charles Schultz’ Peanuts comic strip remains not only the most unshakably apprehensive, despondent animation in the entire series but the most unmediated, direct transmission from Schultz’ famously depressing comics so palpably informed by middle-age anti-nostalgia. Critics are extremely fond of slippery-slopes about “adult” Christmas cinema. They turn every minute flicker of violence or filigree of naughty language into a claim that their favored Christmas adaptation is the one that truly harbors darker thoughts about the holiday spirit lurking around the corners of its thought. They defend everything form Die Hard to Gremlins to Lethal Weapon – seemingly every circumstantially-Christmas-set film released in the ‘80s – as emblematic of a more perverse Christmas sensibility of merry travesty. This curdled, nasty sentiment that uses Christmas as a victim to beat with its own candy canes has since blossomed further into a typically cringe-inducing glut known as Christmas horror cinema and more overtly bad-tempered lumps of coal like Bad Santa. END_OF_DOCUMENT_TOKEN_TO_BE_REPLACED

Y Tu Mama Tambien is inauspicious, but like many great films, it reaches for and touches the world and humanity in everyday actions and seemingly small gestures. Here, for instance, we have teen sexuality, laid out with all its romanticism and reality, filled with the kinds of empty-but-meaningful gestures that define humanity’s desires and their foibles. Director Alfonso Cuaron is a highly personal director, but he’s always most interested in defining his characters in relation to the world they inhabit. His two protagonists here are immature and petty yet deeply human, reflections of a society that won’t admit it has given birth to them and which they, initially, want no part in. He gives us a profoundly human story, built on the eternal humanness of sex as a marker of adulthood and childishness, and given life by Cuaron’s wonderfully and contrapuntally painterly version of sloppy, slovenly reality. END_OF_DOCUMENT_TOKEN_TO_BE_REPLACED

An astonishingly hopeless anti-myth odorized with the stench of failure and bloodstained with the tattered remains of hope, They Shoot Horses, Don’t They? twists the idiom of dance away from its usual home in restless fantasy, treating human gyrations as the small-scale reverberations of a slowly-tilting edifice ready to crumble to the ground. For Sydney Pollock’s film, dance movements are first particles of movement that exist not to fling us into a hopeful future but to topple us from below, subsuming us to the movement of our feet that seem no longer tied to our minds or our personal agencies. Our bodies are no longer uncertain adventurers carving out a bold future but frantic chasers of a dream deferred, hoping to catch up to the scraps of nothingness thrown our way. They Shoot Horses is a parable of America as a collection of lost souls wandering into dancehall marathons – brandishing hopes and dreams of Grace Kelly and Fred Astaire, or the Charleston – and succumbing to the barren, unforgiving economic destitution that undergird and consume the romantic aspirations that nominally lacquer the surface of these activities. As Pollock sees it, bone-dragging, fall-out-of-bed-and-stumble-upwards days are the only ones America had in the ‘30s, and maybe ever again. END_OF_DOCUMENT_TOKEN_TO_BE_REPLACED

The wide-ranging berth of writer-director Jia Zhangeke’s multipartite, all-across-China film, A Touch of Sin, cannot deny its impeccable eye for the specificity and complication of even the least of its individual tales. A Touch of Sin is obviously the story of a society; its nature is polyphonic, paralleling four individual tales and hinting at many others, asking us to look at a wider portrait of the world, even one in which many souls feel atomized and alienated. But, despite the length and size of this film, it never feels like a belabored or overly-grandiose obelisk, a sky-high statement that attempts to encompass all of China. Its rhythms are minute and intimate, its portrait of modern-day China finding its genesis not in any declamatory, macro-level statements but in the tight minutiae of four tales playing out on canvases of inward regret, internal dissolution, and people yearning for other selves. END_OF_DOCUMENT_TOKEN_TO_BE_REPLACED

It would be astonishingly difficult to convince a viewer to watch director Christi Puiu’s The Death of Mr. Lazarescu if they weren’t already predisposed to adore Puiu’s strange, sardonic, drunken but deeply compassionate 150-minute account of exactly what its title suggests. The plain-spoken brutality of the film’s title is not an ironic or even a metaphysical signpost for the symbolic scholar. It is not simply an imaginative foothold for the audience to understand that the film is really using its narrative to plumb some epochal commentary on life in modern-day Romania, to expose a “death” that is abstract or societal in nature, as though the world’s compassion is withering away. The title is not merely an intimation or a whispered poeticism, a literary flick of the pen meant to draw us into the film’s thematic caverns. END_OF_DOCUMENT_TOKEN_TO_BE_REPLACED