After his passion play exploded and perfected itself circa 1989 with the sublime muck-raking journalism of Do the Right Thing, Spike Lee’s inimitable style, while typically expressive, developed a tendency to crash into the realms of the expressly overwrought and the tangled, even by the standards of a polemicist. Qualms aside though, his films seldom dipped below the realm of inspiration, but that didn’t keep Lee from grasping for mainstream success. Pigeon-holed even though he didn’t deserve to be – his ‘90s output is a rainbow, a prism, of different, improbably variegated points of tonal and conceptual ingress to the subject of race – the ‘00s saw him on a vision quest for public acceptance, which unfortunately meant curtailing his polemical tendencies, excising race, or at least reducing it to the ghetto of the subliminal or implicit realm. The fruits of this shift were among his sharpest works – 25th Hour, Inside Man – but also among his more manicured and thus easily digestible, perhaps too judicious in their careful, almost ginger treatment of themes when Lee’s natural inclinations are for the dangerous. END_OF_DOCUMENT_TOKEN_TO_BE_REPLACED

Thirteen years after its release, one doesn’t have to look far to harness the consternation beating within Ang Lee’s tortured inferno of a motion picture. A poetic, lyrical, even hushed Shakespearean tragedy about generational sin and the disjuncture of personal selves, the film had the distinct whiff of a confidence trick when it was released in 2003 to superhero-hungry audiences. Rather than quenching adolescents’ Pavlovian bloodlust for improbable brutality, Lee’s film whispered sweet nothings of brash, brazen, smash-em-up violence in our ears and swindled us, harnessing that madman superhero energy and the cushy budget into a thoughtful, vital study on personal identity that mirrors, more or less, Lee’s own misfit status as a sensory-minded, sensitive art-cinema poet donning mainstream, blockbuster airs. END_OF_DOCUMENT_TOKEN_TO_BE_REPLACED

Call it whatever you’d like, but this all-black modernization and loosening-up of The Wizard of Oz sure ain’t business as usual. Following the script but rereading the lines, altering the inflections, and considerably jazzing up the razzamatazz, the all-black The Wiz is ironically a loaf of white bread behind the screen (black stars became popular during this time, but black directors and writers, and thus control of movie sets and structure, and potentially control of white underlings, was still verboten by the Hollywood elite). Headed up by the hippest cat in town, Sidney Lumet, fresh off of simmering New York to a boil in Dog Day Afternoon and blowing his top in Network, this film is Lumet’s first old-fashioned NYC acid-trip. END_OF_DOCUMENT_TOKEN_TO_BE_REPLACED

Francis Ford Coppola’s great folly One from the Heart splintered the American New Wave/New Hollywood into shards of half-remembered former glory, casting the great American directors of the ‘70s across the land and possibly abetting the groundwork for the most corporate decade of all American cinema next to come. The famously impossible shoot of Apocalypse Now nearly killed him, of course, and for his next film, he wanted to gift himself a present, much as Michael Cimino did when his The Deer Hunter garnered award after award and he granted himself passage to direct his own pocket passion project Heaven’s Gate. Now, the New Hollywood barely survived Heaven’s Gate, the baroque masterpiece masquerading as a misfire, a grand accident of a film about the grand accident of America. But One from the Heart? The already rickety New Hollywood, a house on stilts with the whirlwind of Star Wars and other new-fangled pop cinema just waiting to topple it, couldn’t survive another go around. END_OF_DOCUMENT_TOKEN_TO_BE_REPLACED 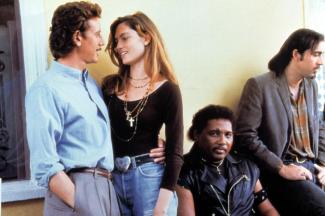 If only Nicolas Cage could find a home. Werner Herzog was one once (in a much more harrowing caricature of New Orleans than Zandalee). Charlie Kaufman was another. Cage’s uncle Francis (yes Coppola) could have been one had Coppola still been granted passage to his inner delirium by the time nephew Cage was already acting. As a baroque, unhinged stylist, Cage is the ideal interpreter for a subset of directors who can channel him – or unleash him with a purpose – but too often, he’s left wandering the land, ambling around like a grotesque freakshow disfigured of rhyme or reason, and not in a good way. Despite what you might think, the problem isn’t new either; it’s an age old conundrum, one that Cage has less solved than exacerbated, but rare glimmers of beauty always secrete out of his frothing mouth when it’s in full-on walking abomination mode.   END_OF_DOCUMENT_TOKEN_TO_BE_REPLACED

Years later, even if it isn’t always effective filmmaking, it is plainly apparent that Don Bluth’s second film with Fox Animation was never given its due process. Hired to best Disney at their own game with 1997’s Anastasia, Bluth had a one-film hot streak under his belt when he fearlessly jumped into the animation deep end with its follow-up, 2000’s Titan AE. His arrival at that point, the world now on his shoulders, was a two-decade-long torrid affair with the powers that be. After originally rising through Disney’s ranks in the ‘70s, when the company was in a downhill slide, he absconded in the ‘80s in belief that he could outdo them. His dream of besting his once-master was briefly given feral life, but Disney’s ‘90s renaissance was too much for him to handle, ultimately resulting in screwing himself over in the early ‘90s in a desperate craze to keep up with his former masters resulting in failure after failure. His career was over, until Fox Animation ceremoniously afforded him one more shot to best his former bosses (admittedly, he was the only one in history that had accomplished this goal before, so one can see why he was the natural candidate). Anastasia triumphed commercially just as Disney was beginning to falter itself, and the stage was set for Bluth to return to investigating the crevices of animation rather than simply aping his former masters as he did with Anastasia. END_OF_DOCUMENT_TOKEN_TO_BE_REPLACED 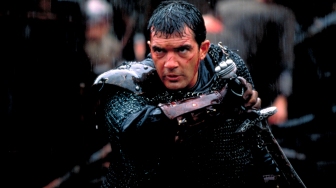 With all the slashing and piercing found within, it isn’t really a surprise that John McTiernan’s disastrously over-budget The 13th Warrior is so disemboweled. This tonally promiscuous production vacillates between effectively brazen horror viciousness and petty, watery cartoon-viking bombast, the two tones functioning like combative enemies rather than fascinatingly differentiated tonal inversions. Devious wrongdoings behind the camera and disastrous reshoots ensure a production that runs the gamut from pastoral myth to Manowar album cover, a grungy, dirge-like epic of alternately jaundiced and flowery discombobulation.

The reason’s for the film’s failures aren’t intangible either; with John McTiernan’s down-and-dirty update of Michael Crichton’s ‘70s book Eaters of the Dead subject to disastrous test screenings, the production company basically hired Crichton – an experienced but negligible director of his own source material – to re-film scenes, drastically altering the film’s tone and warping an exploitation-style thriller into a pseudo-epic monster mash. Delaying the release a year in the process, the reshoots also doubled the film’s budget to a massively overinflated 160 million (at the time, third only to the phallic Titanic and the misbegotten Waterworld for cost, and unlike in those productions, very little of it is showcased on the screen here). END_OF_DOCUMENT_TOKEN_TO_BE_REPLACED

An elephantiasis-afflicted, dismal anti-epic of undying malfeasance, Kevin Costner’s The Postman is positively drunk on its own grotesque patriotism and egotistical self-interest. From the man who directed Dances with Wolves and starred in (and may have directed) Waterworld, The Postman is just plain engorged, a foolishly endearing attempt to flare-up every operatic cue and hyperbolic shot in those films, fling well past the point of common logic, and invade the realm of Rococo drama. Fittingly, it is a missed target of a distinctly and unambiguously Costner-esque caliber. While Dances was a questionable but undeniably poetic epic that suggested something of America’s own mythic grandeur, The Postman finds the bottom falling out as Western pastiche becomes accidental Western parody.   END_OF_DOCUMENT_TOKEN_TO_BE_REPLACED 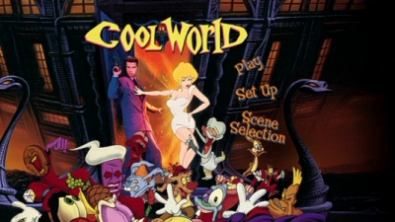 The early ’90s was a phoenix-like ascent for animation, a time to rise from the grave of the ‘70s and ‘80s and flaunt the medium’s wares anew. Taking little time to clear its throat, a renewed Disney Animation huffed and puffed The Little Mermaid, Beauty and the Beast, Aladdin, and the epochal The Lion King out into the world in a manner of years. In doing so, they blew down the house of their reputation as a failed, past-its-prime studio of has-beens. Meanwhile, Don Bluth, the rising star of the studio and its potential savior throughout the ‘70s, had jumped ship – firmly believing his clout was wasted on the irrelevant Disney old fogeys of the ‘70s  – and by the late ‘80s, his own star was shining with works like An American Tale and The Land Before Time. Although both pillars of animation would struggle before the decade was out (Bluth faltering almost immediately upon the turn of the ‘90s), the landscape was hot for the moment, so hot that even animation’s famous bad boy (long dormant and lost in the fray) couldn’t miss out. END_OF_DOCUMENT_TOKEN_TO_BE_REPLACED

Monkeybone represents director Henry Selick’s well-meaning attempt to disrupt the live-action realm with the furious might of his expressive, cocaine-addled stop-motion cinema. While his previous efforts behind the camera were all compromised in one way or another (often to their benefit), this deeply uncentered film is the most immediately adept at cracking into his singular mind. While The Nightmare Before Christmas was an acolyte of Tim Burton and James and the Giant Peach indebted primarily to the Roald Dahl tradition, Monkeybone feels like Selick in his purest form, Selick unhinged. And also, perhaps necessarily, Selick on a reckless rampage that leaves him both struggling to handle the reins and at times completely distracted from the havoc his feral beast has wrought. END_OF_DOCUMENT_TOKEN_TO_BE_REPLACED