The mental cracks of an unstable mind loom large over Michelangelo Antonioni’s first color film. But although main character Giuliana (Monica Vitti) is parallel to the film, it isn’t her student. Red Desert is too unresolved, too contingent, too woolly to reduce to a purely psychological reading rooted in Western cinematic bylaws where expression is distinctly and unambiguously a refraction of the protagonist’s mental geometry. The common reading that Giuliana is “mentally ill” mistakenly clarifies and pacifies an instability that the film intentionally, beautifully, cannot quantify. The mistaken assumption unduly emphasizes the individual, the protagonist, as a “special” or “unique” case-study that is different from, or tangent to, the world around her. END_OF_DOCUMENT_TOKEN_TO_BE_REPLACED

Four-for-four and every-mutable, Laika will never master the box office (good thing they have a trust fund kid at their helm), but they’re the first serious challenge to Pixar’s recently abandoned throne in the Western animation market. Having wrung their kiddie-Halloween aesthetic dry over three films varying from exceptional (Coraline) to inspired but simplistic (The Boxtrolls, prompting claims that they were running out of steam), Kubo and the Two Strings is the offspring of a seemingly dramatic sea change in the company. At some level the most self-consciously mature of their offerings thus far, Kubo is also undoubtedly the company’s most luminescent at the formal level. There are strains; the tepid narrative literalism of most animated features is present and, if anything, only exacerbated by the fidelity evident in the rest of the film. But even if Kubo was merely ancillary to the realization that Laika still has gas left in them, the flaws would be forgivable at worst and downright invisible at best. Oh yeah, and the film is also frequently stupendous, so there’s that box to tick too. END_OF_DOCUMENT_TOKEN_TO_BE_REPLACED

In the annals of screwball comedy, no film more baldly trumpets its sense of collective character perplexity as much as Howard Hawks’ Bringing Up Baby, a screw-loose comedy of emasculation, inebriation, and performative recalibration that upends the collective narcosis of the everyday world. As with many screwballs, the eyes of the world within the film unmistakably do not understand the two main characters, much as audiences at the time didn’t quite understand the film. The inescapable mania of the picture can cause even the peppiest viewer to catalyze an embolism. Or run away in fear. Whichever comes first.

Misunderstood upon its release, Bringing Up Baby, now enshrined as a beloved classic, isn’t going anywhere eighty years on. Pitting the neutered, stuffy welterweight scientist David Huxley (Cary Grant) with (against) the unflappably improbable Susan Vance (Katherine Hepburn), Hawks’ film was too difficult, almost non-narrative in its flurry of bedlam, to be quite ready for prime-time when it was released. The most Marxian of the screwballs (you can read class into it, but I of course refer to the gleeful anarchic anti-reality impulse of the Marx Bros.), the world of Bringing Up Baby is dangerously off-its-hinges and incontestably ready to topple over and damage society while going about its business. And you wonder why it struggled to find an audience. END_OF_DOCUMENT_TOKEN_TO_BE_REPLACED

Largely, the story of The Circus is, much like the circus itself, the tale of performative wonder forever mired by dogged claims of benighted emptiness. Much like a circus, The Circus is whispered about with the hushed tones of an empty-calorie exercise in endlessly travelling around, living a harried, itinerant life as a collection of sketches rather than the presumably more “developed” and forward-thinking narratives of Chaplin’s silent films on either side of this feature (the monumental The Gold Rush and City Lights). You could call it a trivializing escapade into fluff rather than an expedition into psychology or social realism, but you’d be denying the film, and yourself, in doing so. Singularly among Chaplin’s feature-length films, The Circus is a regression to his earlier days alighting one and two-reeler pantomimes, and it is not in spite of this fact but because of it that the film flies as highly as it does. END_OF_DOCUMENT_TOKEN_TO_BE_REPLACED

It is ever easy to infringe on Michelangelo Antonioni’s reputation with the benighted “pretentious” signifier, avoiding and flattening the mysteries of his oeuvre in the process. The real work, and the effort Antonioni deserves, arrives when one actually looks into the film, engages with the materiality of its existence, and discovers that the act of watching this unquantifiable, unstable film is itself a reflection of the film’s gaze onto the tentative spaces of the world. Antonioni’s cinema isn’t a fixed state, but a thought-process, or a process of gazing and puzzling out a world that is not prefigured or assumed but a project ever in a state of transition. The concept of “the gaze” was waiting in the wings, soon to be all the rage, at around the time of L’Eclisse’s release, but few films transcend the subjective gaze of the character to a higher state of awareness of the subjective gaze of the film quite like Antonioni’s. L’Eclisse doesn’t confound expectation to trick us with a twist but to trap us in a state of affairs where the world must be interrogated. And in trapping us within the world and not allowing us to gallantly stride across it (as most movie characters do), Antonioni’s films are, paradoxically, primarily liberating experiences, works that unshackle us from narrative as well as easy expectations of what the world ought to be. END_OF_DOCUMENT_TOKEN_TO_BE_REPLACED 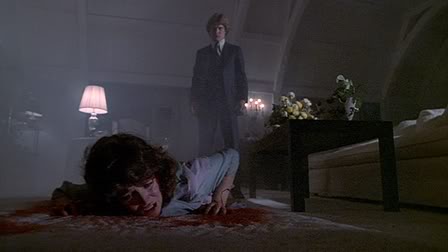 A barn-burning blockbuster mixed with a post-psychedelic phase-out, The Fury was released (or unleashed) at a point in time when freakishness was something to contain and compartmentalize rather than flamboyantly unhinge. Yet director Brian De Palma, his corporate cred already in good hand after kick-starting the wave of Stephen King adaptations with Carrie, lets the crazy all hang out. An evolution and perversion of Carrie, The Fury won’t be to everyone’s tastes, although it certainly was to critic Pauline Kael’s. In one of her most infamous typeset orgasms, the famous moralist critic let loose, felt the film’s pulse, and ran with it.
END_OF_DOCUMENT_TOKEN_TO_BE_REPLACED 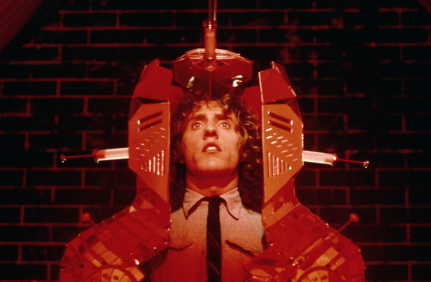 With Tommy, certified mad scientist Ken Russell retools that Old English warhorse of an album from the Who into a whirling dervish of flamboyant disco-fever proto-prog nonsense. Initially kindling the memory of Richard Lester’s A Hard Day’s Night, Russell’s film derails whatever facsimile of sense or grubby intimacy remained in the semi-verite aesthetic found in that exultant spasm of a 1964 masterpiece. Which is fitting; the Who’s Tommy, the 1969 album, was essentially the turning point where British rock music mutated (sometimes to its detriment) from a cabal of psychedelically-charged, lacerating nuggets (more like aural secrets than full-throated arias) into bombastic, headlong plunges into super-textured, baroque madness, the bastard child of which became progressive rock. With the film  A Hard Day’s Night, rock ‘n’ roll cinema was cheeky, provocative, untroubled, gallantly foolhardy, a burst of energy. By the film Tommy , rock ‘n’ roll cinema could be sinister and campy but was always distinctly troubled, a dialectic of cynicism and silliness coiled up in confusion, the once-burst now a full-on fever for good and ill. The decade in between the films speaks not only to shifts in musical impulses but a decade-long cultural-temperature slide from a birth wail to a death rattle. And when the coloration is this clamorous, it’s got shake and roll covered as well. END_OF_DOCUMENT_TOKEN_TO_BE_REPLACED

Midway through Sausage Party, the film’s lone stylistic experiment clarifies the purpose of the foul, if perceptive, demon that writers Seth Rogen and Evan Goldberg have wrought. The animators call on the memory of the charitably sketch-like 2D animation style practiced by rabble-rousers like Ralph Bakshi to insinuate the chaos of an earlier animation world (the ’70s and ’80s) where Disney was dead, Pixar never existed, and animation was an honest-to-god experimental underworld cast adrift without a purpose except to mess up the joint. With the end of the ‘80s, Disney resurfaced as a guiding light from the heavens, and Pixar followed soon in their wake, two entities (well, Pixar especially) that more or less retooled adult-themed animation as a sacrificial lamb in the West (in comparison to Japan, for instance). Animation now exonerated of its crimes of being dangerous, the world was a better place once again. END_OF_DOCUMENT_TOKEN_TO_BE_REPLACED