It’s the most depressing kind of thing to discover a film that is popular only for its theme tune, only to watch it and realize that the theme works primarily because of the film it accompanies, and that it is the images and sounds of that film in unison that dance together a most magic dance. Wait, did I say “depressing”? I meant absolutely positively exciting and inspiring in the most enchanting possible way, although it is also depressing in the sense that I am confronted with the fact that we remember Queen songs these days more than we remember totally singular, inspired filmmaking. For, terrible as it is in many ways, there are aspects of Flash Gordon that are inspired in a way I cannot even begin to describe. END_OF_DOCUMENT_TOKEN_TO_BE_REPLACED 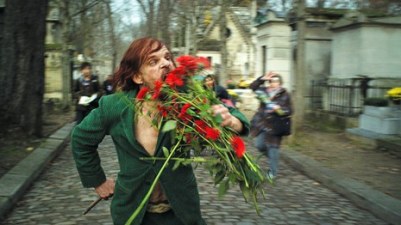 Leos Carax took 15 years to make his next film, but he fashioned one of the decade’s most alert contributions to the history of cinema in the process, fundamentally tackling the idea of fiction entertainment and providing the most damaging, cantankerous commentary on the perils of acting and voyeurism you’re likely to find this side of the 21st century.

This inscrutable, willfully difficult monstrosity begins with an old man (Denis Lavant) waking up in his archly stuffy, bourgeois home to ride a limo to work. Well, presumably to work. Well, it is to work, but that’s besides the point. His driver (Edith Scob) informs him he has nine appointments for the day, and with tepidness he skulks right in. Then he scrapes on some makeup with precision and vigor, pulls off his hair, and the fun begins. His first stop involves a motion capture hootenanny, Lavant dressed to the nines in lightbulb sensors and a fellow, female, participant doing a dance with him that alloys the sensual and the robotic. From there he’s a monster, decked out like the Lucky Charms guy gone bad and cheekily beckoned forth by Akira Ikafube’s original Godzilla theme. END_OF_DOCUMENT_TOKEN_TO_BE_REPLACED

If Ratatouille suffers in any meaningful way, it is simply because it does not redefine the possibilities of cinema like its immediate successor Wall-E, a contender for film of its decade and one of the two greatest American animated films since the original Disney Golden Age (yes, the original Golden Age, the one that ended in roughly 1942 and saw Disney fundamentally reorganize the state of film no less than four times).  That aside, it is an impeccable work, and although I suspect the if is more definitive, that is damning as enormous, transcendental praise.

Brad Bird came to Ratatouille with two films under his belt, the incomparably underrated tribute to ’50s genre cinema The Iron Giant and the morally questionable but zippy and whiplash recreation of American comic book history The Incredibles (if I felt Bird was some sort of radical, subversive genius, I might claim this film a mockery of the rampant elitism and individualist bootstraps twaddle inherent in Superhero lore; they don’t call it America’s Modern Mythos for no reason). Yet, while Brad is not looking to stoke the flames of film technique to redraw the lines of the form, or to indict that which he invests time in to with the fury of a New Wave auteur, what he is absolutely interested in, capable of, and brilliant at, is having fun with classical cinema given to new airs. With Ratatouille, he channels his talents into classical Hollywood fluff and has a grin on his face so big it’s ready to jump of and kiss the audience while he’s doing it. END_OF_DOCUMENT_TOKEN_TO_BE_REPLACED

It is not a new claim to compare Polish director Pawel Pawlikowski’s Ida to the works of Ingmar Bergman. The inner psychosis, washed out black-and-white cinematography, quiet, haunted feel of the air around the film, and the contemplative characters are all Bergman down pat. Even better, the film’s clinical, dry exterior, carefully modulated framing, and highly static camera meant to box off characters at a distance for observation are all patented art-house techniques used piercingly well in Ida.

The shot selection is textured, operating form a well thought-out place of “show, not tell” and “show only what is necessary”. The cinematography is frequently gorgeous in a non-insistent,  chilly sort of way that just sneaks up on you and envelops the story, as opposed to insisting on the visuals for their own sake as many art films do. It’s a calm film that hides deep internal dissonance and fractured soul, and that is what just about any Bergman film was in its refutation of narrative cinema for elliptical beauty. The sense that we never quite know what perspective the camera takes is very much present here. When it comes to pure craftsmanship, it’s a hard film to knock down. END_OF_DOCUMENT_TOKEN_TO_BE_REPLACED

In a nearly dialogue-free sequence blanketed together by long-shots that cut only when absolutely necessary, capturing feeling and physical space with stunning, sparing clarity, we learn just about everything we could possibly need to know about the state of Wall-E‘s world with an awe-inducing elegance that casts its gaze on inspired little moments of action and (mostly) inaction. We are also treated to the finest cinematic homage to bright, feeling, humanist silent cinema snark this side of …well, the heyday of silent cinema.  While Pixar’s follow-up film, Up, pulled out all the stops for a life (or two) in a minute, Wall-E is wonderfully content to just chill and explore its world a little in the most wonderfully non-narrative fashion, invested less in “arc” than in the little visual moments that define character. The opening scenes of the film are, quite literally, just a slice-of-life drama, except there’s nothing alive to be found. There’s just a robot, and his name is Wall-E.

END_OF_DOCUMENT_TOKEN_TO_BE_REPLACED

It’s an easy thing to see the success of Coraline the film resting squarely on Neil Gaiman’s shoulders. Indeed, his sly storybook writing is the base of the film’s narrative, which sees young Coraline (Dakota Fanning) stuck in the day-to-day doldrums of a dreary, lifeless existence in suburbia. Every detail of narrative is very much Gaiman-esque (which, if not yet coined, most certainly will be soon enough). One day, Coraline finds a portal to another world, alike in some ways but different in many others, as though it was built by the same architect in an altered state. There she meets her “other” parents, alike in every physical detail except one: black buttons sewn in where eyes once were. Emotionally and mentally, however, the new parents are polar opposites. While her old ones are overworked and uninterested, her new mother and father spend every waking moment perfecting Coraline’s world. It’s a dream come true, but young Coraline is about to discover that behind every dream lies a nightmare waiting to burst out. END_OF_DOCUMENT_TOKEN_TO_BE_REPLACED

When today’s youth approaches the world of Japanese filmmaking, the most ubiquitous name is not Kurosawa, nor Ozu, nor Mizoguchi, but Miyazaki, the marvelous maestro guiding his Stuido Ghibli toward the clouds lifting up human imagination, and particularly childhood emotion, rendered sublime. It’s perhaps fitting that Miyazaki has taken up the mantel, for he combines the best of the past into a whole equal parts grandiose and sweeping (Kurosawa), spiritually elegiac (Ozu), and mournfully mythic (Mizoguchi).  It seems inappropriate to discuss Japanese cinema without him, and it seemed inappropriate to not take the opportunity to review his two most achingly personal, most emotionally pure movies. That the two were released simultaneously in a theatrical double-bill, and that they are linked by so many diegetic features only to be as tonally opposite as any two films ever were, is an all the more fascinating testament to Miyazaki’s exploration of humanity at its most unrestrained and least affected.

My Neighbor Totoro is at its best when it is at its simplest, which thankfully is every single frame of every single scene in the whole film. It is a deeply streamlined work, lacking superfluous event to the point where it is almost non-narrative in its impression of childhood amazement. The narrative mostly boils down to eight year old Satsuki (Hidaka Noriko) and her, for lack of a better term, adventures in the forest next to her new rural home. END_OF_DOCUMENT_TOKEN_TO_BE_REPLACED