It must be said: excepting The Matrix, no single film has done more harm to the modern cinema industry than Pulp Fiction. The old “every filmmaker who saw it made their own movie” card is the great equalizer, uniting genuine talents and hacks alike. But in the case of Tarantino, the results were far from equal. A few genuine craftspeople followed in his wake, but they were diamonds in the rough compared to the far more significant cohort of filmmakers who whipped Tarantino into a frat boy’s wet dream and perverted his vision of cinema from the ground up. Largely, this has to do with Tarantino’s supposed “cool factor”, the superficial blanket hanging over all his films that has beckoned first-timers the world over to ape his penchant for slick, sick violence, whirlwind camera jerks, and self-consciously fantastical style. This style has always been a noose around Tarantino’s neck, and it has strangled the world of cinema for years to come. END_OF_DOCUMENT_TOKEN_TO_BE_REPLACED

There are precious few films about childhood. Many aim for an audience of children, but most look down upon them in their assumption that they will eat up any and all immature entertainment simply because it is handed to them. It is the rare film that tries to peel back the layers behind childhood and to give us a look at what growing up entails. Because it is difficult to focus on children in film without rendering them types, either immature simpletons who do not understand the world or wise-beyond-their-years precocious types who “know” better than the adults around them, it is rarer that a film succeeds at presenting childhood with a quiet sigh, knowing a certain maturity without ever losing itself in the adult desire to judge and moralize to children. There have been a number of great films about childhood, but none stand taller than Francois Truffaut’s debut film, the work that kicked off perhaps the most important movement in film history, the French New Wave: The 400 Blows. END_OF_DOCUMENT_TOKEN_TO_BE_REPLACED 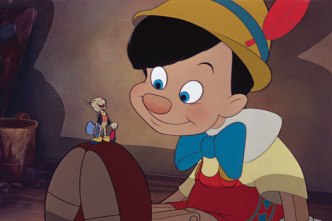 In honor of their seventy-fifth anniversary in 2015, I present a pair of reviews for my two favorite Disney animated releases, both released in the same year, 1940, and both far more challenging and transformative than any feature film the company has yet released since. The two introductory paragraphs of the reviews are identical or nearly identical, but the meat of the reviews are film-specific.

Fresh off of reinventing cinema with the 1937 release of Snow White and the Seven Dwarves, Walt Disney and his band of merry auteurs certainly made enough money to rest on their laurels and produce what would have assuredly been a hugely successful similar film. Another princess, another band of silly sidekicks, another all-time expressionist cinematic villain, you get the deal. Things would have gone down smoothly, and Disney and friends would have been laughing all the way to the bank. Except for one thing: for all his grubby corporatism and power-hungry megalomania, Walt Disney genuinely loved film, and he genuinely loved testing the waters for what film was capable of, and no one, not even the corporate masters he answered to, was going to tell him otherwise. He was a man of boundless vision, a child in a cinematic toybox, a person driven by ego and pulsing personal joys and for whom his company was a means to immortalize his dreams and nightmares on celluloid for everyone in the world to see. He made films because he wanted to watch them, and after Snow White, he didn’t want to watch another princess story. He was hungry, and having changed things forever, he wanted to do it yet again.
END_OF_DOCUMENT_TOKEN_TO_BE_REPLACED

A man is tempted by an insidious, curvaceous force that feigns the feminine form and he slowly finds himself wound up like a ball of yarn for the cats’ night out. That’s how Vertigo begins, but only in the most superficial sense how it dissolves. It stars James Stewart as Scottie Ferguson, a private eye hired by a friend to spy on the friend’s wife Madeline (Kim Novak), whom the man believes is possessed by a familial specter who has long overstayed her tenancy in the human body. Soon enough, Scottie finds himself in love, and perhaps so too does Madeline. Things truck along in ghostly romantic chiller fashion from this point on, but director Alfred Hitchcock couldn’t resist slopping some blood on the tracks.

In 1958, Hitch was on top of the world, but he was about to blow the roof out. Over the next three years, he would release perhaps his tripartite masterpiece, spinning wildly from the psychoanalytic modernism of Vertigo to the boisterous, brash thrills-a-minute of North by Northwest, and sticking the landing with the black-hearted chiller Psycho, which would forever redefine horror filmmaking. All apologies to his latter two efforts, Vertigo is his time-capsule piece, and arguably the most singular and unclassifiable American film of released post-Welles. The reason for the film’s success is simple: it is quite clearly Hitchcock having the most fun he ever did behind a camera, cackling some of his most dementedly grotesque chuckles in the process. It’s a maddening, cataclysmic, ungodly little curio that plays a downright mean trick on the audience, and goes home laughing all the way. END_OF_DOCUMENT_TOKEN_TO_BE_REPLACED

Watching again four holiday-seasons later, Some Like it Hot is such a prickly affair, so spirited and yet so suspicious of society, so generous and joyous and yet so acrid and jarring, so innocent and compassionate and yet loaded so deviously with subterfuge. And, in some ways, so much less and more transgressive than some critics make it out to be, with so much less to say about gender in the traditional sense – it doesn’t really dispell any stereotypes or even advocate for fluidity per-se – and yet so much more to say about the intersection between social identity and achievement, and the intersection of desire, gender, and capital, more broadly, insofar as the two protagonists perform alternative genders to fill a role in society when their existing roles are questioned or eliminated.

But Some Like it Hot confounds expectations at every turn. It’s practically baked into the film’s structure, beginning with a gorgeous prologue which rather seditiously feigns full-on gangster drama, and even though the protagonists escape that genre, the film never gets out of dodge: its always nervous, always serious, and never dethrones its characters or their anxieties for the sake of a joke. The famous final line, so hilarious in the moment, intimates a full history of tragedy and dashed expectations. Other scenes presage the vicious ecstasy of Wilder’s later One, Two, Three, but this film stages a truly mordant drama that always makes its empathy legible, frustrating any desire to mock the males’ foolishness for wanting to dress up or believing they can easily pass off as women without any understanding of the social codes of gender which until that point in their lives had been essentially preordained or written-off as “natural”.

Worthy of absurdity though their fumbling attempts to realize the performative nature of gender may be, the film never sabotages or demeans their inexpressible desires which are veiled in rhetoric and miscommunicated encounters. Instead, it frustrates their ability to express them clearly and cleanly. Thriving in the pragmatic space between internal dreams and external manifestations of those dreams, Some Like it Hot explores both the tragic and absurdist dimension of the fact that we must mediate desires through social roles which cannot fully explain or express those desires.

No one did Old Hollywood like Billy Wilder. And by did, I mean toyed with. He made Old Hollywood film stylings his pet. And if Billy Wilder was your owner, you were liable to succumb quite quickly to his oppressive, cynical charm. You’d grow up an ass, but you’d have a lot of fun in the meantime. He perfected perhaps the most Old Hollywood genre of all, film noir, in 1944 with his nihilist fable Double Indemnity, sent Old Hollywood off in fine style with his late period The Apartment, and generally dived deep into Old Hollywood and ripped it into little pieces from the inside out with his masterpiece among masterpieces, Sunset Blvd. But America never loved a Billy Wilder film like Some Like it Hot, and it’s easy to see why. Never before, and probably never since, has a comedy been so carefully assembled to walk a thin line between sauce and sweetness, between bouncy, lascivious swagger and prim-and-proper airs. And perhaps never before was Wilder so gosh-darned fun. END_OF_DOCUMENT_TOKEN_TO_BE_REPLACED

Edited and updated in mid 2015

Sunrise was one of “those” films. By those, I mean the films which changed cinema, which defined “before” and “after”. While the case is often made for Citizen Kane as the singular production which advanced what film could do the furthest for its time period, Sunrise is perhaps the only film to seriously challenge that claim. F. W. Murnau, the expressionist master behind classics such as Nosferatu, brought his talents to America here, and to tragic romance. In doing so he not only created an ethereal, transcendently romantic vision of the world, but he transformed what film meant for that world.

The narrative of Sunrise is simplicity itself. It’s a story of love and temptation, intentionally rendered universal through characters whose names are literally types. They are “The Man”, “The Wife”, and “The Woman from the City”. The first and the second are married, while the first and the last are having an affair. These two plot to end the marriage and run off together, having “The Man” take “The Wife” to the city on a vacation from their country abode and drown her there. When the time comes he finds he cannot continue with the plan; the trip to the magical chaos and clutter of the city only rekindles their love. Assumed tragedy later strikes and causes “The Man” to grow angry and even potentially murderous, but love looms large in Murnau’s vision and he isn’t about to give up his puppy-dog mythos of the world without a fight. END_OF_DOCUMENT_TOKEN_TO_BE_REPLACED