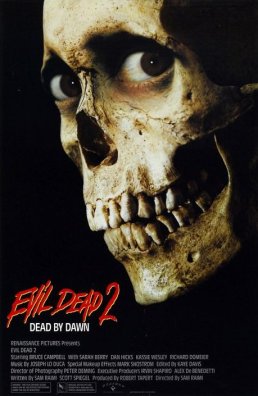 Sometimes it’s the simple things that pay off most readily, you know? A few non-actors. A cabin Woods. Two dozen buckets of cinematic fury and might. A story that can be summed up as “those non-actors in that cabin face off against those two dozen buckets of cinematic fury and might and have their asses handed to them”. Thus is Sam Raimi’s Evil Dead II, such a simple and elegant horror film it doesn’t need to explicate a damn thing. There’s a book. It unlocks some demons. And it’s in a cabin. Why does the book do this, and what are its limits? Who cares. All that matters is that it is the most direct and unworried clothesline upon which Sam Raimi can absolutely tear not one but two genres a new one, and tear down the whole idea of genre as a construct in doing so.

It isn’t really saying much, considering its competition and the positively dreary state of American film during that particular decade, but Evil Dead II might be the battiest, most zestily-directed American film of its decade. Now I recognize this as hyperbole, but Raimi invites hyperbole, and the film earns it. Goodness gracious, the camerawork alone does whirlwinds around anything else being released around the same time, damn near earning the title all its own. Raimi’s whiplash maelstrom never knew a finer shelter than comedy-horror, and it never did the genre prouder than here. The things this camera does need to be experienced, so I’ll refrain from discussing specifics. Let’s just say the man chooses the most inventive position possible for almost every shot and pinwheels his tormented meat-bag humans around his camera like Damian with his first rodent, and he partakes in the mischief every chance he gets. The camera lurches about from space to space, doing almost literally everything it possibly can to simultaneously involve us in the action and elevate us above the action, separating off Raimi’s characters for mockery.
END_OF_DOCUMENT_TOKEN_TO_BE_REPLACED

For this week’s Midnight Screenings, being that Halloween is upon us and all, here are reviews of three modern would-be Halloween films destined for years of “Midnight” Screenings all throughout the land.

What was that old saying? In order to review a film, you have to make a film. Thankfully for us, Sam Raimi wanted to review a genre, and he took that phrase to heart. Drag Me to Hell plays like a greatest hits of horror, a loving pastiche of horror film clichés played here with a wink more than scream. We get an old gypsy woman straight out of Universal, all kinds of goopy fluids out of ’80s schlock films (the kind Raimi built his career on), atmospherics on loan from ’70s films with an air for the fantastique like The Exorcist, and a talking goat out of … does it really matter? This isn’t a particularly inventive film, but it’s the kind of rejiggering of the past we don’t usually see done with this much skill today. Fittingly, it’s both timeless in its recreation of classic horror norms and decidedly timely: it’s got a sly sense of humor aimed squarely at 2009 America, a moral joy for the bailout crowd that delights in turning bankers on their head and just giving them a generally messy time. And that sort of moralist high-camp has always been at home in the horror genre. Fitting then that, after years of big-budget brawn, this was Raimi’s glorious home-coming. END_OF_DOCUMENT_TOKEN_TO_BE_REPLACED

*For an attempt at something a tad lighter than my usual reviews, here’s the first in a month-long series of reviews of various superhero film franchises (because I hear these are popular nowadays).

While a somewhat unexpected choice at the time, in retrospect Sam Raimi was a perfect match to the goofy world of comic book fervor set up in Spider-Man. Taking a far larger budget than he’d ever worked with to create, of all things, a heavily marketed B movie, he ended up making one that works precisely because it is unabashedly in love with the fact that it is a B-movie, Snidely Whiplash-encrusted villain and all. While other films would come and go and do far more for comic book storytelling and character development in the process, Spider-Man does not bother with such trifles. For its whole running length, it is only itself, and it’s rather happy to be so at that. END_OF_DOCUMENT_TOKEN_TO_BE_REPLACED