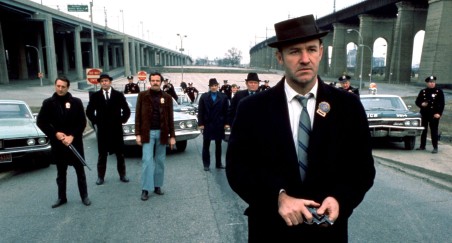 Having finished the extended yearly New Wave series that somehow held me hostage until well into the mid ’90s, I’ve decided to go back to a couple of reviews I had milling about but didn’t make it into the yearly bit. Both are related formally in that they star Gene Hackman and more existentially in that they illuminate important realities about the cynical ’70s that frighten like few films we can think of, and which may be more relevant today.

Viewing The French Connection in 2015 is a tall order, for the time period it exists in and its rampant amoral cynicism toward roguish individualist heroes seems increasingly ungainly today (even as it still pervades and even anchors our individual-smitten culture). The 21st century likes its cynicism to be of the slightly-masqueraded-by-humanism variety, and not the primal and primitively muddy variety exhibited by the early ’70s. William Friedkin’s The French Connection wholly defines this milieu, and increasingly stumbles into problems with its racist hero and its cautious way of staring him down without necessarily coming to terms with him. In today’s concerned world, The French Connection increasingly seems like a naively cynical product out of time with a none-too-well-guised fascist streak, a movie unwilling to address its problems and indebted to a form of cynicism perpetually stuck in a state of arrested development.

Admittedly, this is not for wont of trying. For one, Gene Hackman’s aberrant, even misshapen performance as New York Police Detective Jimmy “Popeye” Doyle alleviates some of the worry by generally playing against Doyle’s better interests and investing not in his sleek cool but in the flustered, misbegotten fact of his wretched personality. Even more potent however is the work of William Friedkin in the director’s chair, lending the film a camera that quavers only because it can’t run away in fear without dragging Friedkin along with it. The car chase is the justifiably famed high-point, filmed as a series of high and low angle contrasts and graced with Gerald Green’s bodaciously unconstrained, disreputable editing that cuts with such force you feel it in your gut, violating continuity editing and redistributing the screen economy to flow with a nervous, fractured energy that emphasizes movement and disarray over clarity and ease-of-access without even affording the old-school Hollywood style its due process. Friedkin’s forward-thinking POV shots thrust us right into the film’s momentous hurtling motion, pushing us into the action and scaring (daring) us with how involved we become in Doyle’s authoritarian quest.

Despite the film’s unthreatened forward push, Friedkin’s greatest trick is to find time for little moments that work as lynch-pins for the film’s cinema verite new realism style taken from the French New Wave and pushed to its psychotic breaking point here. Little touches, like a killer viciously shooting a police officer in the head and stopping offhandedly to grab his baguette and rip a small piece off to ingest, or a cut to Doyle’s partner yawning in the car, have the appearance of the camera catching the characters off-guard as they struggle and bumble through life. It never insists on the moments; it finds them, as if struggling to make out the details in its peripheral vision during its continual rush forward. It’s as if Friedkin is unloosening the hinges even as he tightens the screw one shot at a time.

Freidkin is not the only behind-the-screen star however. In addition to Green’s editing, Don Ellis’ jagged piano music and Owen Roizman’s perspective-swapping, highly grained cinematography give a sense of both sweaty mania and an unspoken chaos just waiting to scourge any who enter the film’s gaze. Ernest Tidyman (who also created the Shaft character, another of the memorable 1971 film class of against-the-book amoral cynics, in book form) wrote the screenplay with a down-the-middle, brow-beaten tone in mind and a focus on process and meticulous craft, both of which go a long way to forming Doyle’s detached, sociopathic, single-minded perspective on an uncaring world. In the film, he and partner Buddy “Cloudy” Russo (Roy Scheider) task themselves with taking out a drug trafficking ring headed up by French criminal Alain Charnier (Fernando Rey), who plans to import heroin into the US by way of French director Henri Deveraux’s (Henri de Pasquale) unsuspecting car. As things move along, however, we worry less about whether Popeye will succeed than whether he will retain his sanity, or whether those innocents around him will be safe from his wrath.

But then there aren’t any innocents are there? Of all the early ’70s loose cannon cops at odds with society pictures, The French Connection is almost undoubtedly the most nihilist. No one comes away unscathed, but the film is less interested in judging than studying. It is very much a work of place, establishing a self-destructive limbo that was New York City inseparable from the landscape of the American early ’70s. The French Connection is a cynical, damaged film that doesn’t particularly have any perspective on Popeye Doyle’s obsessions and character traits other than that he exists and is both an agent and victim of the society he lives in. Friedkin’s film is not especially invested in villains and heroes, but in the sheer presence of hell all around everyone and their fundamental human inability to escape it.

The only point where the film really does come to a halt is pointed and wildly successful too: the ending, set in a dirtied, downtrodden encapsulation of the broken-down world of the ’70s left out in the cold by uncaring human hands. Doyle chases his man down to an abandoned building and ends his hunt, the film shooting between implicating us in his impassioned craze, by giving us Doyle’s POV, and detaching us by shooting the location with a clinical exhale and haunt that approaches the horror Friedkin would bring to his next film, 1973’s The Exorcist.

The final scene is also the only part where the film tips its hand or shows a conscience: in an act of blind desperation, Doyle makes a huge mistake that costs a life and doesn’t even seem to care. Here, the impassioned film finds its running-and-gunning straight line forward crashing down before its eyes, wondering what it could have done differently and shocked at its failure to consider human morality. It’s left no longer panicking and instead looking on with pensive fret, destroyed by what it has taken part in and left with nothing to do but cut instantly and leave us hanging. It’s an astoundingly self-implicating moment and a moral murmur in a film that thrives on ever-threatening amoralism.

The French Connection is not a particularly political film, other than that it has absolutely no place for politics (and thus it is of the early ’70s to the core), not really justifying or demonizing police brutality as much as existing around it. Then again, the claim Truffaut made about war films, that they innately connect images and sounds in a way that excites and invites participation in war and thus cannot truly ever be “anti-war”, applies here too. These bad-cop films, from Shaft to Dirty Harry, invite excitement for the lifestyles they depict. None of them do so with more passion and and propulsion than the diesel-fueled bully that is The French Connection, an uneasy, unholy work that goes out of its way to make everything about its existence grubby and malformed but which definitionally cannot ever truly push back against its obsessive, racist main character. Its infamous tagline “Doyle is bad news but a good cop” doesn’t so much validate his cop work as imply that the standards of cop work at odds with the standards of being a human.

Whether this means that this ought to be the case because of the necessities of a difficult world, or that it is a shame that cops pursue this line of abusive, confrontational tactics when they could and should act in more humanist ways, it is difficult to tell. It does not invalidate police playing against the law, nor critique the law in any meaningful sense, both of which are moral crimes in an age where these realities have an impact on communities this film largely sidesteps. It only meaningfully comments on police crime at the very last minute of its existence, for it explores a world that did not regularly comment on these issues, and still does not explore them as regularly and with as much immanent rigor as it should. It is the kind of film where showcasing a grubby world amounts to commenting on it, a dangerous gamble that doesn’t necessarily leave the product on the right side of a fence that it doesn’t so much sit on as avoid. It is not an excusable film, nor does it even seem to attempt excuse, but it is artistically brilliant in capturing a certain pervasive  nihilist mindset of the time period, a mindset creepily and obsessively prescient today when we look at how unchecked police brutality still remains. Thawing out cop cliches with an irreconcilable diligence and slashing them to bits on the screen is its mantra; what its aim may be in pursing this goal may not be resolvable or even relocatable; that it has any opinion beyond curdled nihilism may be a lost cause, a frightening hope for meaning in a meaningless cinematic world. This is one of the undying fascinations of a work that does not so much exhibit positive or negative morals as pay no attention to them in siphoning out an amoral world into 100 minutes of festering, unkempt, always unraveling human deterioration. Problematic, absolutely, but it chills to the bone.