Warcraft is out in theaters this Friday generally doing nothing to save the video game adaptation from the cinematic crypt. In eulogy, here are reviews of four that have come and gone before.

Past its twenty-year expiration deadline, 1995’s once-comatose Mortal Kombat – none other than schlock-impresario Paul W.S. Anderson’s debut criminal offense – feels oddly whimsical and innocent today. With the likes of Warcraft desperately down on one knee praying for post-Lord of the Rings grandiosity, Mortal Kombat is a refreshingly slippery, stoopid animal infused with none of that straining, sprained-ankle seriousness. No, this is arguably the proper burial, or nail in the coffin if you will, of the nebulous non-reality cotton-candy fiction video game film, epitomized by the likes of the fringe-dwelling Super Mario Bros. and radioactive Street Fighter as well as spiritual comrade The Wiz.  Unfortunately, Mortal Kombat is not as incandescently disturbed, with not nearly as much bad acid-trip imagery spray-painted all about, as those films, but it’s an admirably hemorrhaging fount of pseudo-camp that is tacitly indebted to the chop-socky mysticism and bald-faced triviality of the insubstantial kung-fu lunacy that the Mortal Kombat video game was spiritually smitten with to begin with.

Gamely wielding an idiotic but effectively straightforward premise of an otherworldly tournament for the fate of the various dimensions, Mortal Kombat wastes no time throwing its tripartite protagonist – composed of one part fake Bruce Lee, one part fake Linda Hamilton, and one part fake Jean-Claude Van Damme – into a meat grinder of high flying, indifferently supernatural  shenanigans. Functionally a remake of Enter the Dragon, Mortal Kombat is abetted by Kevin Droney’s never-mature screenplay, with good sense never allowed to drive, always riding shotgun to a sloppy deluge of kung fu fighting. Released in a more innocuous time before science had gone too far and video game cinema was in the business of pretending it was a real genre filled with actual movies, Mortal Kombat never once trespasses on realms it shouldn’t.

Of course, the road to hell is paved with good intentions, and the enhanced budget here compared to prior video game films only reins the Looney Tunes antics in ever-so-slightly. The relative hysteria of Mortal Kombat isn’t quite as Novocain-inducing as the delirious gaminess of the Street Fighter film from one year before, but the fresh-faced Anderson is content to slather the spirited pointlessness of the game all over his screen sans-meaning. The arbitrary freneticism and neon-tinged, mercenary aesthetics of this earlier breed of blockbuster were unbridled by faux-sentimentality and thematic density, and it’s actually a little liberating in the context of the modern, homogeneous superhero cinema machine to watch a film so unencumbered by any theme at all. Mortal Kombat is happy to be sleazy and disreputable, if not necessarily good, but its charming artlessness occasionally approximates true accidental grace.

Coasting past the turn of the century and the ensuing flick-of-the-serious switch for blockbuster entertainment, Lara Croft: Tomb Raider is a more cogent, adroit motion picture than most pre-2000 video game adaptations. Rather than transmuting the genre into more sensible-shoe realms, however, this fact has only absconded with the genre’s free spirit. Neither as loose-limbed nor as impactful as Mortal Kombat, Tomb Raider’s modern sense of narrative coherence and character development only succeeds in making it bigger and more bloated, rather than infusing a dose of personality.

As opposed to creating an insubordinate vortex of bedlam having its way with common sense, the video game film’s compliance with narrative structure has only shifted what once seemed like storytelling-sabotage into the realm of storytelling-neglect. While video game films were once gleefully deprived of narrative, like Mortal Kombat, they now feel like films pining for narrative clarity and failing. Simon West directs down to the material, throwing it out into the street naked and alone as he gifts it clarity of action and nothing else. Although Angelina Jolie brings a certain spunk and sultry sass to a throwaway Indiana Jones rip-off role as well-to-do adventurer Lara Croft, the film around her is compacted and immobile – so desperately straining to make sense of itself – while she is liberated and lithe.

As with most modern video game adaptations, this Lara Croft is too manicured and safeguarded to ever threaten having a genuine life. Absconded are the protoplasmic incantations of incongruity found in the ’93-’95 video game films or even the ultraviolet spell of haphazard, disfigured awfulness in something like Mortal Kombat: Annihilation from 1997. Both are replaced with something more sedate and stolid, with the native-tongue of the video game medium – the hectic, go-for-broke, free-association anti-logic – eliminated for something that tries to be ambidextrous – both film and game – and ultimately evaporates into thin air. 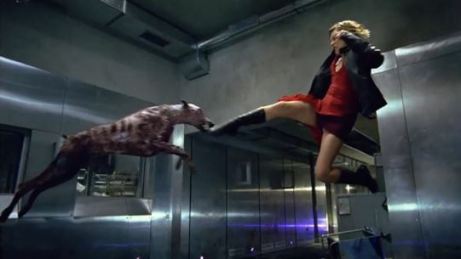 Paul W. S. Anderson’s return to the video game genre seven years after kickstarting his disreputable film career with Mortal Kombat is an uneasy peace-brokering between cyber thriller and pummeling action extravaganza, as well as a questionable merging between film and game. Rather than pumping each other up, the strengths of the two mediums ultimately curtail and flatten each other into a state of suspended, walking dead non-animation. The endearingly chintzy mysticism and Shaw Brothers kung fury of Mortal Kombat  –  a parade of silly, physics-challenged action scenes where a movie might have been – is decimated in the fires of a film that is, to paraphrase Poe, a nearly liquid mass of loathsome – of detestable sobriety.

Tectonic tunes and flash-bang editing designed to induce maximum concussion not only trivialize the potential terror of the sub-Aliens rip-off, but they torpedo the film’s horror credentials entirely in a race to turn the survival horror game into a beleaguered action film. Staccato edits don’t inject new energy into the material; they drain what little life exists to begin with. Trapped in the more solemn, consequential tone of the film, Paul W. S. Anderson’s heart-attack directing is left worse for wear compared to Mortal Kombat.

As if the temperamental, itchy filmmaking wasn’t enough, the film is similarly prone to tricking and attacking us with false narrative alarms and incoherent rumors of corporate sabotage and subterfuge, none of which amount to anything more than a gambit to infuse the film with bargain-bin, ersatz suspense and mystery. The only real effect of the drama – invading the action to slow the pace to a torpid crawl  –   is to tacitly divulge the film’s lack of trust in its zombies, suggesting that good-old flesh-eating is too passé for the modern era. Added to this implicit contempt to zombie fiction is how frankly clean-cut and antiseptically human-like the zombies are here, failing to function as either harbingers of destruction or, in a more academic way, flesh-crawling instances of production design. The uncloaked nihilism of the corporate paranoia exists at odds with the campy shots fired by scenes such as where main heroine Alice (Milla Jovovich) back-flips off a wall in order to land a karate kick in a zombie Doberman’s face. A good film can survive one of these, but both? That’s wishful thinking par excellence.

By 2006, the openly mercenary, make-a-buck blockbuster ethos of the video game genre had been burglarized by the go-serious-or-go-home histrionics of more tentatively mature, but not actually wiser, audiences no longer content to accept slovenly immaturity. In the 2010s, a more insidious, sinister variety of stupidity smuggled in under the covers of darkness and self-seriousness is the order of the day. Gone is the hammy irrepressibility of Christopher Lambert as thunder-god-with-the-rock-star-hair Raiden that felt so magnanimous just a decade earlier.

Perhaps the only video game adaptation to even half-heartedly take advantage of this trend of serious video game filmmaking is 2006’s Silent Hill, largely because it masticates the video game film into a conduit for atmosphere rather than narrative. Although it scavenges pieces from dozens of superior productions, there’s a tick of disturbed, unholy power to Christophe Gans’ scarlet imagery that nearly manages to defer the toil and trouble introduced by Roger Avery’s endlessly difficult, needlessly mysterious screenplay introducing themes it has no meaningful interest exploring. As a script, Silent Hill is not only desperately in need of a dose of structural integrity, but it boasts an abrasive temptation to stray into blasé symbolism and cloyingly overt psychological implications. Few horror films so readily extend the curse of psychological horror, wherein any ineptly filmed fright-fest is doused in a faux-respectability simply because the horror subliminally reflects something about the character’s mental worldview.

Psychology is all well and good, but it isn’t an end-all-be-all, and conceptual depth isn’t a patch on genuine filmmaking craft. Luckily, Gans’ ethereal, macabre visuals approximate craft, if not actually art, with some vivacity. Carol Spier’s divine (or undivine) production design borrows and de-intellectualizes her contributions to decades of David Cronenberg films with fleshy aplomb. And the cinematography by Dan Laustsen is able to layer the borderline schizophrenia of the bombastic, too-baroque conclusion in a subfuscous chill that makes the film seem more tasteful and undemonstrative than it actually is. Still, the appended critique of religious fundamentalism – delivered with a maximum of mammoth self-importance and too little actual mania – only negates the primordial power of a should-be-otherworldly film by asking it to address, trivially, a real-world moral crisis.