Raul Garcia’s clearly-heartfelt Extraordinary Tales nearly sabotages itself with an aggrandizing title that serves only to herald a hostile visual takeover of writer Edgar Allen Poe that the film’s mild-mannered recitations can’t quite live up to. With five of Poe’s tales retold and buttressed by five animation styles, Garcia’s film defers the immediate comparisons to Roger Corman’s seminal adaptations of many of the same Poe stories, even though Corman – in his bargain-bin wisdom – was able to transform those tales, reorienting their texture and form, in a way this film, competent though it may be, ultimately cannot.

Unfortunately, or fortunately depending on your proclivities, Extraordinary Tales has the misfortune (or fortune) of beginning on its weakest entry, an economical retelling of “The Fall of the House of Usher” that isn’t a patch on either of the seminal, and seminally avant-garde, 1928 adaptations that fractured the story and rebuilt it on distinctly cinematic lines, prefiguring discombobulated editing and fractured screen composition as the visual lexicon for redrawing Poe’s verbiage. In comparison, Extraordinary Tales merely condenses the tale, never reconfiguring or commenting on it, although the narration by Christopher Lee in his final role adds an undeniably sonorous cadence to Poe’s words.

Better is “The Tell-Tale Heart”, done-up in a minimalist black-and-white akin to the work of comic book artist Alberto Breccia and corroborated by a decades-old recording of Bela Lugosi wandering an errant path through the words. Complete with crackling record-scratch accompaniment, the recording – as well as the melancholy animation – add a sense of age and wither to the piece that feels like it was pulled out of a casket with a centuries old cask of Amontillado.

“The Facts of the Case of M. Valdemar” is partially comic-book paneled and suffused with mostly jaundiced greens and malarial, liver-failure yellows. Both suggest at once the sickness of the characters’ attempts to feign death (only ensnaring them in a perpetual limbo) and the delightfully sinister style of EC Comics, the mid-century horror compendium that formed the basis of almost every anthology (omnibus) horror film for decades. The knowing reference, along with the narrations and other visual allusions, speak to Garcia’s endearing commitment to reaching out to other progenitors in the horror genre (Roger Corman himself gets one of the last lines).

But too often Garcia’s heart surpasses his eye, as in the perfunctory fourth tale, “The Pit and the Pendulum”, where the animation is excoriated of style until it is rendered down to its foulest essentials, and not in the festering, lurking sense of the word “foul” you might be hoping for. The blocky, questionable CGI is left out to dry without any of the stylization that intermittently saves the rudimentary look from the bargain basket. At least this omnibus ends on a high note, as far as the five tales are concerned, with a delightfully narration-free “The Masque of the Red Death”, where the scarlet near-watercolor of the look splashes the none-the-wiser partygoers drowning in their own putrescent opulence. The red eventually curdles from a cordial welcoming mat to a death-marked signifier of insulation and plague-infested comeuppance. The more faded design in this segment, as well as the jerky, almost motionless movement, also comes closest to suggesting what someone like FW Murnau might have done with Poe, if he teamed up with an early-career Buñuel.

Still, even in the final segment, the animation is loosened, if not undone, compared to the tightly-coiled Poe originals; although the stylization turns the flatness of the look into a strength (rather than a detriment, a la “Pit”), even the most striking segment is at best a horizontal step from a particularly spirited public reading of the tale. Worse, a timid, too-literal wraparound narrative implicitly reveals the film’s lack of confidence in the tales themselves, rendering explicit – and thus comatose – themes which would have been better left half-buried and ready for excavating.

It doesn’t help that the film’s crux – Poe’s narcissistic self-obsession and mortal fear of his own withering away – has been the de rigueur treatment of Poe for decades. The film’s insistence that these tales are rather mundane without the appended commentary on Poe himself speaks to the film’s pocket timidity, its refusal to accept the macabre, mournful, hysterical beauty of the stories in and of themselves, sans interpretation or vestigial, trivial psychological structures.

Effective though some of these tales are, their achievements are minor, more like a peppered-up study session with your animator friends than a true test-case in how to adapt the written word onto the screen. Even the neater segments hew close to what a first-time animator might imagine for the material; the choices, while moderately striking, are all the obvious ones. The malodorous stench of Poe at his finest is never more than a distant whiff, a rumor of decaying flesh when it ought to sneak up on you like a sulfur-and-rot concoction that you just can’t wash away. It’s just too academic, and too rushed, for its own good. Poe could savor the word, the moment, and relish it with a vituperative desire.  The tongue of Extraordinary Tales isn’t silver enough. 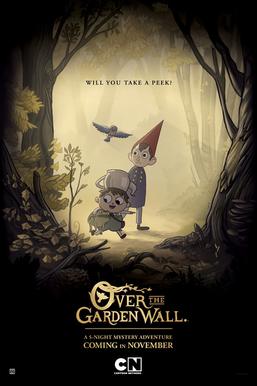 Over the Garden Wall

A rapturous little miracle of an animated miniseries that thrives – wonderfully – on the contrast between Cartoon Network’s fluttery, cartoonish in-house style and a more autumnal, heavily-lined style of animation; a devious little corker of a silently heartbreaking exercise. Patrick McHale’s bildungsroman tale of two children mysteriously wandering a path through an alternately crestfallen and whimsical forest to rediscover their souls is a delightful melding of fluxional tones that feels homologous to a little slice of magic.

All the more so on the magic front because it feels gloriously insouciant and stumbled-upon, like an uncouth melding of mettlesome fable and gleefully warped comedy producing an atmosphere as trembling as it is convivial. Without actually staging a logic-insurrection a la McHale’s day-job Adventure Time, Over the Garden Wall is content to exist in a state of perpetual distraction. The central story of brothers Wirt (Elijah Wood) and Greg (Collin Dean) is simplified to a series of episodic adventures that place a premium on mesmeric mood and oddball atmosphere over bulleting narrative concision. Although a creeping miasma of brotherly bonding and childhood adventure does rear its head to alleviate the sense that it’s all rather superficial, for the most part, this tale ably marries this streamlined thematic focus to the more whirlwind sideways-glances of the Cartoon Network machine.

If anything, the fact that the restive nature of the material is relatively silent here, subsumed underneath the more plaintive tone of the piece, allows it to sneak up on you all the more so. Younger brother Greg is a continually spirited slice of pumpkin-esque present-tense liveliness, rolling around without common sense and infusing the tale with a continual-motion-machine energy that externalizes the stream-of-consciousness machinations of the human mind and distills them in gregarious bursts of fancified humanity. But his rampant disregard for sense is enlivened, rather than curtailed, by the restful pace around him; the chaos of the comedy feels sneakier, more cunning, more diabolical, as though it’s actually invading something sensible and instituting bedlam.

The off-kilter abandon percolating beneath the surface – always unbalanced without ever bubbling over and senselessly blowing up – is animated by McHale’s gift for visual dissonance, most obviously in the profound sense of discomfiting wrongness afforded through the character-background contrast. The mystification of the Unknown (the name of the forest) is corroborated primarily by the gut-level perceptual clash between the boys’ Fleischer-influenced, surrealistically cartoonish, popped-out design and the more pastoral, faded, restful look to the backgrounds. The sense of “off-ness” is profound.

Elsewhere, Over the Garden Wall disseminates this palpable unease in each of its characters, be it a chipper but acerbic Melanie Lynskey performance as a bird that serves as the boys’ only guide (while making her downtuned mournfulness clear underneath) or a venomous, weary Christopher Lloyd vocal as a beleaguered woodsman trapped in his own past. Each exists in a liminal state between moods, rather than as one overarching feeling. The same is true of the series’ sequences. Whether it’s the particularly forlorn beauty of an early harvest festival, the disturbed whimsy of a ’30s-styled dream sequence, or the invasive twee-horror of a theoretically haunted tea manor, Over the Garden Wall is both more restful and judicious than the typical Cartoon Network norm and, somehow, significantly more perturbing. Always perched on an uneasy, temperamental harmony between multiple emotions, Over the Garden Wall is an allegory for the need to lose oneself in order to be found that ever-fittingly always seems to be losing and finding itself in media res.