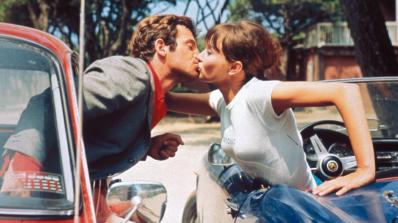 Pierrot le Fou is a candy-coated slurry of modernity as only Godard could have dreamt: cinema, philosophy, technology, tectonic outbursts of Demy-esque sing-speaking, and bellowing gusts of ennui encapsulated in a manic fantasia. The intersection of Godard and color alone is given primacy of place in the dueling introductory collages, two bewitching technicolor symphonies from Raoul Coutard (the French New cinematographer if ever there was one). In the first, a contented bourgeois couple wanders through a party that turns into a sepulchral haze as women spontaneously lose their tops in a playfully tossed-off expression of benign and malignant pop culture coalescing into a heated maelstrom and exploding in mutual psychedelic abandon. In the second, the same malleable color scheme, slipping between primary colors like stages of sleep in a seizure, basks the couple during their hasty, browbeaten escape from the party. In relying on the same color scheme during the party and during the party-escape, Godard furtively suggests that, even in hazarding a life on the run, they’ve done nothing but ensure your submission to the bourgeois, day-glo circumstances you escape from.

Godard’s dueling strains of whirlwind midnight cinema trysts and toxic self-ripostes reach an apocalyptic ambidextrousness within the raffish Pierrot le Fou, a candy-coated, cannibalistic work of never-finished tonal anomalies ricocheting between invasive injections of bristling satire and nonchalant excursions into off-hand happenstance. Following up on the cinemania of Band of Outsiders, Pierrot is Godard’s lust for and envy of cinema pumped on into a cocaine-addled, hallucinogenic brigand that clocks itself over the head every time it threatens to induce the rigor mortis of tonal complacency. This is hip-fired, slashed-brush cinema where Godard’s jittery interstitial-cuts in Breathless have rotted the film from within, subsumed the picture and overtaken it with an infestation of totalizing, overpowering absurdity. Character and narrative motivation are no longer merely discursively critiqued expunged completely as the frail vestiges of a social propriety Godard has no use for. It’s Godard full-bore.

No longer are we watching Godard the hooligan; he’s grown into himself, repressed any appendices of commonplace cinema left lurking within him, and emerged as a full-blown firebrand of a mad scientist. The “Breathless off the deep end” view is corroborated by the way Godard doubles back to the spirit of New Wave muse Nicholas Ray’s They Live By Night, pursuing a similar tale to Breathless: two lovers on the run from the subcutaneous obsolescence of wallowing around in middlebrow complacency. If Breathless purposely subtracted motivation and psychology to turn narrative into sketchwork, Pierrot positively shreds it to tatters as Godard slings scenes as uppercuts and below-the-belt hits with the improvisational framework of free-form jazz. The couple wander an errant, murder-happy path, but the nature of the kills are arbitrary and even immaterial.

Godard’s headstrong, obstinate Pierrot is an apex of his obsessive form, self-conscious and self-ennobling in equal measure and never too fascinated with itself to not raise a ruckus for the sake of muckraking and stirring the pot. On one hand, then, Pierrot is the acme of Godard’s adolescent, self-interested, id-driven cinema about id-driven characters who preclude psychology (the baseline of most Western cinema at the time) entirely. Pierrot’s ever-green sense of rule obstruction is most buoyant in cheeky, tossed-off injections of wall-breaking character-and-audience interaction, but more notable is Godard’s thoughtful restriction of our ability as audience members to invade the protagonists’ minds. We wish to understand, and Godard seems to rewrite the rules of his characters at every turn. In doing so, he interrogates the very misconception that characters in film have recognizable psychologies in the first place. Pierrot sours the kinetic playfulness of Band of Outsiders into an irrational, unhinged maelstrom of deranged psychosis; playing with cinema and recreating the movies of the past is now no longer a children’s plaything but an edge-of-sanity rhapsody.

The second half of the feature, when momentary release curves into attrition and meandering hopelessness, reveals Godard’s maturation as a self-critical artist whose impulsive filmmaking style explores its own sense of contrition. The initially glamorized depiction of escape turns into a rumination on the ramifications of humanity’s incessant ability to discover ennui in any and all circumstances. The world of freedom still traps these characters in the walls of the film as the film interrogates its own motivations by exploring how the characters receive no joy out of their onslaught; they’re screen writer’s constructs, far more openly than in Breathless of Band of Outsiders, works that seem like Frank Capra by comparison.

Sure, Godard imbibes in disdain and celebration (it is, above all, the funniest of Godard’s films, with ribald, disobedient mise en scene packing in enough gallows humor to fill all three of Peter Sellers’ characters from satire-masterwork Dr. Strangelove from the year before, and that doesn’t even intimate the sublimely bedlam-inducing, borderline-slapstick music choices throughout the film). But Pierrot morphs into lamentation before the day is done. It’s the kind of film that could make you fall in love with cinema, turn you head away from it, throw your hands up in bewilderment, and ultimately give in to the feeling that you’ve come away bowled over by a work experimenting with its limits in every scene. It’s nothing short of the Looney Tunes of the French New Wave, and I’m sure Godard would appreciate the comparison.