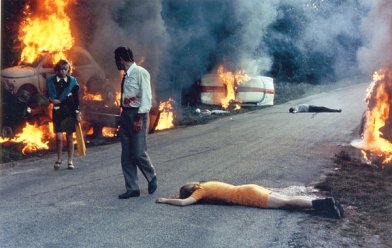 Update late 2019: After realizing just how omnipresent modernization rhetoric was in France in the ’60s, how severe the hypertrophy of automation, how extensive the rhetorical quickening of the society, and how emphatically connected the unending road and the conquering car were to those symbolic projects, Godard’s sudden, inexorable brick wall seems all the more brutal, and all the more perceptive. Weekend is a centrifuge that spins what many were calling “modernism in the streets” into a perhaps-unrecoverable tailspin, a remorseless, unbending monstrosity propagating an unshakable doubt about the future of the world and the growth projections of Western modernity,

If Pierrot was the cataclysm, Godard’s Weekend is the fallout. An offhand joke midway through Pierrot – one of the many murders either committed or not committed by the central couple is presented as an impossible Dadaist implosion of automobile parts turned on their slantwise dimension – is curdled into a drunken stupor in Weekend. In Pierrot, the moment was baleful in its satire but flippant and recklessly fleet in its unceremonious, abstract, sudden-gust-of-wind presentation. In Weekend, an automobile pile-up rendered avant-garde art piece stops the film dead in its tracks, intentionally so, as the main characters errantly slobber between cars as subversive minimovies play out between the other passengers. It’s an elegant, wrathful expression of Weekend’s position as the comeuppance for Godard’s race-car cinema, a self-imposed crackerjack crash of non-narrative film now stopped dead in its tracks by its own ambition. Cinema breathing in its own fumes too long has turned into the cinema of the fumigated.

If Pierrot defined Godard the mad scientist at is most manic, stitching together a Frankensteinian work out of sheer willpower, Weekend is Godard the catatonic dementia victim. Godard spent the better part of a decade resisting the dueling demons of sycophantic servility to mainstream cinema and obsequious self-canonization. By 1967, Godard would willfully abandon narrative pretense entirely for a series of Marxist essay films, there was perhaps nowhere left to go but to reconsider his own self by finding malignancies amidst his own intestines. If Pierrot was Godard’s outre, spirited drag race, Weekend is the sight of cinema gloriously spinning out, crashing, burning, and hiding absolutely none of it.

Thus, Godard’s famously frolicsome camera gesticulations and maximal mise en scene – applied in Pierrot to achieve the apotheosis of winsome absurdity laddered with an inside-out gangster picture – here are meant to induce a gluttonous coma of sorts, a post-apocalyptic malaise as volatile as any of Godard’s prior films but somehow more disturbing and fervently nihilistic. The film begins with oppressively materialist bourgeois couple Corinne (Mireille Darc) and Roland (Jean Yanne) each simultaneously, surreptitiously plotting to murder one another, except they must simultaneously, duplicitously carry away the country-home murder of Corinne’s mother in order to fight over her inheritance money. Godard’s usual cocktail of assaultive social rue and free-associative, ever-limber narrative non-storytelling is downtuned significantly as he stares with his characters into the chasm of human emptiness perpetrated by modern capitalism in what amounts to Godard’s most vehemently disturbed anti-social tract.

From there, the famed pile-up as Corinne and Roland stutter around a massive roadway claptrap, where each little car proves a portent for future events in the film, is both a mournful prognostic and a deceptive parody of the very foreboding imagery the film relies on for its despairing odor. Godard throws in all that and the kitchen sink, short-circuiting expectations for meaning or thematic import and divining a Bunuelain aura of spectral incongruity as he exercises a sort of demonic agency over his characters and their forward movement. Tracking the sequence for eight minutes, the only interstitial realms are the mendacious title cards spliced in seemingly at random. Positing a lapse of time that covers at least two hours, they reveal the perfidy of the visual cohesion of a take which ostensibly occurs in real time over the span of less than ten minutes. It’s the sight of a film subject to multiple personality disorder fighting for control with itself and, in doing so, revealing the lie of cinematic honesty to begin with. If the shot implies an eight-minute take and the title cards expose the time to be between two hours on a Saturday, who’s to say either is correct in the first place?

Elsewhere, the blaring monotone of the car horns attains a Hermannesque anxiousness even as Godard delights in inserting perturbed music in sequences that blatantly reject the mood assumed by the aural overlay. All of this is as cheeky as early period Godard ever got, but it’s overcast with a pre-Python disarray of a decidedly more sorrowful intent. The bipolarity of the earlier Godard films has turned into full-on schizophrenia here, with the film’s tempo defined not via risque content so much as a form that rejects the limits of social convention and even sanity. Diegesis and non-diegesis test one another when not outright stabbing one another in the back. The style of the film itself is as vicious toward the characters as the pair of trash collectors who occupy the lone voice of reason in the film, contrasting the faux-eloquent company around them that curdle into carnal animals on a whim and without a cue.

Speaking of cues, Godard’s film delectably misses them throughout, chiseling away at its selfhood and concocting fissures in its very cadence as a representational art of human motion and sound. It feels like a work directed through Godard’s duress at having to cohabitate with the world around him; the hyperconfident, sinuous egomaniac zombie dance parties of his earlier films have been distended into necrotic a brimstone-spitting holocaust. It remains a vilification of material culture that interrupts and unsettles the very material of celluloid itself. Even a mordant polemic speech near the finale turns speechifying on its head by stopping the film dead in its tracks, deliberately articulating just how incompatible legitimate political intellectualism and cinematic entertainment may be after all.

1967 was a year of seismic shift in the real world, and it remains a much-vaunted 12 month period of seismographic shift in the Hollywood landscape as well, the so-called birth of the American New Wave. But many of those cinematic changes in American film would have to fester in the swamp of social unrest for a few years before evaporating, infecting the air, and blossoming into full-blown acid rain by the early ’70s, when the New Hollywood really took off. But in 1967, before the Americans even fully acknowledged the corpulent stagnation of Old Hollywood necessary to give rise to any “New” to speak of, Jean-Luc Godard directed an obstreperous work of aural ruination and visual wreckage that encapsulated the ruptured, fissured milieu of the times, staging the mental collapse of society by collapsing film before our eyes. With Godard soon to initiate a lengthy moratorium from celluloid, Weekend feels a little like an open-casket funeral for the first stage of his career, and maybe a sample essay for the end of the world.