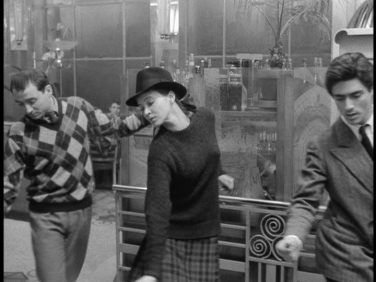 If Godard’s cinema prismatically spread its wings soon after Breathless, perusing the variant nascent realms of that debut’s arrythmically cadenced virtues, Band of Outsiders decides to leave it to other features to experiment with the nihilism of Godard’s investment in gender, modernity, and self-reflexive filmic form, even as it encapsulates features of all of the above. Godard would test his schismatic brand of cinema more vigorously in Pierrot le Fou and procure a more demonstrative premonition of cinema’s fallout, and the world’s abomination, in Weekend. But Band of Outsiders is far too busy with its own magnanimous brand of cinematic joie de vivre to concern itself with the end of anything. Of all of Godard’s films, Band of Outsiders most fully encapsulates the momentous high of going to the movies.

Fittingly drawing from Godard’s favorite genre – the film noir – while providing a ribald riposte to cinema of respectability, Band focuses on two criminals (Franz, played by Sami Frey, and Arthur, played by Claude Brasseur) who team up to coerce Odile (Anna Karina), the woman they both love, to help stage a robbery in her own home. A twisty, serpentine narrative might be the expected remedy, but Godard gives us the slip by concocting something more sinuous when he mostly abandons narrative framework altogether for cinema pastiche at its most unbridled and kinetically unstable. Even more than Breathless, Band of Outsiders feels a little like Godard staging elaborate home videos. But then, who wouldn’t want one of the great directors operating at their least overweening and most gregarious to film their home videos for them?

So then, cinema charades is the name of the game, with Godard’s characters folding the movies they love into their very lives as Godard indulges in some of the most sustained cinematic cocktail creation ever filmed. An impromptu dance number plays like a Beat Generation La Dolce Vita as Godard stretches cinema to its most malleable texture such that it’s like liquid celluloid. Godard’s fizzy soda pop bubbles with a delectable infatuation with the form of the American B-picture that tips into effervescence time and time again, most notably in the title screen where faces have a seizure on screen to the backing of a rambunctious piano tightrope act. Godard opens with a statement to the power of disruptive editing not to analyze, but to invade, and ends with a wry, lithe, accidental staging of a finale, featuring one of the most savagely comic death scenes in all of cinema . It’s as discombobulated as anything in Breathless, but it doubles as a treatise on not only the value of discombobulation, but the pulsing strobe light incandescence of a cinema that lives for the moment.

Band of Outsiders also stages the prelude to the panic attack of Pierrot le Fou where the frivolous ruptures into the demented. Godard’s cinematic roller-coaster is, if anything, even more probing than Breathless in its ringing distortion of human identity to the point where playing cinema games or recreating cinema descends from the level of narrative, manifest content to the latent architecture of the mise en scene as shots dance around narrative without ever providing the psychology we expect to buttress that narrative. Godard’s form undercuts the ebullience of the cinema-high with a paragon of cinematic postmodernism wherein each edge-of-your-seat moment proves a presentiment of the failure of people to locate cohesion and identity in their lives.

Living in the noir world, as the characters so wish to do, becomes untenable as Godard carefully creates a conflagration between bubbly romanticism and what would become the choking paranoia and instability of Pierrot. Watching Godard’s treatment of the noir, we’re aware that the director concedes the form is an off-hand game, an eruption of youth culture dipping into a budding easy nihilism, if not a moral rot. These are characters, as so many of Godard’s philosophical constructs were, who measure meaning in wearing masks and construing lives out of thin air rather than literally engaging with their own.

Thankfully, Band of Outsiders eschews the sometimes cloying, suffocating asperity of Godard’s shriller, more congratulatory works. The intellectual critique of characters-as-constructs is here tethered to a deliriously inescapable, freewheeling zest for life matched in none of Godard’s other films; it’s his ultimate tip of the hat to dressing up in your parent’s clothing and paying homage to your forebears by turning cliché into found object and playground within which to let off some steam. And maybe to attune to, and appreciate, the way that all our identities are hewn from past types. Originality, after all, is just as much what you do with what you are given as it is inventing something new to give in the first place. It’s easy to underwrite Godard with the refrain that he rewrote the rules, but it’s just as important to remember that he found freedom by intimately knowing what the rules were in the first place.