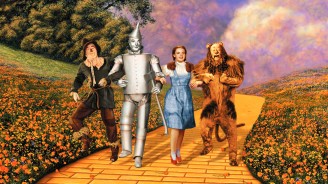 With the imminent release of The Witch upon us, let us look back at another famous movie with a villainous witch.

Probably no film has been loved and embraced by humankind more than The Wizard of Oz, but something about actually discussing the film almost feels heretical in an environment where blind belief in its charms has encumbered any and all serious consideration of the film as art. That’s not entirely a negative; a magisterial work of childlike ambition like the 1939 Wizard seems to tap into a font of innocent emotion with its blaring cacophony of primary-colors and elegantly simple, almost subconscious color contrasts. So much does the film take us beyond the pale of adulthood that it feels disingenuous to deny its transportative effect that functions on an almost pre-cognitive level.

But fighting the film, or debating with it, only reinforces its glimmer still. Curiously, the omnipresent adornment ornamented upon the film through its nearly 8 decades of existence has, perhaps not surprisingly, somehow both  exposed and denied film’s beauty as a painterly work of patchwork craft and carnivalesque filmmaking. So too has the love affair with the film elided some of the more dissonant behind-the-scenes disturbances that created a film-in-flux during the making and ultimately affords the piece a fascinatingly contrasting texture, most notably between the black-and-white and colorific sequences.

That the traumatic sepia-toned introduction and conclusion of the film is stylistically opposed by the fluorescent color of the middle passage is arguably happenstance – the byproduct of mastermind King Vidor called in at last minute to film the black and white bits after Victor Fleming was whisked away to helm the most grandiose Hollywood production ever. But the contrast in the styles – luminous, roving camera and mystical depth-of-field in the “real world” segments and stagebound, shallow (lateral, not superficial) materiality in the dream sequences – is no mere circumstantial part of the film’s success. Tampering with the balance would disturb the essential thematic and experiential contrast between life as reality and life as a dream approximated by the film. It’s simple stuff, but gloriously elegant on the screen.

Still, The Wizard of Oz is not the product of either of these men, nor is it the woodwork of any singular person at all; the collective spirit of the text is mirrored in the non-auteurist, or multi-auteurist, affair of the production, with a veritable army of on-screen and off-screen talents unspooling intoxicants across the pastel palette. Glorious, sumptuous, rapturous; all of these things The Wizard of Oz is, but this is merely the (be)spectacled tip of the iceberg in a film where color boils down to the thematic texture of the piece. I won’t recount the story, primarily because it unfolds in a spirited flurry of hyperconnected, singular images more than through the connective tissue. The red cheeks and white and blue dress of fair maiden Dorothy,  a figment of youth and innocence emblazoned in gee-wiz-zed Americana colors. The discourteous, gaudy green of the Emerald Palace itself. The haughty black-and-toxic charade of the noxious Wicked Witch. The tightly-coiled yet deliberately inviting golden of the sunny Yellow Brick Road. All simple, unrepressed visions of space and geometry, but they burrow into the mind with the ferocity of a Pollock painting or a Frankensteinian Basquiat monstrosity.

The temperaments of the colors encapsulate a child’s eye view of the world ensnared in the dreamy haze that forms the backbone of the film, all inscribed most notably in the amusingly bespoke land itself. The land of Oz is, cheekily or not, lightly metatextualized in the way Fleming’s sets don’t much bother to hide their nature as filmic fiction. Call it wishful thinking, but there’s a deceptive radiance in the tentative set-design’s implicit suggestion that all of this is a dream or a fiction barely stapled together by sheer willpower on the part of a child’s tortured mind. We feel like looking to the periphery would destroy the illusion by revealing the seems. Yet for a child entranced in a dreamlike peril where stopping to doubt oneself could shatter the illusory fiction around you, that’s exactly the point.

Scary is a debatable word, but primordial angst brews within the murk and mire of Oz as well, with the dreamland trepidatiously running headfirst into its negative-emotioned alter-ego of the nightmare. The obvious nightmares, from witches to feral flying monkeys, have their moments. But the most trenchant are more insidious, from the lost-and-found nature of Depression-era America glimpsed in the periphery of Oz itself to the inability of our dreams to truly elude the watchful eye of our real-world compatriots who somehow manage to guest-appear, only slightly altered, in even our moments of escape, a vision of a Depression-era people displaced but not devoured. Other beguiling questions arise as well, like the underlying presence of a female-dominated society and the initially ineffectual or incomplete nature of many of the males in the film, reflecting a non-traditional, more folkloric interpretation of society at odds with the distressed but not fully displaced patriarchy of the Depression.

Simple though it may be, The Wizard of Oz is altogether less opaque and one-dimensional than its undivided, uncritical affection often reveals. Inspired if not revelatory filmmaking traverses the winds of childhood and releases a spell of surface-level beauty belying diaphanous reflections on childhood, home, identity, displacement, and the nature of self in a disrupted and disputed state of mind. Superior cinema surely exists, and many less venerated films are more deserving of canonical status. But The Wizard of Oz invokes the tenuous, provisional nature of childhood and the pangs of anxiety for growing old with surprising dexterity, fluidity, and in many moments, even grace.