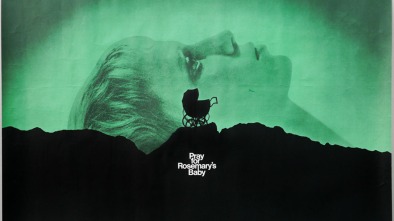 With the release of The Witch imminent, let us look back at another famous horror film to rely on witches, however indirectly, to go bump in the night.

Cutting to the chase: Rosemary’s Baby, Roman Polanski’s cinematic breakthrough into the limelight, isn’t a patch on three of his four prior films. In this 1968 effort, his American debut, absent is the wire-suspension tension of Knife in the Water and Repulsion or the beguiling black comic stylings of Cul-de-sac, both of which have been replaced with a slowly simmering psychosexual milieu of modern New York malaise and maladjusted, endlessly percolating desolation. For the most part, the trade is a lateral one rather than a vertiginous rise or a demonic fall, but a little flab cakes in around the middle of this lengthy film, making it somewhat lesser than any of Polanski’s previous films. At some point, letting us bask in the distress and withheld-desire sours into not trusting the audience to come to terms with the screenplay’s layered  paranoia and its commentary on the brutalistic power dynamics of gender in the modern era. In other words, the film spends a little too much time underlining its themes.

Even when the film’s inertia does slightly sabotage its rising action, however, it also allows the film to slip right into the ennui-addled life of the rising American New Wave that Polanski would come to represent in spirit if not by birthright. Arguably, Polanski’s first foray to the US loses the assaultive playfulness and carnival-games radicalism of his earlier works, but we’ve also gained a more mature, thoughtful, astute progression of images that hunkers down on the salacious abuse of Rosemary (Mia Farrow) by her husband (Guy, played by John Cassavetes), with seemingly every one else who enters Rosemary’s life along for the ride in destroying her sanity. Steadily mounting paranoia, invoked in startling close-ups on Farrow’s frail, progressively smaller face and frame – close-ups that appear at once invasive and sympathetic – gasp at the horrors of a life destroyed by reliance on a society seemingly hell-bent on molding you into its plaything. As a feminist parable, it’s about as cut-throat as a Hollywood film in 1968 could be.

Polanski the screenwriter, adapting Ira Levin’s novel of the same name, is more to blame than Polanski the director for the slow-burn (as he has since reported, Polanski believed that it would be unethical for him to deviate from Levin’s book). The result is just a tad stifling in its too-literary ambitions, lacking the feral filmic punch of, say, George Romero’s Night of the Living Dead from the same year. Nonetheless, Polanski’s screenplay is able to engrave the film in Levin’s air of murderous dread and phantasmal, Byzantine beauty a la classical horror cinema, a throughline that would be pursued in a thread of British and American horror films throughout the 1970s before the rise of the slashers in the early ’80s. Mundane, domestic spaces accrue a truly demonic import.

A sensibility derived primarily because Polanski’s direction is as impeccable as ever, having lost none of its throat-pulsing, back-alley mischief with his passage to America. Rosemary’s Baby, an instant success stolen from original director William Castle (who was retained as producer as a consolation prize, if nothing else), sees Polanski’s eye for tyrannical domesticity untempered. Nearly every student of the era has wallowed in the elegance of the mere shot of woman being blocked by a door (that such a rudimentary conceptual shot nonetheless bears such nightmarish import on the screen under Polanski’s hands is evidence enough that his direction alleviates any and all concerns about the screenplay). Elsewhere, Polanski’s mischievious framing invokes a sense of everyday subterfuge as the dearly departed seem to encircle the film upon the introduction of the autumnal apartment complex Guy and Rosemary have established tenancy in. Their apartment room itself is a blossom of deconstructed everyday space, a hall of mirrors refracted out of bland, middlebrow cushiness by Polanski’s impeccably corrosive habit of severing Farrow’s china-white visage with nearly every object he can find in the frame.

Rosemary’s suspicions that she has been raped by the devil – the fallout of a rude awakening that leads to an eventual pregnancy – are covered-up by domineering husband Guy and her suspiciously elderly neighbors who seem to thrive on steering Rosemary toward specific doctors and health specialists who give her the okay that nothing is awry (Guy, for his part, says that he had sex with Rosemary while she was asleep, and this resulted in the pregnancy). Over time, the most oppressive figure in the film proves to be Polanski himself, however, teasing us with the implication that Rosemary is defaulting on her sanity. The screenplay is well aware that its chauvinistic, victim-blaming audience has been reared on the “hysterical women” trope, less a sub-genre and more a coil wrapping itself thematically around all areas of Western fiction. Assuming that we will accept Rosemary’s insanity and running from there, Polanski’s screenplay derives its most serrated jabs from twisting our expectations that Rosemary is simply delusional, litmus-testing the audience for their own gender biases in the process.

In this light, the film seems like a riposte to decades of crazy-women pictures and a rebuttal to Polanski’s own entry into the genre, Repulsion. The finale, when Rosemary’s sanity is clarified in all-too-brutal terms, is not only a tonal twist, a resummoning of Polanski the gallows comedian, but also a festering fist right into the darkness and misogyny at the heart of our nation’s faux-civil attitudes toward pregnancy. If Rosemary’s Baby is also a more staid, stately work of filmmaking than say Repulsion, there’s also a fair call for such formality in the material; the expressionistic, external-rendering-of-the-internal focus of Polanski’s previous works is no fit for a film that is deliberately about external oppression and never truly about the fractures in Rosemary’s mind. What emerges is a film pretending to accept our misogynist assumptions that Rosemary will be insane, only to pull the rug right out from under us when it turns out that Rosemary’s internal self was the only friend she had all along.

Fittingly then, we are not set adrift in the cascading turmoil and crumbling psychosis of Rosemary’s brain a la Repulsion; instead, we are cast about viciously domestic spaces and rooms that conflict, conspire, and coagulate around Rosemary to suffocate and strangle her increasingly skeletal, ghostly-white being. Our task for the film is to sit and watch as the outside world, be it abusive men, seemingly timid elderly neighbors, businesslike professionals, or the cinema-goer in all of us, convinces Rosemary that her mind is deceiving her. The terrors of Rosemary’s Baby are legion (I haven’t even mentioned Krysztof Komeda’s truly spine-tingling score). But the most abominable of all are the combustible biases and expectations the audience bring into the theater, Polanski’s primary ammunition for undoing years of motion pictures that have exclusively relied on the body and mind of the female as object and nothing more.