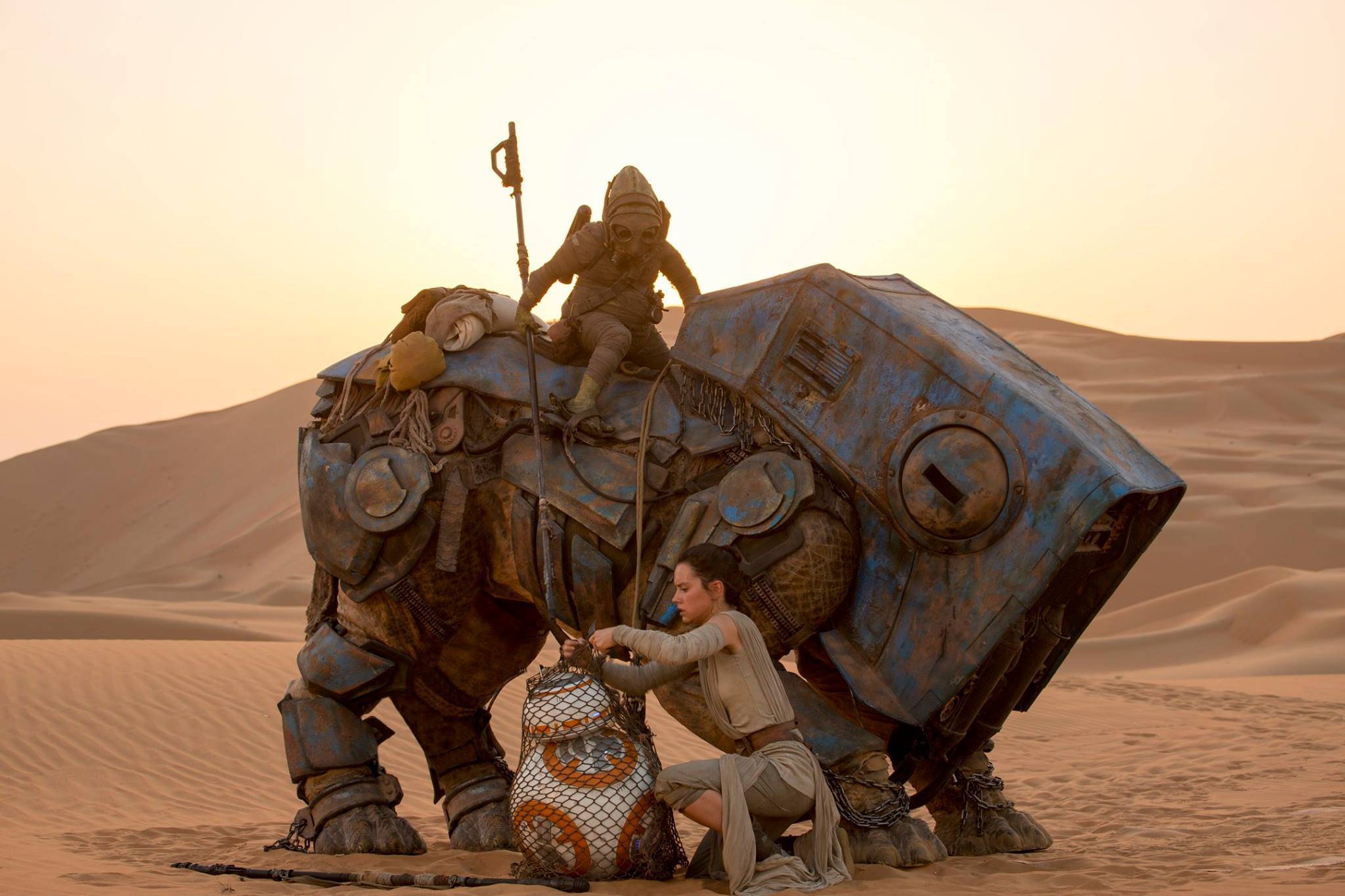 Calling Star Wars: The Force Awakens the least exploratory, least imaginative film in the entire Star Wars canon may seem sacrilegious, but skilled mimic J.J. Abrams doesn’t seem to care. Arguably, neither should you. If anything, The Force Awakens suggests Abrams finally coming to terms with his shrewd, somewhat personality-deficient style and applying it to a film that remembers its forebearers at levels both broad and minute, from the grand narrative sweep to the background-detail peripheral-vision valley. The resulting film isn’t wholly stupendous, but the palate cleansing nature of the piece is refreshing. It’s more a homecoming for old friends than a dynamically calibrated bullet from the future, an excavation of an old tomb and not a bold and brash attempt to boldly go where no one has ever gone before, to quote some other franchise found somewhere in this universe or the next.

The surprisingly nimble The Force Awakens is not without its problems, and most of them are insurmountably intertwined with its relatively dexterous, if low-key, successes. For one, the film’s lightweight narrative is so entangled in the innards of the original trilogy that the film threatens to not even function as a work all its own. However, some of the film’s most astute pleasures suggest not only Abrams rekindling a meter of the original trilogy’s fire but his willingness to reconfigure rather than simply remake. The tale begins with a droid, BB-8, carrying a message to the aged sands of a desert planet, a message which will soon envelop a selection of youths in a quest to fulfill much greater origins than the hectic nature of their early lives led them to believe. Sounds like Star Wars, huh? Yet newcomers Rey (Daisy Ridley), a desert scavenger, and ex-stormtrooper Finn (John Boyega) don’t neatly map to specific characters in the original trilogy. Nor does the central conflict so cleanly refigure the original Star Wars. Sure, it involves a crypto-Galactic Empire known as the First Order attempting to retrieve the droid, which carries coordinates to the long lost hero of the old rebellion, Luke Skywalker. But by the time the film’s quick-footed two hours have soared away from us, The Force Awakens has referenced, renamed, and remolded its own quilt out of excised parts from all three of the original features.

Still, it isn’t the story of The Force Awakens that saves the day so much as the crispness and dexterity of the filmmaking. The retro-futurist aesthetic of this Space Western is inspiringly old school, to say the least, especially in its introductory portions where Abrams is gamely recalling the debt George Lucas’ films owe not only to mid-century pop sci-fi but the rootin’ tootin’ Westerns Lucas was weened on. New desert planet Jakku is saved from repeating Mos Eisley’s charms by its lived-in, decrepit, bones-and-husks ship graveyard stature. Lucas himself was often aping John Ford, and a few of Abrams’ wide shots conjure visions of Ford’s cherished Monument Valley, an earthbound location that nonetheless inspired visions of a primeval, mysterious land all its own.

The grainy 35 mm celluloid – supervised by Dan Mindel – saps the film of the overweening, acrid digital halitosis of Lucas’ second trilogy of films and reinstalls an aura of analog, B-movie grime that grounds the film even as the camera sweeps across the sky and digital effects envelop the screen. Even if this film doesn’t have any new ideas of its own, the same sacrosanct, simple images of the original trilogy, carefully twisted and bent without breaking them here, bode well for the film’s primary-colored swill of simple emotions emphasized in primary visual gestures. The night raid that opens the film bleeds genuine blood, and enough dust cakes the environs to swallow you in the film’s tactile vision, a trenchant reminder of the much-vaunted “used universe” feel of the original pictures.

As for the characters, it says quite a bit about the performers that some stay afloat amidst the often reckless storytelling. Ridley is an absolute revelation, and Boyega shows that the passage of four years hasn’t seem him mature so far enough to lose his winking outsider charisma exhibited in the wonderful Attack the Block, itself very much of the post-Star Wars matinee serial aesthetic. Oscar Isaac, one of the best actors of his generation, is mostly wasted in a qualified cameo, as is his Ex Machina costar Domnhall Gleeson who radiates puckered British authoritarianism in his best scene, a Triumph of the Will-inspired assemblage of astringently perfect visual symmetry. Andy Serkis and Lupita Nyong’o survive the digital malformation of their everyday features as the shadow-bound Supreme Leader Snoke and the friendly, wistful Maz Kanata, an old friend of Han Solo’s, respectively. Adam Driver is perilously positioned with his fate in writer-director Rian Johnson’s hands for Ep VIII, but his benighted, temperamental Kylo Ren, a successor to and lone cheering squad for Darth Vader, is impressively mercurial in what amounts to a question mark of a character for now.

And what of the returning factions? The cantankerous Harrison Ford tinges his bilious rapscallion Han Solo with decades of loss and regret, proving far more assured in the role than he ever was in any of the original features. He is also afforded the lion’s share of the returner’s screen-time along with best buddy Chewbacca (still Peter Mayhew after all these years, who infuses the role with physicality and offbeat comic zing). Carrie Fisher similar balances sorrow and whimsy as General Leia Organa, a fighter as always. Anthony Daniels has a moment or two to shine as C-3PO, although his partner-in-crime R2-D2 is out of commission for most of the movie (meanwhile, new droid BB-8 is a wonder of expressive gesticulations, and one of the most fully realized characters in the film precisely for the droid’s silence). Hamill does appear, but a variety of reasons conspire to make any commentary on his performance functionally useless.

In general, however, Star Wars: The Force Awakens is awash in enough of the freewheeling, gee-whiz spirit of these characters, if not always attuned to their particulars as people, to avoid the mechanical nature of its sometimes arbitrary narrative developments. The adrift nature of the piece is for the best; a surfeit of narrative can knock a film like this out at the knees. The Force Awakens never buckles under the weight of expectations primarily because it respects its audience enough to know how weightless all this space opera shenanigans really is. One can pontificate on the terror and trauma and intellectual respectability of The Empire Strikes Back all you want, but you’re still dealing with candy at the core. The Force Awakens, lumpy though it may be, understands that Star Wars is ultimately a flight of fancy, a child with a buoyant imagination enlightening the day by trusting in the simple, reticent myth-making of the stars. Lucas’ prequel trilogy, ever keen on insisting on its book smarts, only managed to enshrine its inadequacies by lighting, and announcing, and podcasting about, the treacherous gap in between its star-bound reach and its ground-level aim. The Force Awakens, in contrast, lets things coast, and in doing so, it occasionally soars.