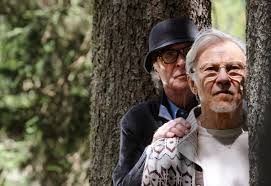 Lensed, as usual, by the incomparable Luca Bigazzi, no one is letting the cat out of the bag by proclaiming that Paolo Sorrentino’s 2015 film Youth is one of the most luxuriant gushers of the year, cinematically speaking. The depth and vigor of the black levels alone are enough to pass out over. Sorrentino’s Fellini fixation is no secret after The Great Beauty was less homage to or commentary on La Dolce Vita than one-ups-man-ship competition with that 1960 film, with Sorrentino’s proverbial digit sometimes waving in Fellini’s face at the resplendent glory of Sorrentino’s own imagery, the breathtaking, cavernous wideness of his frames, and, in his one contribution to the Fellini legacy, the lustrous beauty of his engorged color pigmentation. Call Sorrentino whatever you won’t, but don’t deny that he’s a showstopper.

He’s also a classicist, a fact emphasized not only by his deliberate Fellini references but enshrined in his tricky, admittedly unearned sympathy with classical art forms and his pithy rejection of anything that has entertained an audience in the last half decade or so. The old “let characters luxuriate in your classically alluring framing while also commenting on how trapped by those notions of classical allure” trick is not an easy one, but Youth’s halfhearted evocations of the latter seem almost like back-peddling, or ground covering. His Youth is a septuagenarian buddy film, after all, and his film’s ears perk up whenever he’s enjoying the company of his two elderly stars. When he dissents, as in a scathing mud-caked monologue by Rachel Weisz, who plays the catastrophe-stricken daughter of one of the men, the possibilities for her to take her father to task are endless but curiously sequestered off from the rest of the film. It is as if Sorrentino knows he’s being elitist and wants to do a little damage control without sabotaging the body of his work.

The rest of his film is a fragile, ailing tale of fragile, ailing men immolating in the mud-encrusted malaise of a mountaintop, Alpine resort where fellow wealthy, brittle souls come to pity their seclusion from the world. The two lost souls of our focus are Fred (Michael Caine), a composer who refuses to perform, and Mick (Harvey Keitel), a stunted film director who just can’t finish his final masterpiece, and Sorrentino programmatically basks in their company only to vaguely indict them in the next scene, rinse, and repeat his too careful film’s symphonic allusions.

Moments of genuine critique bubble up, but they are drowned out in the sauna waters of what amounts to a particularly beautiful teen sex comedy, where the teens happen to be in their 70s. If Sorrentino truly wishes to expropriate the adolescence of these men from them, to explore how they never truly grew out of their laddish teenage fixations on women, he spends most of the film indulging in their fantasies as well. A beautiful scene of the two men spying on an elderly couple having sex frames the whole act in a perilously wide shot, alienating and segmenting Caine and Keitel off from the object of their voyeurism in an explicit visual critique of their adolescence. Yet, in another scene, the two gawk at a naked Miss Universe contestant who serves no purpose in the film but to muse for the men; here, Sorrentino’s camera exhibits no such shame at joining the men in their youthful fantasies.

Sorrentino’s women are all left hung out to dry in similar fashion; Weisz’s impassioned monologue feels like an afterthought when the film drowns said monologue, like a diamond receiving a mud bath, in Weisz’s need for daddy’s love amidst her mid-life tumult. Elsewhere, a pop star is a victim of scorn and rue, a grotesque counterpoint to Sorrentino’s undeniable fetish for the prim and proper world of classical music, memorably dusted off in a beautiful harmonizing scene where Caine conducts an elsewhere chaotic tableaux of grass and fellow nature into an impromptu woodland symphony. It’s tempting to comment on how this scene reflects the composer’s increasingly desperate and fragmented grip on reality, but Sorrentino’s film clearly sympathizes with Caine’s genius and even wishes to tip its hat to him for his dominance over the women in passive roles around him. If Sorrentino was a canny enough filmmaker, he might have carefully modulated the frame to suggest how his sympathy with the elderly men is really emblematic of how the foibles of elderly, rich white men hijack our cultural understanding of sympathy.

I suspect, in reality, Sorrentino is a canny enough filmmaker; he simply does empathize primarily with elderly white men. His film sparkles with genuine majesty throughout, and it is never less than a looker even in its most cringe-inducing bits, but something about Sorrentino’s razzle dazzle seems curiously self-congratulatory and detached from real world concerns. Maybe it’s what non-critics so often, and unnecessarily, refer to as “pretentious”, but Youth’s beauty does much less to illuminate the tensions in its characters than to distract us from its lack of interest in illuminating much of anything. Pity that the film is so well-illuminated from a technical standpoint – as an adrenal cocktail of pure cinema, Bigazzi’s lighting is second to none – but only in service of actively avoiding the questions Youth raises. Beauty, as they say, is in the eye of the beholder, but Youth feels beholden to a shameful, out-of-date notion of beauty.