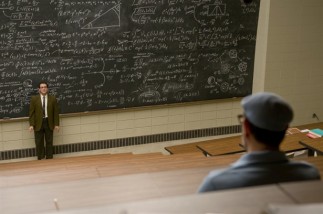 A deceptively sedate but perpetually off-kilter movie, A Serious Man really has a lot going on under its sleeves, even if the characters seem more interested in re-fastening the cuff-links to keep everything  from spilling out. It’s one of the two-headed director’s patented caustic satires of the very mundane oppression of everyday suburban America, only this time without as much salt and vinegar. Yes, A Serious Man is a combative, anxious film, and it takes a perturbed delight in unearthing the daily existential crises of a society that seems to run on wheels to the untrained eye, but it’s also a curiously warm film. Perhaps the Coens had a little bit of humanist fun left in them after 2008’s 60’s caper comedy re-reading Burn After Reading, and they decided to infuse just a smidgen of it into a decidedly brainier, more intellectual stew. Or maybe they just had Jewish guilt on the mind, and needed a little Jewish humor to save their tired souls. Either way, they produced some filmic dynamite, a work as rabidly intellectual as it is lightly feeling and genially flighty. It captures humanity looking the other way and takes a true delight in watching and letting the popcorn fly.

Of course, this is a “Coen Brothers film”, not just a film made by the Coens, which means quite a number of things in a world where the two have so many films under their collective belt.  Mostly, it means it contrasts the picturesque locales of superficial suburbia with the darker, naughtier despair underneath, although this time it has more of a wink on its face than a grimace (it’s easy enough to see their corpus as a smirking take on David Lynch’s fascination with the inner demons of gee-willickers society). The narrative is a proper slice-of-life, as Larry Gropnik (Michael Stuhlbarg), a college physics professor, seemingly a normal, everyday man,  finds his life at a cross-roads (you know, wife leaving him, annoying brother, student bribing him for a grade and then suing him for accepting a bribe, that sort of stuff). Due to all this biz going down, he loses faith in himself and starts asking around for a little advice, finds people who do a poor, half-assed job giving it to him, and then himself reacts half-assedly and with little concern. You know – all in a day’s work.

Visually, A Serious Man isn’t the formalist’s dream many of their earlier films represent. The mise-en-scene and the framing just aren’t as diligent and brimming with detail, but perhaps the less filled-up nature of the film fits with its study of human emptiness and the scrappy, low-key way it seeks to explore that emptiness. The biggest success is the blend of pop-art color saturation and pastel-colored bold flatness they use to depict the soul-sucking artifice of suburbia around Gropnik as an pop-up book entity that knows no complication on the surface, but all manner of troubles deep down below. The directors’ noted uncomfortable close-up also makes more than one appearance, bridging funny, clinical, and tragedy like a day at the races.

A Serious Man is a complex film – a thought piece to rival something Kubrick might produce if he knew a thing or two about humanity (and I say this as a great admirer of his) – but unlike most works of the mind, it is neither cold nor distant. It lives around Larry, not quite with him, but it lies above him only slightly, not quite mocking but more genially poking at him. Unlike some of the pair’s other films, it doesn’t delight in seeing him harm – it’s just not ready to step in and save him when he’s busy flailing around a semblance of life. The “quirk” of it all is simply a means to capture uneasy life torn asunder by the profound nihilist despair of everything around Larry. The dude just can’t get a break, and as the Brothers depict it, life couldn’t give him one if it wanted, for it plays by no rules.

Nevertheless, in typical Coen style, it all concludes with a delicious bit of irony. Having spent the film sitting back and observing a sort of cheery nihilism having its way with Larry, they assert filmic agency at the end. Do they save him? Hardly… they give us a bit of the ol’ righteous indignation, reminding that these directors are above all scientists and experimenters, prodding humanity like so many bugs under a microscope. Like the god they explore in this, their most religious film,  they aren’t afraid to throw down a little overkill, if only to see what would happen. They don’t necessarily want the end they give us in this film, but their personal anxieties won’t let them have it any other way.  Jewish guilt has been at the center of most of their films, and here they make it explicit. The only thing they can do to make it better for Larry is to dole it out with a winking grin rather than a smug one. If that’s not much of a consolation, well, that’s half the point.

Leave it to the Coen Brothers to wryly release their most mainstream film in the trappings of a genre that was at its peak popularity 60 years beforehand. True Grit, a retelling of the novel famous for having birthed the 1969 film of the same name for which John Wayne won as Oscar, is an ornery modern Western that one might expect to be subversive and ironic and hyperbolically if teasingly critical of the classic Westerns dotting the landscape of American dreams. After all, the Coens have a long and cherished history of subversion and irony. But here they do perhaps the most unexpected thing of all: play it straight. True Grit plays like a love letter to the genre more than something looking to tear it a new one.

Of course, there’s a little of the left-field in its bones (it is the Coens we’re talking about). Jeff Bridges’ Rooster Cogburn is a bit on the cantankerous, curmudgeon side to render as a purely traditional Western hero,  and his two sparring partners fair about the same. Matt Damon, as Texas Ranger Labeouf (Texas Ranger might as well be his first name), is a pale-faced comic relief so caught up in his own ego he forgets to actually do his job. And a fantastic turn by newcomer Hailee Steinfeld gives us a weary, tired adult in a child’s body in Mattie Ross, a thoughtful way of challenging the convention that, you know, children are just incorrigible children and the West wasn’t, you know,  a chaotic monstrosity of human decay warped to kill and maim anyone who stepped foot on it.

Thus, the central relationship of the film is of an old, stubborn mule of a lawman who can’t be bothered and a young, world-weary, highly competent girl, a far distance from…ironically…John Wayne, the righteous, masculine white male lawman who saves the day, and the innocent little child unaffected by reality. In turn, the Coen Brothers do maintain some of their trademark subversiveness. Within the trappings of this old-school Western lies something more subtly revisionist. Many of the characters speak not with a hurried immediacy but as if reciting a great play, savoring the lines with theatrical pomp and circumstance in a poke at language and the ways Westerns of old motioned to turn a grimy, nasty time period in US history into something to hold up on a pedestal by fabricating false, mythical airs. There’s a certain “this is all a bit daft” undercurrent to portions of the film, a light-hearted but not necessarily substantial critique of the silliness inherent in old school Westerns. In particular, a great mockery of the Western male can be found in the extent to which Cogburn and Laboeuf are far more interested in stroking each other’s male-dom through snarky quarreling than in actually working with Mattie to save the day.

These subversive notes are accompaniments, however; they aren’t the skeletal structure of the work. The film mostly carves out a niche as a three-character play between the leads, at times approximating the comedy piece of Rio Bravo to name-drop another Wayne film. But it’s far too energetic and lively in its later portions to maintain this lackadaisical, everyday atmosphere (excepting one scene that deliciously mocks the “suspicious traveler riding into town” ethos at the center of the Western hero logic). Eventually, when Mattie does get Rooster to sign-up for bringing to justice her father’s killer (given a ham-fisted, pointedly non-competent, and mockingly broad portrayal by Josh Brolin), things become a little more propulsive. It almost approaches anti-myth, but it’s far too in love with Western lore for the claim to stick. This is a Western’s Western (something we know from the undeniably mythic night-time camerawork from Roger Deakins, which sees the darkness outside less like realism and more like storytelling embellishment painted-on for effect, like a good campfire tale). Its violence is blunt and terse, but the filmmaking behind it is lovely and even poetic in the distinct key of a traditional Western. It is precisely the last thing anyone expected the Coens to make, and make so well at that.

Yet…this also brings us to a larger concern: who has any particular interest in the Coens making a traditional Western anyway? Sure, it’s all fine, efficient filmmaking made to be slick and entertain, but the Coens have never had much interest in “efficient” filmmaking except as a means to destroy our inner psyches and generally explore the nether regions of cinema and the world. There’s a little of this in here, as mentioned, but slight subversions aside, the film is one of their most tepid and typical offerings. These guys cause film-lovers personal pain to get to the cinema, they break down our filmic laws. In this light, and because films do not exist in a vacuum, “a quite nice time at the movies with a little subversion around the edges if you’re looking for it” is a bit of a disappointment. Fun is fun, but the Coens usually approach fun like giddy, neurotic delirium as they re-read the slapstick and the screwball for their deeply nervy cores. Usually they work with genres to explore something more totally unexpected and twisted; here they’re working toward the genre, even when they’re not necessarily working down to it. It’s a bit of a personal thing, for this is an exceedingly well-made film, but this is …dare I say …the Coens at their most middlebrow. Of course, middlebrow Coens is still damn fine filmmaking, and the film, for its lack of substance and deranged stylisms, is certainly entertaining. Ultimately, I suppose, that is all that matters.