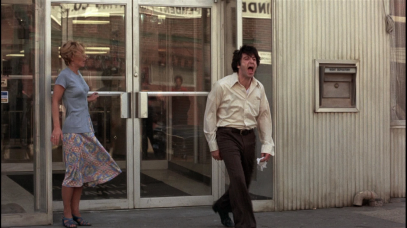 In what is often considered the greatest decade of American cinema, 1975 was perhaps the single greatest year of “American” film. This isn’t to say it produced the “best” films from American production companies – that’s far more open to debate. But 1975 was a year when many filmmakers took their hearts to exploring the then current state of “America” and what it meant to be an American at the time. Among the fresh crop of 75 is Dog Day Afternoon, often undervalued in relation to the other pillars of that year’s Oscar showdown (Jaws was the first American release to hit 100 million dollars box office gross and ushered in a new era of blockbuster filmmaking, One Flew Over the Cuckoo’s Nest would take most of the glory at the Oscars, becoming one of only three films to win the Big Five awards, and Nashville is, well, the greatest and most definitive examination of American life ever made).

But if Dog Day Afternoon is less respected, that’s perhaps only because it insists upon itself with much less regularity. It’s a much smaller film than any of the others, a film that begins inauspiciously and, as the tagline implies, ends with little to no fanfare. But if it seems a two-character study in the guise of a crackerjack thriller, it is. That it also happens to be, in its statement of loneliness even amidst personal and public attention, as strong a commentary on the state of a nation that was increasingly connected by media but was nevertheless perpetually distant, fractured, and alienated from one another – well, that says a whole lot about the potential of two character thrillers.

It’s a piercing summer’s day in 1972. New York is as busy as ever, with people seldom stopping to look at one another in their ever-present movement and chaotic business. Amidst the commotion, two men, Sonny Wortzik (Al Pacino) and Salvatore Naturale (John Cazale) enter the First Brooklyn Savings Bank and attempt to rob it. Everything goes wrong for them – the money has already been picked up for transport and little remains, and to make matters worse the police soon swarm the bank, bringing the media and the public with them. As tensions run high, Sonny and Sal become increasingly nervous, and what could have been a few minutes of their life runs into hours and increasingly seems like the end of it.

Dog Day Afternoon is technically a heist film, but that doesn’t really explain what it sets out to do or what it accomplishes. Firstly, unlike most heist films, success is a chimera (the film is based on a famous true story, and it’s less than interested in denying its nervy, deterministic progression into fatal oblivion). One would think this would sap some tension from the affair, but instead, it lends a deep, thought-provoking nervousness, which we see in Pacino’s weary, buggy eyes, in Sidney Lumet’s sensitive, swampy direction, and in a script that deals with complicated themes in a matter-of-fact manner. As the film progresses, it becomes all too apparent that these two men are in over their heads. They’re not criminals; merely nobodies, driven to crime as a result of poverty and the anxiety we all face about the future.

The most significant, and most immediate, subversive act of the film is to almost immediately break the clichéd cool-customer attitude films tend to take toward bank robbers. We’re immediately aware they have no idea what they’re doing, but the film doesn’t pity them – it mythologizes them in their everyday despair, making them fringe-dwelling figures worthy of a humanist form of pity only insofar as we all are. They sweat, they pace, they question their actions, they make mistakes (the film gives Al Pacino, then becoming a sort of male icon, a profoundly and pointedly “weak” role, insofar as sacrificing his agency and its import throughout). And throughout we’re deeply implicated in their actions by the film’s lingering, quavering camera. Dog Day Afternoon is a profoundly nervy film, one which turns the entire filmic language of respectable, professional, too-cool-for-school criminals on its head and leaves it pinned underneath its own heaving, humid mass of tangled human parts.

Throughout the film, we not only melt in the continually desperate, drawn-out tension between the police and the bank robbers, but we come to see the potential friendships which could grow, in another world, out of the bonding between the captors and the prisoners. Ultimately, the film breaks down the dichotomy between the two as we come to understand that Sonny and Sal have made themselves captors out of the more ossified, all-encompassing prison of daily life; because of this, no matter what they do in the bank, they’re prey to the existential crisis of their own consciousness. Lumet’s treatment of the film elevates the material to a sort of grand chamber piece theater, where human-life plays out in this bank as the world around it stops and spectates, unsure of what’s truly going on. At some level, it’s a study in the consternation and passivity of movie characters rendered prey to their malcontent audience; in the way the film contrast the “on-screen” space outside the bank with secretive, furtive interiors, it suggests that movie characters have lives we never see.

Above all, along with the year’s fellow Oscar contenders One Flew Over the Cuckoo’s Nest and Nashville, Dog Day Afternoon is a perfect representation of the mid ’70s zeitgeist, with nervous humanism shot through with an unflinching cynicism so often equated with the post-Watergate era. It presents a populist vision of people on the edge of society who gain the public’s attention through chants of “Attica”, in reference to larger social unrest, and lose it just as quickly, once it comes out that Sonny is bisexual, and that the reason he chose to rob the bank was to secure money for his partner’s sex-change operation. The film then prefaces Lumet’s more popular Network released the year afterwards as a dissection of the American public and the ways in which they are swayed easily and influenced by sides, the robbers and the police, they don’t really know anything about. In the end, the sense is that to these New Yorkers, crime is theater, a daily occurrence to spice up their lives and get involved in as community, but never to actually care about; they never once bother to explore who the two robbers are or why they might be robbing a bank, nor do they particularly care. They look on in malleable detachment, and are never meaningfully characterized, because their character is that of the spectator on a world around them, never acting, never involving themselves, always remaining passive while others bleed around them.

In contrast to Network though, this social-realist theater piece gaping flesh wound really bleeds people and a deep concern for the connective tissue which binds us. There are wonderfully human moments throughout the film –  not only within the relationship between robbers and hostages that transforms us all into victims, but  in a personal phone conversation between Sonny and his partner Leon, as real as any conversation in any film relationship yet depicted, playing out within the larger tension of the media coverage of the robbery. A subtle moment early on where one robber backs out due to fear and Sonny asks him not to take their one car home also rings with an uncommonly black, Allenesque comedy. If Network was a rampaging, ravaging, fiery, caterwauling mess of an imperfect film, Dog Day Afternoon has a better understanding of human feeling; it doesn’t blame the public for failing to understand anything that goes on around them. It knows, rather, that they are as busy with the unheard malaise of their own lives, that they are all Sonnys and Sals, and that society affords them little opportunity to stop and listen and understand, even when we may want them too.

Ultimately, the film’s narrative is of blue-collar humans on either side pitted against each other by society and unsure of what to do. It’s a film about indecision, existential in its treatment of “what could have been” if only the world had been different. It’s sad and tragic, but pumped up on sheer New York energy and humanity, simultaneously plaintive and pugnacious, an ode to the little people of the city that’s often too busy to stop and look. It’s a great cinematic equalizer of human despair collectively shared but unknowingly so. The greatest victim within is the hope that others might know what we’re experiencing. America’s gaze is placed upon Sonny, and he goes from populist hero to mocked lunatic as a result of a nation looking for an underdog hero but unwilling to commit to truly exploring its own hatreds and tensions. He gets the audience most Americans don’t have. He’s given a world where others could know his pain. But he finds it suffocating and staggering, a hotbed of anxiety boiling over and subsuming the air itself. Even while everyone is watching him, he still remains truly unknown.

Like Robert Altman, Sidney Lumet was not one of the rabble-rousing Hollywood youth of the 1970’s – he’d been directing since the 50’s. But he understood that the times, they were a’ changin, and his forward-thinking style allowed him to marry his work to the spirit of the New Wave he’d been playing around with since the Europeans had been doing it well before-hand (Lumet was coming up when all those hoity-toity Euros were having their way with film language and chopping it to bits). Like Altman, he was able to bridge aspects of classical storytelling with social realist drama in order to produce works both earthily of their time and more abstractly timeless. He’d seen America grow out of one phase and into another, and he was clearly unsure of how to cope with it – tellingly, his films capture both an old man’s aimless malaise and the restless, messy vigor of youth, all bottled up into one and fighting for sense in the world. It is within that tension that these directors found their fascination.

And fittingly, although it deals with fewer characters, Dog Day Afternoon is in many ways a companion piece to Altman’s Nashville, released in the same year. It takes that film’s complicated plethora of characters and shoves them all into one figure trying to come to terms with the world and himself. It’s an uncommonly hypersaturated exploration of pure social chaos –  the tension we feel is as much about the fate of America as Sonny, a man who becomes a false prophet for people who couldn’t realize he was a real prophet all along. Both films are about people watching other people and not really seeing them. But if both are social critiques, they are also profoundly warm odes to human decency and little moments of connection even within a greater soul-sucking despair. They capture people trying and trying until they are so tired the thought of trying becomes a pox itself. And fittingly, they are as much odes to places, New York and Nashville, respectively, as people. We learn, more than anything, that those places aren’t really any different. Both are chaotically full of suffocating human motion, both are oppressively strained for human emotion, and in the minds of day-to-day livers everywhere, they’re just stages for another day in the life.