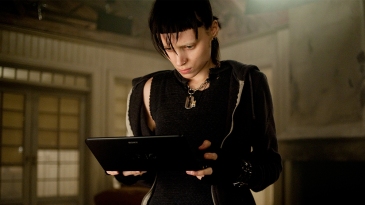 This post being in honor of the upcoming release of David Fincher’s Gone Girl, his most recent descent into the slickly sick world of  melding the realm of decaying and grotesque pulp fiction with the middlebrow machinations of Oscarbait.

It’s a prime irony that a director birthed in the mucky slums of trashy genre cinema took on a book that deals almost exclusively in the lurid kitsch of BDSM, self-hate, melodrama, and open-faced pulpy eccentricity and, of all things, he produced something that feels amorphously like it desperately wants to be an Oscar film. Somewhere along the way, David Fincher became a famous big-budget director and, one year after achieving true greatness with The Social Network, success got to his head, and he forgot that deconstructing journalistic identity, vis a vis Zodiac,  and directing a glossy exploitation film are two different things.

That Fincher does not approach this film as he did his less prestigious, more youthful earlier films isn’t to say he doesn’t resort to his old tricks in his adaptation of Stieg Larsson’s The Girl with the Dragon Tattoo– quite the contrary, in fact. The film has a surfeit of atmosphere, most of which is the result of Fincher’s eye as well as prime contributions by his cinematographer Jeff Cronenweth (who achieves the task of making the ever-present snow almost ungodly in its crushing weight) and editors Kirk Baxter and Angus Wall. His window-dressing keeps everything reasonably entertaining, yes, but it also makes the film a rather clinical exercise in intellectual shot-spotting. After a deliriously warped, manic Judas Priest cover of an opening two minutes,  the film mutates into a stodgy pile-on of plot exposition with no real energetic pizzaz and feeling. And the film mostly sticks to these tracks like a tremendously dogged train with no sense of direction or the ability to admit failure and correct course. The opening credits are the best two minutes of the film (set to a metallic, thrashing, lashing, unnerved, and frayed version of the proto-punk “Immigrant Song”, here by Trent Reznor and Karen O, that burrows into our minds like nails on a chalkboard). But while this opening scene positively hurtles along on a pure punk blast of energy, the rest of the film is turgid and cleanly manicured to within an inch of its life, like a grindhouse film scrubbed of any mess and turned into just a grind.

At which point I should at least exert a few sentences of effort on the narrative, so they tell me. Well, the film is the story of two characters, Mikael Blomkvist (Daniel Craig) and Lisbeth Salander (Rooney Mara). Blomkvist is the owner of the respected Millennium magazine and currently unsure of a future after losing a libel case against a respected Swedish businessman. Soon enough, however, he’s greeted with an offer to investigate the long-ago disappearance of business magnate Henrik Vagner’s (Christopher Plummer) grand-niece for pointedly vague reasons. The reward? Incriminating pictures of the businessman who’s potentially cost Blomkvist a future.

Salander meanwhile is a genius computer hacker who lives the life of a loner and primarily refuses human contact. Her misfortune is not entirely self-imposed; she’s lived a life of discrimination and pain brought on not only by specific men who have hurt and abused her but a system of male privilege weighing her down. Her troubled life has made her a shut-in struggling to survive her own way – she adopts a goth look as part of her identity – rather than according to society’s demands. That she is well-known for her investigative and hacking work to a few potentially high-paying clients, including Vagner (who recruits her initially to perform a background check on Blomkvist before he is hired), brings her immediate monetary opportunities. But it also forces her to answer to the whims of successful men like those who have abused her in the past, and to work uneasily with a society she shuns. Naturally, being that they are both investigators of a kind, and outsiders to the Vagner family’s dark secrets, Blomkvist and Salander suspect something much darker brewing within their client’s family, encounter one another and, to not reveal any specific details, get to work.

Certainly, Rooney Mara effuses a wonderfully droll energy as the titular anti-femme-fatale Lisbeth Salander and Daniel Craig adds a shocking amount of depth to the bruised and battered journalist-turned-detective Blomkvist, and their interplay is stinging and heart-wrenchingly self-hating. Yet, the film forgets this core (and the fact that, really, the relationship is as much one of melodramatic exploitation as it is one of human insight) for most of its first hour and a good portion of its second – it’s far too concerned with a tepid mystery story and not enough with character or angry, enraged style.

Perhaps the most obvious reflection of the tone-and-subject mismatch is the film’s treatment of Salander. Put simply, Fincher thinks she’s a character of great nuance when the script (which is reportedly very faithful to the book) fills her in as a construct, not an empathetic exploration of a real woman struggling with the real world, as much as she is an iconographic, comic-book-y totem to “girl power” hoisted up by a toolkit of BDSM exploitation. In other words, she’s an icy, viciously inhuman femme fatale treated, unlike most femme fatales, not as a man-killer but as a righteous avenger pushing back against the men who’ve done her wrong. This is all well and good, and it could be a subversive act, but it doesn’t make her a three-dimensional human character – she’s a punk rawk messiah hell-bent on deriving tacky enjoyment in the reader/ viewer, a B-movie character at heart.

In another world, this type of portrayal could have been a wonderful, and even wonderfully dangerous, thing. B-movies have their place in society – they speak to things often left unspoken in complicated, curious ways. A B-movie about Salander could have had much to say about her as an image, and, above all, it could have done the near unthinkable by actually legitimizing a woman doing violence to men in genre fare. In other words, the film could have fought fire with fire by taking the male gaze, and the cheerfully uncomplicated violence of the films this gaze produces, and turning it back on itself, creating a film just as uproarious and dangerous but with an agitated female set upon men.

What this would have said politically and socially is a much more complicated question, but it would be potent, provocative cinema.  But rather than following the film’s subject matter down this rabbit hole, Fincher sacrifices some of the torn-and-frayed appeal of Salander’s empowerment (which Fincher in particular could have done wonders with if he hadn’t backed away) for a more meditative style that nothing in the screenplay can back up. His often-embalmed, dour film-making tries to add all manner of icy insight and psychological complexity to the material, but it has the effect of accentuating how empty it is while donning a false aura of the exalted.

Added to this, we have the fact that the film’s mystery story is sort of a mess, and the last thirty-or-so minutes flail around pointlessly and with little impact. Simply put, the mystery “ends” approximately thirty minutes before the film does, and Fincher (like, as I’m told, Larsson) can find not one compelling way to pass this time other than to continue pretending his film has a depth it fails to achieve (Good god, this is a story that isn’t comfortable with only centering BDSM and must look toward Nazism for further grisly, lurid entertainment – material that may make a fantastic midnight movie, but not a sedate work of thematic depth). Meanwhile, the actual mystery resolution is, with no overstatement, tremendously un-fulfilling on multiple levels – it comes and goes almost as if another red herring the film forgot to inform us was a lie.

All of this adds up to a film that is still, admittedly, often entertaining and generally exceedingly well-made (as mentioned, the editing and cinematography are terrific, as is the score which follows along on the strengths of the opening song by giving us angular, rattled instrumentation and synthy shrieks). But it is well-made not only for all the wrong reasons but seemingly against itself. It looks like Fincher didn’t take his first detective story about the seven deadly sins to heart; he’s been too busy lusting after Oscar glory when he ought not. And we all remember what happens to those who lust…