Of course Welles the poster-boy wunderkind of Hollywood splendor, given full control over the powers that be to unleash his vision on the world, could release a masterpiece. Citizen Kane, Welles’ first film, and the first of many to serve as parables of his own brilliance and folly, was practically bred to be a work of unparalleled craft. It was almost an ordained masterpiece from its very inception; Welles had the hounds of Hollywood at his feet. An achievement, sure. But with Othello, he unfolded a masterpiece in piece-meal fashion, without anyone’s help, desperately working to clot the blood of a film barely stapled together with odds and ends over years of stilted, stuttery production. Nothing more could showcase the singular auteurism, the singular genius, and the singular madness of Orson Welles. This film is his ultimate statement of “my way or the highway” determination.  END_OF_DOCUMENT_TOKEN_TO_BE_REPLACED 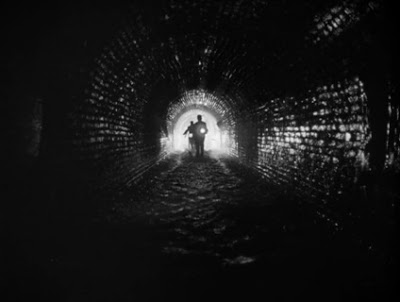 You’ ve probably heard the soul-sick story before. A no-nonsense hero distanced from society and searching for a job finds, instead, the diabolical underside of a grim society rendered like nightmare. Here, he’s played by Joseph Cotton and his name is Holly Martins, a pulp writer who’s been offered a job by his childhood friend Harry Lime (Orson Welles) in war-torn Vienna. When he gets there he finds that Lime is dead and he takes more interest in Lime’s girlfriend, Anna Schmidt (Alida Valli), who may or may not know more about Lime’s supposed death than she is letting on. Martins, almost on cue, begins to question anything and everything, only to wonder whether his questioning was best for anyone. END_OF_DOCUMENT_TOKEN_TO_BE_REPLACED

Update 2018: Touch of Evil’s introduction is still genius, a blurring of perspectives and races as the camera recklessly unfurls itself across porous national and moral boundaries, ambivalently flaunting its ability to contest America’s certainty about racial and national borders even as it questions its own ability as cinema to escape those borders. When the bomb blows up, prematurely concluding and interrupting an interracial kiss, the film confronts the moral, legal, and visual limits of its time-period and quite literally explodes in attempting to find a way out. What a way for Welles to return to the nation that abandoned him, and that he abandoned.

Released in 1958 on the eve of the barren no man’s land that was Hollywood cinema during the first half of the ’60s (before the ’70s would give it the caustic, cynical kick it needed to revitalize itself), it’s fitting that Touch of Evil is usually considered the final classic-period film noir. As if sensing the decay of the Hollywood system and its inevitable decline for its conservative rigidity, Orson Welles must have sought to bring the house down by making the ultimate film in one of its premier genres (Welles, to be fair, had not only seen this coming but had initiated its eventual arrival twenty years before when he gave the studio system its definitive film and by definition made every passing year for Hollywood an unsuccessful attempt to surpass this benchmark). And “ultimate” film noir here doesn’t so much mean the greatest or best film noir, although it comes close.  It implies instead that this film is the ultimate example of noir, or the most film noirish noir ever –  it plays like Welles read the genre past itself, distilled it to its core, and expanded those elements to their extreme. Everything –  from the caustic characters to the cavernous nightmarish despair to the eternal worthlessness of human nature to the implicit racial subtext to the concern over obsession, control, and power –  that constructed the noir as a genre is on display here and rendered more nihilistic than perhaps ever before. END_OF_DOCUMENT_TOKEN_TO_BE_REPLACED