The Wolf of Wall Street

Martin Scorsese’s 2013 quasi-biopic of American greed and self-destruction in the ’90s has a number of very notable factors acting in its favor. Primarily, it has Martin Scorsese really just tearing up the cinematic joint. Here, he’s a cavalier madman again, a persona he hasn’t adopted in a long while. The Wolf of Wall Street is less interested in telling a narrative than in expounding upon destructive impulses and raw propulsion, and the fact that the film adopts the disorderly persona of its main characters is almost categorically a civic good.

Secondly, Leonardo DiCaprio throws himself into the role of Jordan Belfort, the early ’90s capitalist fat-cat du jour, like a deranged madman – as a performance the closet thing it approximates is loose-limbed, improvisational jazz, and it’s a stunning display of pure physicality and cognitively-dissonant charisma. This too is of no small import, as he’s the center of the film. The Wolf of Wall Street is touted by many as a “film about us”, and that’s true in the sense of its emphasis on American debauchery and inequality more prevalent today than in the ’90s the film depicts. But it is also a film uniquely about Jordan Belfort, a singular man who could convince just about anyone to follow him, and who is depicted less as a villain or a conflicted person than a living “performance” of a human being, having no inside core other than to perform his wealth. The film’s attitude toward him is mocking, yes, but it also undeniably sees his charisma for the undeniable appeal it breeds. END_OF_DOCUMENT_TOKEN_TO_BE_REPLACED 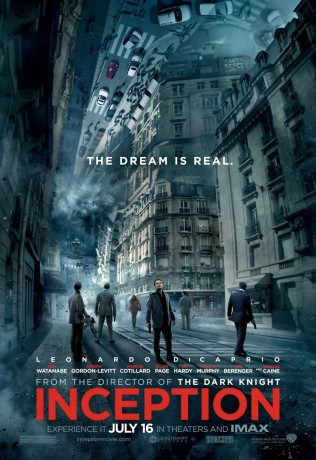 Inception, as of 2014 still one of the most advertised and anticipated before release movies of the 2010s thus far, wants to be a lot of things: a dramatic thriller, a cautionary tale, something that pokes and prods around without knowing what it’s looking for, an action movie, a head-trip, and, of course, a dark science fiction film. If that all seems like more of a daring work of danger than the film actually is, you’re excused. Inception is somewhat self-consciously confusing, but more to the point, it’s actually not nearly as complicated as it wants to be. Maybe that’s for the best. What we’re left with is a relatively straightforward (good)action movie with science fiction trappings that mostly uses its hook as a way to mess around with the audience and to convey that puzzle-box intellect-before-emotion mood today’s audiences lap up, especially when the box comes with a little warranty sticker on the back that tells you to ship it back to Christopher Nolan Inc. if you think it’s broken.

Inception is a nice time at the movies, but one gets the sense Nolan bit off more than he could chew. It is simultaneously less and more than it needed to be, trying too many things and not doing any of them truly well enough to catapault it into that special rung of science fiction filmmaking that causes us to look back onto ourselves and question why. Rather than going for a fun, intense dynamite pure adrenaline-fix, or an intellectual dissection of its preferred topic of choice, dreams, or an emotionally-driven character-based drama in a science fiction setting, it tries to do all three. In doing so it ends up being only decent at any one of them. One gets the sense that the post-movie discussion is more interesting (and more honest) than the film itself.