Beauty comes in all shapes and sizes, they say, but seldom has a film been so accidentally beautiful as Akira Kurosawa’s final epic of the cinema. Nearing his ’80s, the ever-productive Kurosawa could no longer see across the great distances required to aim a camera at the monumental swaths of chaos and order he wished to assemble and unleash in front of the camera. Functionally, in essence, he couldn’t direct the film he wanted to, but that didn’t stop him, nor did it hamstring him.

END_OF_DOCUMENT_TOKEN_TO_BE_REPLACED 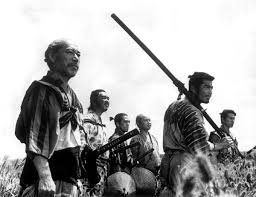 Akira Kurosawa came to Seven Samurai at a flux, but the ripples of his magnificent cultural clash are still felt today. Birthed on a long line of films seeking a sort of safety in cultural traditionalism, he’d by 1950 established a certain formal rigidity in his films to befit this traditionalism that he extended into the stratosphere and elevated to high art. But Seven Samurai was him flexing his muscles, and his attitude toward the world, in a bid to implicitly challenge the culture he’d grown with, even as he naturally upheld that culture all the same. In its own way, Seven Samurai saw him growing, bending, and testing the limits of the Japanese samurai film. It also saw him feeling the ensuing pain and cognitive dissonance of his actions, not unlike Western films like The Searchers and High Noon for American cinema around this time. But while those films saw America grappling with its fundamental lie, that of individual freedom and fluid class boundaries, Seven Samurai saw Kurosawa tackle the mid-century Japanese focus on static class boundaries by adding a dose of new-found fluidity and freedom to his formally composed camerawork, and to his strong, silent characters. Like those films, Seven Samurai is caught in its own dissonance, radicalizing even as it remains resolutely traditional to the point of fable– but here it’s a fable of a nation coming to terms with itself.