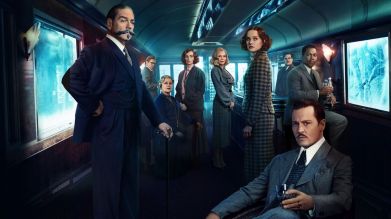 Director Sidney Lumet’s Murder on the Orient Express is little more than a palate cleanser, a film-length hangout-sesh with various actors dropping in to bide time with Lumet while he’s stuck between his point of origin, his scintillating 1972 Serpico, and his destination, the sun-scorched, swelteringly humid Dog Day Afternoon from 1975. In the latter film, every drop of sweat hitting the ground both stems from the pours of and falls into the cracks of a deeply torpid, entirely exhausted post-civil-rights, post-dream America just waiting for a 12 hour news story both to shock itself back to attention and to distract it even more. That’s a real masterpiece, and Serpico is a quiet near-masterpiece as well. The middle passage film, Orient Express, is a  lark, a nice way to spend a couple of hours, but don’t miss any sleep over not seeing it, unless you have a fetish for showpiece ensembles coasting on their fame. (I mean, who doesn’t?)

In the 2017 version of Agatha Christie’s tale, Kenneth Branagh’s cast isn’t quite as awe-inspiringly epochal as Lumet’s – impressive as Michelle Pfeiffer, Penelope Cruz, Willem Dafoe, and even Branagh can be on a good day – so you’d think Branagh as a director and a writer would have to work a little harder to pick up the slack? In point of fact, he does work harder on two fronts, neither of them to the film’s inarguable benefit. While the basic outline is the same – the world’s most famous detective is trapped on a train with a dead man and twelve possible suspects, all of whom increasingly wilt to reveal clandestine connections to the victim – Branagh doubles down on expressive melodrama and even showier visuals, each an equivocal addition at best.

But Branagh, never anything less than willing to gift himself a choice role, also dons the famous mustache and the accent, so we can start there. In place of Finney’s prickly, obstreperous, bourgeois parody of Continental Europe, Branagh offers a conundrum: a silly interpretation that is, in turn, interpreted well. On “mishandled interpretation,” The script’s idea of a replacing Finney’s (and  Christie’s) dispassionate, almost cruelly mechanical ice with compassion masquerades as a plea for human warmth, but it ultimately does little to deepen the film. It’s a way to win over easily-alienated audiences, to make them like Poirot, a method of looking beneath the mustache and into the soul. A mustache which, on its own terms, is as signally a marker of this film’s intentions as any: while Finney’s was crisp, pointed, a little acrid, Branagh’s is full-bodied, voluptuous, welcoming. It’s a fuzzy blanket to wrap oneself in when confronted by a most unbecoming winter.

But in a harsher, more contemplative film – or rather, a film aware that one can contemplate without stopping every minute to wax poetic about emotions –  the stache could have been a shield of sorts, a way for a darker, less humbled Poirot to hide himself from the elements, much as he shuns any form of human contact he cannot control. In place of a murderously fastidious, anal harbinger of supreme competency frightened at the possibility of disorder in the world, Christie’s original construction, we have in Branagh’s Poirot a genial and caring old fellow with an avuncular demeanor. The problem, and what Branagh’s melodramatic timbre does not comprehend, is that addition can come through subtraction; we can learn more, and more worth learning, about Poirot when the film doesn’t try to teach us anything. The less human depth, the more the film embodies the spirit of a man deathly afraid of human depth beyond that which he can calculate. This new Poirot reveals more; he questions himself, doubts himself, connects to the other passengers, invites them, and us, to feel compassion for his moral quandary. But in doing so, the film reduces him to a mere “complicated character” rather than a man whose seeming simplicity hints multitudes about a character almost forcibly turning himself into a plot-mechanic, a perfect sleuthing automaton defined by a tragic sublimation of personality to the details of the case.

So that covers “mishandled interpretation”. Now, “interpreted well”. Accepting the decision of writer Michael Green (having a bizarrely productive year after writing Logan, Blade Runner 2049, and this after having only written one prior film, 2011’s misfire The Green Lantern), Branagh the actor dons the mustache reasonably well, as does everyone else in the film. No one is exactly playing above the page. In fact, Johnny Depp, ghosting in as the murdered man for a few drinks, is somewhat inspiringly playing down to it as a collection of cheerfully stupid ‘30s movie clichés. But everyone makes for pleasurable company. However, Branagh sabotages himself and his cast in his stranded attempts to surpass – or at least differ from – the text of origin, which he is mostly content to pay sycophant to throughout. We get the same avalanche of clues, the same rotating primary-suspect, the same moral dilemma. But whenever Branagh takes things off the page, and out of the train, he throws in a sub-blockbuster set piece meant to shore up this film’s “entertainment for adults” credentials, all of which amount to subtraction by addition.

A few pat-liberal statements about racial equity aside, the screenplay is mostly playing by the books until the final revelation when – without altering the facts themselves – Branagh indulges in a deliriously awful reading of the film’s “moral conundrum”. Branagh treats Poirot’s ultimate decision not as a matter of fact, as in the original version, but as a soul-destroying dilemma. In and of itself, there’s some space for ruminating in the tight tale, but Branagh weighs the scene down like a freshman performing Shakespeare, resting on a cringe-inducing score and a few especially saccharine flashbacks to choke the moment with its own solemn importance. Lumet’s staging of the material was substantially less dramatic and thus more effective – more of a reflection of a deadened detective, less insistent about its own pomposity – but Branagh’s famously hubristic fog around himself does him no favors and dies hard. He’s giving himself, and his film, a moment, and it clots what goodwill the film had built up.

The question of hubris is one the film cannot overcome, let alone escape. Consider the much-vaunted 65mm lensing which not only stands at odds with the claustrophobic interiors of the film but adds little to the exterior snow-scapes beyond a vague prestige factor. (Flaws aside, at least Tarantino’s Hateful Eight mobilized its 70mm stock to turn Wyoming tundra into a meditative negative space, an allegorical hell where America’s perennial fears, foibles, anxieties, and fetishes turn up out of the blue to play, fester, punish, and ultimately perish). But that’s the issue with Murder on the Orient Express: every flaw is a presence, a calculated decision – a lazily calculated decision, but calculated nonetheless – rather than simply an absence. There’s an unmistakable aura of practiced cunning and importance to the entire affair that only steadily mounts as the feature progresses. Even the potentially interesting additions – interiors lensed as fractured-mirror kaleidoscopes where the dissolution of truth and certainty manifest in the rupture of the lensing – are slathered on indifferently rather than intelligently. A few delectable frissons aside, it’s about as neutral, and neutered, a film as you can imagine.