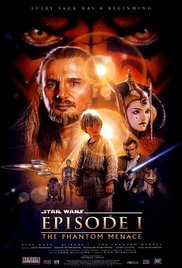 As opposed to an abject failure of imagination, design, or cinema more broadly, Star Wars: The Phantom Menace suffers a more equivocal, ambiguous form of misfortune, the kind of flaw that is also signally exciting and valuable in its own right: it suffers deeply from 16 years of franchise-creator George Lucas stewing on his ideas. With The Phantom Menace, the lower rungs of his imagination inflated to the point of boiling over with a desperate need to prove his mettle as an author by complicating and nuancing the concept for Star Wars without actually having a grasp on, or paying attention to, the actual execution, the very cinema, of his ideas. Everyone loves to hate on the thing, slathering it in such a smothering aura of empty incompetence that the criticism seems not only unfair but essentially arbitrary. In point of fact, the film is often anything but empty, and its surfeit of under-baked ideas – exciting to a point – are also its comeuppance. The totalizing way everyone demonizes the thing like it’s a leper unable to scrutinized up close asphyxiates not only the filigrees of glee inhabiting the film from time to time but its more legitimate offenses as well.

The dominant vulnerability at the core of The Phantom Menace is that the script is a confusing and tonally-manic mélange of the too-lighthearted and the unnecessarily-dour. It is a two-faced Janus head of a film torn betwixt a desire to entertain children and to articulate Lucas’ pseudo-sophisticated, almost pedagogic (and yet still somewhat under-explained) asides to tax regulation and formal political maneuvering. You have not known cognitive dissonance until you’ve experienced a stuffy, lethargic monologue about republican democracy thirty seconds after being subjected to Jar Jar Binks flubbing around donning a Minstrel Mask. Obviously, George Lucas seems to be pretending this is a real screenplay worthy of articulate consideration, which is sometimes no less substantive a problem than the more commonly mocked childishness of Binks and other features. Conceited self-importance, an over-reliance on a facsimile of awareness and intelligence, is no less a marker of adolescence.

Thus, the biggest concern of the film is that the concept is a mouthful, and Lucas has little idea how to wrangle the competing tonalities into submission or a semblance of coherence. With the privilege of abstraction, I’ll simply note that the basic thrust of the thing has to do with a Galactic Trade Federation trying to muscle in on the Galactic Senate’s comparatively-humane control of the galaxy while an insidious Senator from Planet Naboo named Palpatine (Ian McDiarmid, and we all where this goes) aligned with the Trade Federation convinces the young queen from Naboo named Padme Amidala (Natalie Portman) to reshuffle power in the Senate, unknowingly-to-her giving him temporary control over the whole body. Things go awry from there.

Also, since the whole Trade Federation and Galactic Separatists’ business is essentially diminished to a ruse by Emperor Palpatine to gain power, Lucas’ will to entertain questions of governance or the ambivalences of interstellar governance as well as legitimate differences in desire and need between various organizations of people – questions which the script theoretically hinges on – amount to a façade. The whole thing is one giant ploy by Palpatine, making the script’s refusal to accept its pulpy sci-fi opera origins feel not like an artful venture  or treacherous undertaking into the swamps of moral relativism and serious introspection but an artless and ultimately inelegant, over-confident belief in its own ability to effuse ethical quandary. Lucas is by all accounts a genuine soul rather than an ambitious huckster, so it may be that he truly believes in the intellectual value of his screenplay rather than merely donning the hat of social issues in order to falsely inflate his film with middlebrow value. But just because Lucas believes it doesn’t make it better.  Whenever questions of trade are on the mind, the film barrels completely out of control into adverse, strange corners of “thoughtful cinema” that Lucas is absolutely not ready to deal with.

And, as you do not need me to tell you, things go particularly askew whenever young Jake Lloyd is on screen as Anakin Skywalker, the young boy the two Jedi  –  Qui-Gon Jinn (Liam Neeson) and his protégé Obi-Wan Kenobi (Ewan McGregor) –  who get mixed up in all this believe to be the future of the light side of the force. (We all know where this goes, and the next two films will tell us the actual story of how it goes there, rather than this obvious-prelude-cum-tech-demo). Certainly, Lloyd is the movie’s Achilles heel, the astonishingly racist Binks character aside. (If we accept the idea of a sci-fi allegory, we must also admit that sci-fi can displace hidden but horrifyingly oppressive norms onto the screen too, even unthinkingly). But it isn’t as though Lloyd’s vacuum itself exists in a vacuum. Portman is almost definitively plumbing equal lows of choked inability, while Neeson and McGregor mostly seem dispassionate about the whole affair. Lucas’ infamously, incomparably inept actor-directing also hinders even the notoriously charismatic Sam Jackson in little more than a cameo.

Only Ian McDiarmid, reprising his role from Return of the Jedi in addition to playing that character’s alter ego here as well, survives dialogue that is both blitzkrieg and slow-acting-poison, each line awful in the moment while also amassing a leviathan-esque force over the long-haul of the film. For someone viewing the film as their first Star Wars, the whole affair has the internal incoherence and abstract, narrative-adjacent quality of an avant-garde film.

At the same time, the film’s ardent critics who primarily point to structure and dialogue as the film’s central miscalculations, beyond obviously having forgotten or otherwise taken a nap during Return of the Jedi, plainly if temporarily rescind their understanding of cinema as a visual art and a dexterous and sometimes radiant interplay of cinematographic and production superlatives. These reviewers conveniently bracket not only the failures of the original trilogy but the successes here. Namely, they overlook the ennobled magnificence of the final half hour, the ricocheting majesty of the mid-film pod race, the foreboding atmosphere of the opening. All of these and a handful of select moments and stranded images where everything ticks may seem inconsequential, but they amount to nearly half a film all things considered. Plus, that final lightsaber battle really purrs, and John William’s best composition of the last 20 years, the scintillating “Duel of the Fates”, is breathing down the neck of even “Binary Sunset” from the original Star Wars for best song from the whole franchise. The film’s sheer cinematic confidence sometimes outflanks its asinine screenplay.

In short, Lucas’ eye for alternately histrionic and understated visual majesty is no less convincing here than it was in the original Star Wars. There’s obviously a wonderful personal notebook on display here, the fruits of many a year of Lucas exploring visual designs and stretching the laws of realism in exciting ways and to inventive purposes. Much of this notebook has even been transmitted to cinema; I suppose that isn’t actually a thing we should be defending a film for rather than simply presuming it should be the factual basis for a film existing. But we’re grading on a minor curve here; too many films play like dramatic table-reads, as though they’ve been transplanted without alteration from the screenplay. True, this screenplay is an abnormally insufferable one. (And then, and even then, the screenplay has nothing on Episode II for mouth-agape levels of structural awfulness or Episode III for mouth-agape levels of structural awfulness that is also somewhat intoxicatingly adventurous. So there’s that.) So it isn’t a good film, but forgive me for suggesting that Lucas’ folly can occasionally be our fancy.