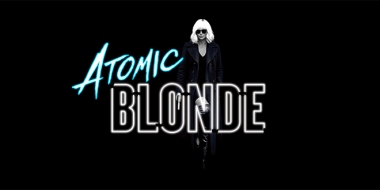 Atomic Blonde’s director, David Leitch, is the now-credited ghostly second-director on the original John Wick, but if Atomic Blonde is evidence, he was anything but a phantom limb. If John Wick 2 took John Wick, steel-forged its core and galvanized it in added layers of classical, tactically ornate imagery, Atomic Blonde rains down post-punk shards, showing off its reptilian physique, a frigid tempo, and a temperature that explodes the membrane between hot and cold altogether. Atomic Blonde is Wick 2’s sister film, hardly out of the family. It’s not exactly that it’s an opposition or alternate future for the Wick franchise, but it is dirtier, grimier, like it’s been dusted off of skid-row after a weekend bender and is walking around in perpetual hangover.

It’s a woozier film, a speedball take on the steel-blue impressionism of Michael Mann – all the better to kill you with – that feels less pretentious (although Wick’s pretensions are part of its appeal) and slightly less precise, judicious, less perfectly-etched for maximum impact and trimness. So if Atomic Blonde has had one too many drinks, the zigzagging quality and its relative lack of straight lines to travel is exactly its appeal. It’s a more imperfect film than either Wick creation, but that’s to its thematic benefit. It radiates its own vibes that advertise the dangers of finding your way in a rat’s nest of paranoia, rather than simply having to avoid the snakes on the way to your already-known destination. With that, it should be a mess.

It’s certainly well that Atomic Blonde struts the catwalk of Berlin with gusto, panache, and tightly-coiled intensity, because it has a walk, a dogged trudge, and a slog to wade through in theory. Kurt Johnstad’s screenplay, adapted from the minimalistic graphic novel “The Coldest City”, is anything but minimalistic, working as if its life goal was to take the infamously tangled screenplay for noir classic The Big Sleep and adding in extra helpings of string and rope. As far as I can tell, our focus is a British secret agent, Lorraine Broughton (Charlize Theron), in Berlin in 1989 against the backdrop of the fall of the Soviet Union and the attendant collapse of the Berlin Wall. Paranoia and oppression hanging overhead, she is tasked with retrieving a list that includes the name of Western spies active deep in Soviet territory. Intercut with an after-the-fact conversation with the CIA’s Emmett Kurzfeld (John Goodman) and MI6’s Eric Gray (Toby Jones), she recounts the story of how British agent David Percival (James McAvoy) helped and very much didn’t help her, and how she briefly had a fling with French agent Delphine Lasalle (Sofia Boutella).

Atomic Blonde is far more narratively dubious than that. I’m not entirely sure I could explain it all, and that’s probably not to its benefit; a pointillist, modernist view of subjective perspectives and the dubiousness of imagery, this is not, so the confusion in the narrative doesn’t exactly entertain any new thoughts on the liquid, fluctuating nature of modernity or truth. But narrative is merely an organ and not a skeletal structure here, even when the film mistakes itself by doubling down on plot machinations that are destined (doomed?) to amount to nothing. What Atomic Blonde really is? A feature-length David Bowie music video with the dearly-deceased master of androgyny replaced with Charlize Theron, in a mid-career turn on her way to action stardom that may or may not pan out, but reaps indelible fruit for the second time after Mad Max: Fury Road.

Theron’s performance is a study in embodiment, characterization defined through physical architecture of our bodies rather than our voices or dialogue. She struts like a Terminatrix though Berlin as though she owns the city – or at least, is a liquid-metal extension of it, given a face and limbs to prowl through its own street-intestines and toxic underbelly. Theron’s stone-cold reticence extends to her diamond-sculpted face, around which a mysterious shroud naturally weaves itself, radiating an intense glow of subterfuge and nothingness. It gives off nothing, holding itself at bay, knowing it needs no expression beyond the sheer, inexplicable fact of its presence. To paraphrase Zora Neale Hurston, she makes a killing tool out of a stare.

The film also mounts a full-frontal assault around Theron. After raising himself out of a cage of infected cinematic dogs (truly, his earlier films are … dubious) with John Wick, cinematographer Jonathan Sela trades in tinted teal, mangled magenta, and blasted blue, but they’re all blood-red hues in this film. Summer films are generally shiny creatures. But Atomic Blonde is slimy, promiscuously threading colors together and mixing gutter-culled post-industrial grottiness with its diametrical opposite of spotless, impeccable beauty, proving that neither is alone in the fight to return style to art-action cinema.

Compared to either John Wick film, Atomic Blonde seems slightly like a work of cinematic stock-taking – retracing the past – than rocketing into the future. For all its harshly fashionable, sophisticated gloom, it feels a little too taken with its poise, pausing to reference and rhyme with other films where John Wick radiated a singular debonair cultivation out of its pores. Atomic Blonde works just slightly too hard to convince us of its urbanity, its ruffled cosmopolitan attitude, and its awareness of the French cinema-du-look action school. It is an eminently classy vehicle and an alternately smooth and brutal, bumpy ride, but it also feels like someone rubbed off the VIN number that says “from the film factory of Luc Besson”, a style which casts a long shadow over the film.

I’m not even entirely sure I can clarify the difference between Wick’s and Atomic Blonde’s relative qualities. For all Wick’s sensory intoxicants, something about its charismatic sangfroid feels intangible, a presence in the air, a feeling in the gut. John Wick is its own artifact, shimmering with destructive possibilities and germinating its own entire galaxy of looks and feels, while Atomic Blonde is relatively contaminated by its desire to exist in the known world, to feel like a pre-existing object simply given a new lease on life. It’s great, or at least very good, but it could have been revelatory. It is without any doubt that it has at least a quorum of evocative scenes, and while the net quotient of them is sometimes less than the stunning parts, let no one say Atomic Blonde isn’t invigorating cinema.