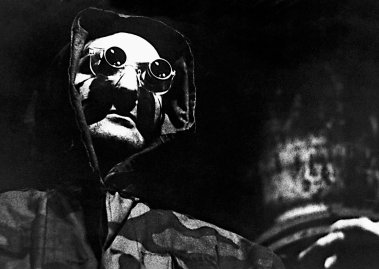 Recast as a fair-weather Hollywood rebel with Terry Gilliam’s 12 Monkeys – breaking the rules only just enough to accrue a superficial glaze of strangeness – Chris Marker’s La Jetee is the real deal. It’s as aesthetically radical as any film this side of, well, Hiroshima, Mon Amour three years earlier, at least, but La Jetee was released in the most aesthetically radical period of cinema ever, so “as (blank) as any film since (blank)” has the misfortune of not really working here. Marker’s short-film is an elegy for the cohesive illusion of time as a passive process, as an unalienable fact to be perceived identically by all and regurgitated out by scores of films more or less in unison. Most films grant themselves safe passage to erase time, to treat time as a background specter to be shocked into corporeality when a film needs to increase its own stakes via a ticking clock bomb or parallel editing that expands time to increase suspense. Films escape time, essentially, and they ask us to escape with them; they whisk us away, projecting a parallel universe where the events of the world are liberated from death, from age, from vulnerability to the physical realm, to the material reality that conditions their own existence.

The protagonist of Marker’s film is a vagabond traveler from a postwar Parisian hell tasked with travelling to the past in hope of discovering an energy source that can power his atomically-ravaged future society. His conduit for travel is a memory permanently but not necessarily accurately etched into his mental architecture, a whisper of a moment visualizing a murder he witnessed at an airport back in the pre-war days. 12 Monkeys limns this much, and only this much, from Marker’s film. Yet if Gilliam’s work imagines time-travel as a possibly traumatic whim for his film to engage with if as a conditioning device for an adequate but unspectacular ‘90s thriller, time-travel in La Jetee is not a practice of choice – a subject to be engaged in willingly by a film, to be invited. For La Jetee, the past is not only immanently addressed in all films – which are definitionally simulacra of a world once filmed and now represented – but perhaps the essence of all cinema. If 12 Monkeys is a science-fiction film in the conventional “narrative dressed up in technical mumbo-jumbo” sense, La Jetee is a trip of a different kind, an excursion into the deepest, darkest center of cinema and its immanent construction not outside of time but within time.

Marker’s film doesn’t introduce time. Time is all around films, is the tangible-intangible currency of the medium, is the medium itself. Marker simply demands that we confront it. The lost world in La Jetee is the uncertain and ambiguous geography of the past itself, not a specific past but the flow of time altogether. A death march of still images, each recasting and remodeling the former in a half-presence of live time, La Jetee defies the compulsion to completely cast a solid mannequin of history, as though it is observing objective time that flows at 24 frames per second. This practice of most films – to boldly traverse time and rekindle the past – is not a choice but a fact of the very medium: all movies necessarily reintroduce us to the past insofar as they are a copy of the world that filmed them.  If Andre Bazin so eloquently articulated that the still image embalms time, casting a moment of the past in a death mask, Marker’s film takes a hammer to time, refusing to allow each moment to crystallize fully. We see moments as partialities, glimpsing an image that, after several seconds, gives way to the next, producing a liminal time that is neither the pleasing normalcy of 24 frames per second – the illusion of unobstructed movement – nor pure stillness, allowing us to stare at each image for an long as we please in hopes of grasping all its mysteries, akin to a photo or a painting. La Jetee is more cataclysmic still. It infects the image with its own brittleness and ephemerality, an understanding of transience that denies each image its completeness. Each moment is gifted to us long enough to partially solidify – like a viscous impression of a footprint in the memory of time itself  – only to be swept away before it can congeal into more than a haze of any given moment.

Gilliam’s film is a narrative of crystallization, by comparison. Its organizing principle is the linear trajectory from absence to presence, from the elusive dark to statuesque reality. Its essential urge is to corporealize memory by processing it as history, proverbially “getting to the bottom of the thing”, the thing being the protagonist’s haunted imagination of a past event. As with nearly every film that withholds information, 12 Monkeys defines absence only as a negative condition to illuminate presence. It withholds information to play with us and to eventually pat itself on the back for its unobstructed revelation. The film visualizes past, present, and future as essentially neutral, interchangeable territories imminently accessible to the viewer; or rather, the film sees each as a continual presence, a state of being of the present, not subject to age and wither.

Comparatively, obstruction, in La Jetee, is not something to initiate but something immanent; film is always obstructed from access the proverbial “whole” of an event. Told (almost) entirely in still images, Marker’s film is not only a story but a philosophy of time, an investigation of time that cannot be reclaimed. Gilliam’s project is to pacify us with the thrust of narrative, to open up a conduit from longing to realizing, to figure out what event haunts its protagonist. Marker’s is to open up a fertile region of ambiguity and ambivalence where form and perception rather than fact and discovery reign supreme. Viewing the film as a narrative brought to conclusion trivializes it. What Marker questions is not what narrative he can create but how time even constructs itself in the mind’s eye and why the mind, and the medium of film as its sculpting tool, all but demands a completely accessible past and a narrative in the first place. What, in other words, are the preconditions for narrativizing.

Really, Gilliam’s film isn’t so much a reduction or watering-down of Marker’s vision as its diametric opposite, if we are being generous, or a misreading, if we are not. Twelve Monkeys accesses personal consciousness by destroying it, casting its protagonist’s memories as objective renderings of a world rather than personal perceptions. The film avoids or sands over the thickets of memory and replaces it with a concrete erection of unarguable history. Contrarily, La Jetee cannot escape consciousness, cannot elude its own subjectivity and its own provocative failure to render a harmony of sound and image for us. Whatever happens to Bruce Willis’ protagonist in Twelve Monkeys, Gilliam’s film takes for granted the masculine cause-effect, set-up-to-pay-off structure that La Jetee immanently questions.

Whatever temporal delay Twelve Monkeys partakes in is only for eventual fulfillment, a filmic-heroic act of eventual stitching-together as the film empowers itself to tie-up its own never-very-tangled knots. Memory in La Jetee is not so easily reclaimed or assimilated into our normal understanding of time. La Jetee is thus a transformative and dialectical space, not simply a mummification ritual that absolves the image from having to die. Notice the dexterous interlay of first and third person memories in La Jetee and the implicit suggestion that many of these memory-images are mental projections where the protagonist casts himself into his own images, positioning his memories in a pseudo-objective third-person that he could not have experienced at the time. Even when the film rouses semi-motion through shortening the length of the shots, it reminds us that memory is but a phantom limb of lived experience, a marker of the mind brutally attempting to recollect that which eludes it. This is a kind of courage to dismantle and vandalize itself that Twelve Monkeys never dares.

In one scene, the protagonist of La Jetee visits a natural history museum, a kind of cemetery-zoo hybridization of life and death. The photographs the audience is presented with, however, embalm and skillfully preserve the guests in-static, in kind with the animals; time becomes a great equalizer. Shot-through with negative space and ellipsis, the protagonist has been collected in a museum of memory. This undead time, not alive nor dead, is not so much symbolic as physical, literally enacted in the images that evaporate and give way to the next but cannot mimic the pristine 24 “truths” a second that most films take as the holy grail of cinema. Yet in dismantling the assumption of filmic motion, La Jetee also refreshes our sense of reality, locating one fleeting moment of motion – a woman, a love-interest, animated in time by the protagonist’s love for her, the presence and physicality of his memory only for her – that recollects the power of both cinema and the mind to hold onto beauty even in the face of immanent demise. The film’s death-shroud briefly catalyzes into a life that is all the more potent and charged with possibility because of what it interrupts, because the moving imager in all its presence is now an ephemeral process of creation rather than an assumption to be taken for granted. That the image can be willed into activity means it must fade away.

On one hand, then, La Jetee imagines cinema’s dream version of itself, its inimitable and inimitably doomed desire to reclaim time indefinite. But the film also reveals that trying to reclaim every event perfectly only embalms it, preserves it without the ephemerality of life itself. What separates the film from the nostalgic media of mass consumption is that the film does not think of caging an image in the shackles of the mind as absolution it from corrosion or corruption. Time passes, cognitive mapping fails, but it may be these very elements that grant life its mystique to begin with.

Some have said that Gilliam’s film boasts stakes/consequences while La Jetee wantonly wanders in the vortex of its own headspace. People locked into Western mindsets tend to define movies in terms of consequence and event, affording a movie “value” according to the diegetic changes to its world it presents us with. In this sense, the worth of each of these two films is essentially identical: nuclear war and whether it can be prevented. This mindset legitimizes the spree of 21st century films in 12 Monkeys’ wake (Looper, Source Code) that take essentially classical agency narrative structures and marry them to (or mask them with the faux-radical-enamel) of a more post-classical engagement with multiple timespans or realities. These films change – advance – primarily as a way to hide what they keep the same.

But La Jetee, which aims to rewire consciousness more deviously and with unsparing rejection of the shibboleths of cause and effect, speaks to an entirely different set of consequences. At stake is not any kind of diegetic physical war but a much more intimate and immanent form of horror and death: the severing of the link between the self and the mind’s eye as it recollects the self. For me, the (quite literal) slice of life that Marker offers during the film’s one true moment of live-action is a far more trenchant stake than any that most narratives might dare offer: an improvised joy not only in the face of but conditioned by the awareness of an imminent mortality. With its refusal to cater to the forms of monumentalism – overstatement and grandeur – typically slathered over films about the past, La Jetee is a transgressive, wholesale rupture in cinema’s presumption of objective mastery of the past, an attack on the aspirational, heroic, and ultimately sentimental cinematic language of historical recovery, and a tone poem to apocalyptic time.