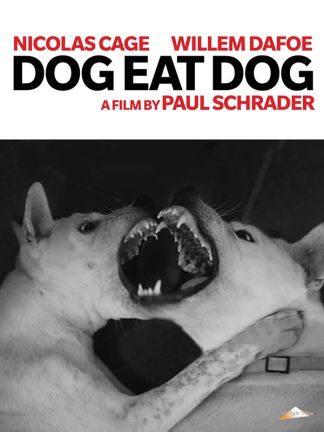 Paul Schrader is definitely hell-bent on something, but I’m not sure he knows what it is. Say the least for the famous screenwriter, journeyman director, and racist-anti-racist: he’s using the theoretically democratic “direct” medium of video-on-demand releases for unhinged stylistic, aesthetic purposes rather than simply a way to achieve distribution when the theaters have abandoned him for his maddened ways. The addled, feverish style of Dog Eat Dog feels like Schrader’s attempt to unleash the agitation he feels at being mostly dumped from the A (or even B) list as a writer-director. Rather than simply releasing an A-picture, the kind that would pass in one theater and out the other in a week or so, Dog Eat Dog is so disobedient, even dysfunctional, that it would feel like a raving mad dog in the hallowed space of a film theater. With the screen always lashing out in some new stylistic or thematic direction (almost by the second), the public audience of a collective theater-going experience probably wouldn’t have known what to do with it.

Instead, this volatile escape into Schrader’s mind, which is also an imprisonment in the murderous minds of his characters, belongs in the personal, intimate mano-a-mano environment of the sole viewing experience. Free of distractions and unattended to by the mediating force of other people, Dog Eat Dog on demand is a remarkably direct, one-to-one arena combat between the forgotten corners of Schrader’s mind, not neutered an ounce by mainstream corporate prospects, and the inner machinations of the viewer’s damaged head space. Christening direct-to-video a battleground for smashing the glass of your computer screen, television, or phone, Schrader attempts to attack you at a deeply intimate, almost carnal, level, rather than to reason with your better senses. The sheer absurdist and stylistic brio is, in fits and starts, almost remarkably liberating in its refusal to court the narrative restraints and logical compunctions of moral, safe-guarded mainstream cinema. The title on the tin says “written by Matthew Wilder” and “Adapted from Edward Bunker”. Yet Dog Eat Dog is almost enough to convince you that those names are aliases for Schrader (whose style is schizophrenic enough to validate the assumption), with Bunker’s decades-old career revealed as one long con for a director who often has nothing better to do than screw with us.

At the same time, Dog Eat Dog is more bark than bite, and when it does sick its fangs into you, it is often biting its own ass in the process. You just want to put a muzzle on the damn thing. Or even a straight-jacket. The story, insofar as this crazed and coke-addicted film can be called a channel for storytelling, follows three bumbling criminals: Mad Dog (Willem Dafoe), Diesel (Christopher Matthew Cook), and recently-released-from-prison Troy (Nicolas Cage, who at least isn’t phoning it in, although the plum bits are diffused to Dafoe and Cook, despite Cage’s natural aesthetic hewing dangerously close to the volatile histrionics of Schrader’s film). Although drugs figure in throughout, these three men are most committedly addicted to each other and their own collective incompetence and hubris, blindsided by their belief in their own masculine potency that they fail to see how quickly their out-on-the-edge lifestyles careen into off-the-rails deathstyles. When they try to steal a baby, the whole affair morphs into a high-strung, over-the-edge version of Raising Arizona with Cage’s dormant hairstyle the only thing less off-kiter than in that seminal thirty-year-old slice-of-Looney-Tunes-life from the Coen Brothers.

A minute or two later, and the consequences of those actions are but foggy memories in the film’s fried mind that ricochets around between scenes in a jittery, arrhythmic lurch. The tone and pace are so overdriven that the film’s successes play like disconnected, discomfited feints toward a sharper, more incisive film. For instance, the continued refrains to the fact that it the film is set in Cleveland, that most timid of cities, and yet it feels like a head-trip variation on Scorsese’s New York, feels like a joke that earns more points for sheer vivacity rather than for having any real point or purpose or being used to any meaningful extent. Elsewhere, the delirious cinematographic abstraction of the final conflict cultivates a trip down the river Styx to a final resting place or an existential limbo that completes Schrader’s obvious narrative arc toward the coarse psyches of his characters divorced form the real world. It’s a psychotically effective conclusion for a film whose near-giggling paranoia and antagonistic acid-battered sense of pulp finally contaminates the screenplay with something resembling poetic radicalism rather than merely cantankerous, brash “don’t give a shit” style. But this is also the conclusion of the film, a dementoid hot house that is unfortunately unable to mask the arbitrary, nullifying style of the film at large.

For instance, although hardly committed to anything that could be mistaken as a genuine “theme”, there’s a vein of racial antagonism the film draws from only whenever it suits itself. The finale suggests that black bodies are the inevitable fallout of white men playing out their renegade fantasies and antagonistic self-agitated mental conflicts to “find themselves”. That the only remotely professional endeavor the protagonists undertake is arresting a black man under the guise of three police officers shrewdly suggests that they only thing these men can coalesce around and not screw up is their own not so latent racism. The calm, coursing terror of the scene also implies that the boys in blue may frequently have ulterior motives for arresting black men beyond justice. This isn’t something we should have to know anymore, but films seldom tackle the topic with the kind of candid bluntness that at least seems Schrader’s modus operandi when he isn’t stepping all over himself with how blunt he truly is. But again, these pointedly diseased and sour moments are few and far between in a film that is mostly content to show off how sick and jaundiced its nihilism can get.

Which is to say: the film’s droll sense of humor and laissez-faire attitude toward style needs to approximate real thematic moxie. Even the film’s whispers of racial conflict are absent any of the anticipatory dread of white hostility or the maze of confrontation, collusion, and compromise found in Schrader’s better films. For every moment that hints at something akin to racial commentary, another three or four are smothered by the film’s interpretation of “daring” as throwing out a trio of goons and reveling in their anti-social, anything-goes attitudes toward hating everyone around them. A few digressions (and this film is all digressions) register as thoughtful. But as much of the race material feels like the film letting off racial steam and using the blanket of “commentary” as an alibi. The fascinatingly disfigured world of Taxi Driver has been replaced with a ludicrously indiscriminate bid to get a rise out of audiences any way possible.

At any rate, someone should certainly hire first-time cinematographer Alexander Dynan, who seems to have not bothered to pretend this is a real movie. He simply takes the opportunity to enjoy the laughing gas and make this his drip-paint portfolio centerpiece for future filmmakers that might be able to coalesce his obvious talent around some real purpose. Squealing strangulating visual cues out of his camera and coursing such an electric storm through Dafoe’s and Cage’s nervous, razor-wire performances, Dynan feels like he’ll explode if he doesn’t get a better feature to channel his energy through or to go ten rounds with. Going in, one would hope that Cage would be the obvious interpreter for Schrader’s screw-loose aesthetics (much as he was seven years ago for Werner Herzog). But Dynan is the real wringer here, forging a communion out of the emotional friction between languid, fatalistic poetics and head-rush energy.

If the screenplay was nothing more than an unpracticed, unshaven series of scrappy interludes designed to show off the aesthetics of the film, it might have something. But when one includes such obvious wringers as “when things begin to rot they are their least toxic for you because they are structurally bent on their own self-destruction”, you’re crusading for a theme about devouring oneself that your film is obviously not mature enough to deal with. It’s almost as though the script decided on the spot to advance an argument and then drop it at the end of the scene. In occasionally trying to gin up a reason to the lack of rhyme, the film steps on itself, making it difficult to enjoy any fun in the gutter the film so clearly occupies yet doesn’t think it does. At its best, Schrader forgoes loose-cannon criminals or cops and gives us unmediated loose-cannon cinema, less “means justify the ends” and more “the moment-to-moment high of the means causes you to forget the ends entirely”. Dog Eat Dog wants to find exaltation in blasphemy, but its puckish sense of style and wry comic swagger ultimately wager too much on the undeniable if miniscule pleasures of simply not thinking more than one scene into the future for the film to meaningfully care about anything except its own social antipathy.