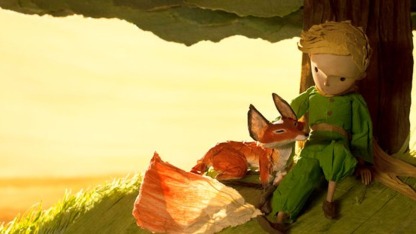 Most animated films are diversions, a word that can reflect insurmountable heights or pitiful nadirs depending upon the film’s free-wheeling, impish willingness to let their own inner-ids loose in the world and kindle “diversion” into a kind of liberation-incarnate. The lion’s share of these films, however, opt for a mere ephemeral surface of id camouflaging a hollow core of narrative conformity. They’ve massaged wishy-washy energy into a corporate sweet science, inlaying just enough momentary energy to achieve a slick, corporate sheen of pleasure without actually over-stimulating the momentous kinesis to the point where it approaches a threat to the status quo.

Take the otherwise splendid The Lego Movie, a spirited ray of joy that warps spatial geometry and cinematic energy only to reify yet another tired sub-Matrix Jesus-riff story about a sole, individualist savior who, in this case, utilizes capitalist technology for the good of the world. It’s a film of wrinkles in formula, but never does it bludgeon the dam and let the unmodulated childhood id free absent capitalist, or individualist, mediation. It pretends to teach us that uninhibited imagination is the life essence of the world, but the thought is naggingly scuppered by the film’s implicit, unquestioned ideological assumption that we must conform to acceptable means of freedom. The ostensible paean to the beauty of imagination for its own sake only locate the fallacies and limits of the capitalist drive to scribble within the lines but never to err beyond those margins.

For the danger-inclined, watch something like A Town Called Panic for a genuine artifact of momentary energy elevated to an actually dangerous art form. Cinema’s inhibitions and the limits of linear narrative, merely tested in something like the still-acquiescent Madagascar 3 with its casual dismissal of depth for kaleidoscopic whimsy, are bent, broken, and dissolved in Panic. Rather than stringing along surface pleasures while sinisterly conforming to the Hollywood edicts for streamlined narratives about bettering the self (through inevitably capitalist means), Panic gleefully dynamites the capitalist impulse by repurposing capitalist materiality for representations that, unlike The Lego Movie, have nothing to do with their traditional corporate signifiers. In Panic, a cowboy is a literal blank canvas for the childhood imagination; in The Lego Movie, despite what freedom it promises, Batman can’t be anything but what his masters made him.

The new French-Canadian animated film, The Little Prince, isn’t actually dangerous, but it’s at least a little disobedient, it repurposes material craft for similar flights of fancy, and it dares to sketch out a middle pathway in the “doldrums of conformity” vs. “blithe imagination” road-fork. Adapted from a roughly 75 year old childhood classic by Antoine de Saint-Exupery about the imaginatively inclined Little Prince (voiced here by Riley Osborne as a child and the amusingly disaffected Paul Rudd as an adult), The Little Prince unearths genuine treasure out of its bifurcated animation style.

The initial template of the film is all svelt, modern CGI without the fantasia or the cereal-like sugar rush. When we meet Little Girl (Mackenzie Foy), we also meet the exactingly modernist, right-angled limbo she lives in, courtesy of the overlords, naturally, and her mother (Rose, voiced by Rachel McAdams). Her life etched out in an expressionistic grey slate of a life planner literally looming over her in the frame, Little Girl catches omen-like chills of not only corporate fatalism but of her mother’s failed dreams. Failed dreams that only coax her to control her child’s life all the more so, coercing the girl into the very capitalist system that defeated the mother. All the adult woman can do is faint at her own busy-ness and police her child to “better” herself in the same corporate framework, rather than discovering a new form of lifeblood beyond the morass of conformity.

That is, until the girl meets vaguely discombobulated Aviator (Jeff Bridges), an elderly man who recounts the tale of another dreamer-child he once knew (the body of which is the text of the original book), prompting the little girl on a semi-adventure where child and once-child commiserate and things get just a little mischievous. Especially at the aesthetic level; although the dissonance between imagination and consumerist sedation is speckled all over the narrative, The Little Prince is a formal achievement first and foremost. The crippling dehumanization of the workplace, and of the philosophy it breeds, incarnates primarily in the too-crisp, corporate sheen of the slightly, and pointedly, undernourished CGI style of the “A” story featuring the little girl and her mother. Characters bearing a plasticine immobility that settles us in to an off-touch, mercenary world, the film then disrupts our perceptual senses with the rough-hewn, artisanal, and individualized handicraft of the stop-motion paper clay sequences depicting the little prince’s childhood adventures from another era. No mere visual refresher, the new aesthetic style is also a new imaginative template for the mind, a manifestation of the twinges of euphoria afforded a world of free spirits. Furthermore, with liberation incarnated in tactile paper-clay, the film suggests mental liberation grounded in a connection to the earth itself.

All flighty ambition and soft, directionless whimsy, the swivels from this frivolous paper-craft style to the slick determinism of the baseline CG elicit an almost Neanderthal sense of immediate cognitive contrast even more than the already solid screenplay from Irena Brignull and Bob Persichetti. By the end, dreams and reality comingle as the film emits rays of sunshine through clouds without torpedoing the cloudy-day melancholy of the tone. A little spacey and endearingly scatterbrained, the almost touchable flush of the paper clay animation is sometimes so itinerant that it is without a center, but the CG eventually mutates into a counterbalance for the other style, rather than merely an opposition. Youthful escapism and adult pragmatism ultimately harmonize in the aesthetics of the film itself.