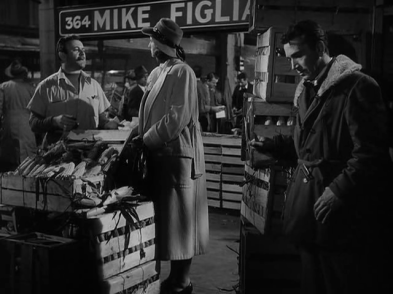 More or less, “film noir” doesn’t immediately conjure images of the fruit markets and roadside truckers adorning Thieves’ Highway, but any cognitive dissonance about the disconnect is allayed almost immediately in Jules Dassin’s wonderfully rotted-out picture, his final American film before an intercontinental exodus prompted by the dastardly House Un-American Activities Committee. Dassin’s communist sympathies inscribe themselves elegantly in the noir world where capitalist rot reigns supreme and disillusionment is the only, albeit temporary, salve against the Western lie of individual morality and pulling oneself up by one’s bootstraps. In the noir world, one person’s success is exclusively an agitated avenue for unsettling the possibilities of other humans for whom hope is an albatross and the American Dream is little more than a poisoned apple.

All of these perspectives are moral ignition for Dassin’s soiree with moral uncertainty and corruptible worldviews in Thieves’ Highway, a visual masterpiece and Dassin’s American pinnacle before the ironic liberation of being excised from the American machine actually awakened him to more experimental possibilities in European cinema. Even this early in his career, and hounded as much as he was energized by the Hollywood system,  Dassin’s film still manages to be atomic in its chiaroscuro-infused visuals despite being grounded to the sometimes visually-nullifying rod of narrative (unlike Dassin’s admittedly superior European films, which are still narrative-based but manage to stoke a near-experimental fire in their visual-first focus).

At least the screenplay by AI Bezzerides (adapting his own material) enjoins us to treat the story not as mere backdrop but as a consideration of life on the road of America, an off-handed, lawless land of rickety trucks and preconceptions of civilization that are near-terminal. When Nick (Richard Conte) returns from a stint as a mechanic during WWII, he returns to a rough-housed facsimile of his dormant memories of American society, as if the corruptible rot of conflict had infused America with a reservoir of double-dealing and back-room perils. Or, perhaps, Nick’s experiences with newfound decrepitude simply afford him the perspective to locate the shards of rot for the first time, his American Dream now erased by capitalism whisked into a pressing, malarial hot-box of vengeance and everyone-for-themselves hysteria. His father, and Nick’s memories, disfigured by vitriolic black market fruit racketeer (yes, I said it) Mike Figlia (Lee J. Cobb), Nick shacks up with his father’s friend Ed (Millard Mitchell) in vengeance against Figlia for wrecking havoc on his family, while also delivering a load of precious Golden Delicious apples along the way.

Dassin’s mortally pure noirs don’t reach Antonioni levels of spatially-attuned, perceptually-oriented filmmaking, but their disavowal of byzantine, over-stuffed narratives free up space for the melancholia of barren subsistence and the director’s scorching shadowplay abetted by lustrous cinematographer Norbert Brodine. Acclimatizing us to the clap-trap nature of the rigs and disrobing the essentially nomadic lifestyle of searching for the next buck at any cost, the screenplay and its campaign to explore a deviant manifestation of an all-American material (apples, for heaven sake) energize the batty reservoirs of Dassin’s mind and the deep recesses of his eye. He delights in psychologically-loaded imagery displaying the fictive remnants of golden American suburban morality strewn about the screen like bushels of fallen, toppling golden delicious apples. In this receptacle for stockpiled discordance, the punch of the visuals, like the sight of life-giving fruit harshly dotting the ground, are the film’s primary fount for punching your gut.

Throughout, the prolonged stretches and lingering stenches of middle California highway (a state and a road system both linked inextricably with an undying sense of American possibility and achievement) are ruffled by the darkness of the visuals and disturbed by a sense of semi-absurdism. An absurdism largely suggested in the very concept of a fruit-truck noir, and this is not a comic filigree lost on Dassin. The sight of a decommissioned WWII army truck recalibrated as an apple-delivery cart is speckled with surrealism, but it waxes into something more pointedly pathetic over time, especially after the half-painted truck is rattled and beaten-down by the filmmaking and images of oncoming traffic are superimposed over its bare countenance. Ultimately, it morphs into a scorched-earth expression of the tatters of veteran life cast adrift along the highways of American and barely tethered to a simulacrum or veneer of the American Dream that is more hopelessly corrupted than we could ever know; semi-absurdism begets closeted sacrifice as Nick flails and falters in an America that has little use for him. Rattled with biting, unsparing, astringent sarcasm and impassive, isolated visuals, Thieves’ Highway more than overcomes its relative sparseness of expressionistic imagery with its attack on the delusions of American grandeur. Apples, highways, the military, cutthroat economics, and in one scene, love itself are corrupted, abraded, scorched, singed,  branded, and seared along with any remnants of your hopes and dreams.

Nick’s own perturbed planning for his future also unravels on the banks of the film’s sensual allure toward, and vitriolic critique of, America at its nastiest masked by America at its most wholesome and ginger. Ostensibly chock-a-block images of American productivity, like the hazardous fruit market (all urban hustle and bustle and capitalist know-how), warp into lions’ dens or rats’ nests where the chaos of ever-busy capitalism suggests venomous opportunities in the back or side of the frame for sabotaging others of their futures. Speaking of wholesome and ginger, the film’s glistening vitriol even burns through the misfiring, slightly sloppy appended final scene shot by Darryl Zanuck at Dassin’s protest (Dassin having been blacklisted more or less near the end of production in this film).  The manic tonal schism of the final scene and its too-pat innocence almost legitimate the film’s exploration of the alchemic artifice of the American way. It almost functions like one final joke on the film’s behalf at the expense of an audience willing to believe in goodness and possibility in America even when it’s handed to them in obviously loopy, out-of-nowhere conclusions like this one.

Even in the end, Nick’s aspiration for a comfortable, morally uncomplicated lifestyle are scattered on the road behind his rust bucket of a truck, a physical manifestation, or a corollary to, the narrowly clipped together tatters of the world. The memories that linger aren’t the aloof ending but the wiry punch of the economical framing and the tortured morality like an apple that glistens like poisonous mercury infesting your soul. Or a wickedly naughty pass at the perversion of the fleshy body when Nick’s tease Rica (Valentina Cortese) literally sketches a tic tac toe board on his skin with her thorny nails, embodiments of her sexually aggressive humanity where warping flesh is a channel for acknowledging flesh and even respecting it in the first place. Comparatively, people like Nick’s fiancé Polly (Barbara Lawrence) value only material wealth; Nick’s physical and mental selves are irrelevant to many people in the world, and scenes like the tic-tac-toe board scrawl this abused loneliness all over the screen. Every angle he carves out for success is met, and slashed by, a geometric one in Dassin’s framing, all embodiments of Nick’s inability to interrupt or slide into a world without it lashing back at him in this valedictory for America.