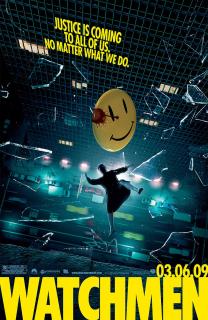 Technically accomplished but dramatically inert, Zack Snyder’s Watchmen is  a superficially beautiful, primarily pretentious, and sometimes cinematically divine waxwork, an odd mish-mash of screwy, mercurial allure and loopy slog that doesn’t know when to say when. Either too long by double or too short by half, Watchmen is intent on disrobing the superhero mythos and mostly unclothes itself. An adaptation of a famously unfilmable book by Alan Moore, Snyder’s film – as was true of his mirror reflection of Frank Miller’s 300 – largely copy-pastes its other-medium predecessor, exhibiting indifferent cinematic flare except in intermittent, egg-beaten shards of compositional whimsy. By and large, it’s so indebted to its source material’s bylaws – and yet so incapable of achieving its source material’s essence – that it feels doomed to death-by-a-thousand-fanboys, all committed to ensuring all of their favorite scenes make it in the film without any consideration as to why or where they belong.

The bits that work, however resplendent they may be, are swallowed amidst the throngs of Snyder’s verbatim quotes from the graphic novel that don’t channel into a cinematic medium in the slightest. Snyder, for all his monolithic, byzantine bigness as a stylist, is a decidedly cowardly adaptation artist, pulling the cinematic equivalent of block text in fear that his own stamp – whatever that may be – would brand him a backstabbing imposter to the Moore throne rather than a genuine artist with a perspective of his own. The result, a bewildering blend of auteurist vehicle and genuine hackwork, is a mess, but not an inspired, bedeviling, fascinating mess. In his inability to commit to channeling his own vision of the material, he made his bed, and Watchmen sure does force us to sleep in it.

Snyder has never exactly endorsed a “cinema of subtraction”, but his first film, Dawn of the Dead (and none of his others), embodied the ignition fluid and spark of a classic B-movie. Since then, he has jilted any sense of humility and doubled and tripled down on philharmonic largeness without ambition or baroque, omnipotent beauty as corollaries. With Watchmen and its engorged runtime, this takes the form of a zealous, ardent commitment to the particularities and eccentricities of its subject matter at the expense of its flow or rhythm. It is a too-literal, almost platonically perfect adaptation of a text that, in its feverish no-holds-barred, no-expenses-spared insistence on authoritarian replication, bleeds the text dry, sacrificing its spirit, and more or less replacing invention with mimicry. Skilled mimicry, maybe, but in this case it amounts to embalming a cadaver.

Admittedly, Snyder’s style, with its heavy-handed fetish for near-static motion, is a letter-of-the-law fit for an adaptation of a comic book, but as opposed to awakening some dormant spirit of time failing to move forward (a theoretically fascinating visual achievement, and partially the point of the comic), it only further induces torpor on the screen.  The sole gold filigree of the style is the opening credit montage, a countenance of sepia and stillness ossifying the past in droll half-memories paraded out before us, their gauzy beauty as a gossamer fabric failing to mask the grotesque violence on display within them. The camera slowly pirouettes around still images, suggesting the false movement of progress hiding the undying stillness of corrupted morality (a focus of Moore’s vision) while Snyder’s pointedly artificial, self-consciously soft-focus pop-imagery suggests memories as stagnant, partial imprints on the mind and simulacrums of true events.

From there on, Snyder’s style is both monotone and unsystematic. The film devolves into a tangled, thorny web of solipsistic interweavings that fail to replicate the book’s intricate intermingling of time and space in the form of still panels, which in the comic awakened awareness of the ossification of the temporal realm and the rigidity of human morality. These themes elude Snyder, who seems to deploy slowness willy-nilly rather than as a commentary on much of anything. Even the fleshiness of the action evaporates under the thick gauze of the slo-mo speed-ramping; at some point, whatever curated purpose the artisanal sleekness of the cinematography serves as a commentary on cultural artifice disappears. From there, it’s all text, visage, façade, with painstaking recreations of certain frames eliding the calculated way they were interspersed in the book to imply a lack of momentum in the world. The cinematic medium imposes motion, Snyder responds with a hollow simulacrum of half-stillness, and the film is stuck in a rut of lethargy that is only ever half-cocked and dispiriting, fundamentally unable to metastasize the languid pace into true stillness and an embodiment of a theme like the comic. Instead, it just feels like Snyder’s reproduction of cool.

Drifting into the ex-heroes’, always-villlains’ minds via what technically amounts to an exploration of a murderer offing the now-retired figures, the film indeterminately splits its time over non-entities who lack the ambiguity of the source and whose vacancy similarly never reveals anything about the emptiness of humanity. Running down the rogue’s gallery of discomfited misfits, there’s the authoritarian super-intellect Ozymandias (Matthew Goode), there’s the token female Silk Spectre (Gemma Arterton), there’s the roguish ne’er do well and rape-centric nihilist The Comedian (Jeffrey Dean Morgan), there’s the grotesque-parody-of-milquetoast-manliness Nite Owl (Patrick Wilson), and there’s the dispassionate God-figure Dr. Manhattan (Billy Crudup). And, naturally, there’s the impassive reactionary misfire gurgling brow-beating nihilism like a shield from having to address the world, Rorschach (Jackie Earl Haley), who approaches an imperiled future like an apocalyptic fugue. The already tiring symbolism of his mask, with black and white viewpoints literalized on his face, shifting without rhyme, is clearly lost on Snyder, who positively adores the dude.

The whirlwind pace of his supremely satisfying debut feature and its physicality is also lost on our director, whose tone here is fossilized drama cast adrift in a misplaced pillaging of the original text. The film mutes him, turning him into a sycophant, a bootlicker, harnessing a technical assemblage of the original text without the gusto or the backbone of moral jeopardy. The sadistic perversion of the superhero status-quo is a noble goal, but Watchmen leadenly trudges out information and event like a crucible; that the film admirably paints these central figures in a gloriously disreputable light does little when the hypertrophy of the film stifles any of the maniacal glee or lunatic craze it ought to erupt into. We’re never in the presence of anything more than a gross pantomime.

The only notable missteps are the songs, but because the film is so soporific in its unwavering objectivity to recreate the source without ever disrupting, enhancing, or enlivening it, these songs double as the film’s only notable personality quirks at all, and somewhat accidentally its most singular achievements. A sex-scene set to a particularly lugubrious manhandling of “Hallelujah” would be divine camp in any other film, but here it’s one more signpost for how wooden, cloyingly obvious, adolescently symbolic, and unwaveringly tamed this Xerox of a lively original was. Even in its fatalistic inertia, Watchmen the film is non-committal where the original was pointedly fatiguing in an expression of simmering intensity and predetermined time. You want sloth hiding wrath, and all you get is gluttony.