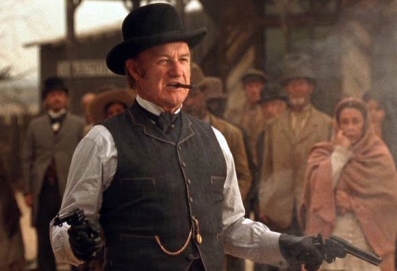 With Cutthroat Island as the never-off-the-ground bottom leg and Waterworld as the high-flying upright obelisk standing up on 175 million, the right triangle of box office halitosis spewing out from weird genre adventures in 1995 was completed with the dismal performance of Sam Raimi’s Sharon Stone-vehicle The Quick and the Dead. Which, in this metaphor, is the gnarly hypotenuse, the connective leg between Waterworld’s hyper-production-designed, outré weirdness and Cutthroat’s illogical idiocy.

Not quite selling out after the completion of his engraved-in-underground-cred Evil Dead trilogy, The Quick and the Dead survives the big bucks semi-intact, as wobbly and essentially pointless as the actual production is.  Bringing a loose, whip-smart, rubber-faced comic sensibility to the Western genre far different from the deluge of dour and solemn early ’90s Westerns racking up attention around this time, Raimi announces his intentions just about from the very beginning: in wanders a Man With No Name figure in a bar, the swinging doors opening up to the enigma of a human (although we know now she is female, at least) and as if to announce their presence, a name pops up below. What does it say? “Directed by Sam Raimi”. Again, clear intentions, conveyed in a slithering, visually witty way: I am Sam Raimi, this is my film, and I am a mythic director of B-movies walking into the landscape that is the ‘90s to give it a kick in the ass, and you will soon know my name.

Elsewhere, the whole idea of the film, a for-fun-and-glory quick draw competition in the center of a town played with the charisma of a football game (complete with tournament-advancing chalkboard and everything), upends the idea of the old-school Western by liquefying it, knuckle-dusting it until it registers as game more than lived-in experience. The idea that the “Wild West” was just a spectator sport is not an angle that has been explored with much conviction elsewhere, and Raimi jumps in head-first. Our major principles consisting of lone rider Sharon Stone (who lobbied for this film rather vigorously after Basic Instinct), adolescent sharp-shooter Leonardo DiCaprio, raffish Russell Crowe, and snarling coiled king snake of a villain Gene Hackman, this deliberately structureless film struggles to overcome its narrative conceit. Early on, the gunfight-cavalcade is liberating, implicitly reprimanding narrative edicts by eschewing narrative progress altogether, but over the film’s slim runtime, the rhythms ossify into a staid gunfight-revelation-gunfight-revelation structure that grows tiring before long.

Still, if the big picture is a wash, Raimi explores the nooks and crannies of the film with so much mangled elan and ornamentation that everything rattles along, even though it never once really hums. The first shoot-out, for instance, is galvanized in all sorts of Raimi-esque tilted comic-book frames and crash zooms, which begin amusingly, truck along gallantly, and eventually become so indulgent that they can’t but be inspired in their sheer failure to sit back and do as they’re told. The early goings of the film course through the veins of pure cinema, imbuing the sun-scorched cinematography with a gothic milieu and a tweaked-out, giggling energy that bats away the lethargy always creeping around the edges.

Dante Spinotti’s cinematography is the real barn-burner here, not Stone who is singularly unable to open up a pathway to the gallant artery of stylized silliness Raimi is operating within. She plays her role like a stone-faced Will Munny from Unforgiven, while even Hackman – who actually quarreled with Munny in that film from 1992 and is vaguely replaying his vile, authoritarian fist of a character from three years before – is able to carve out a new, more slithering personality that fits into this film’s more cartoonish insouciance. Spinotti, however, positively dances around the film with askew angles and reckless, hoarse camera slip-and-slides that suggest the film is about to fall down at all times. It is about to fall down at all times, but, insofar as this deliberately empty calorie fest can be, the cotton-candy fizz of nearly toppling over oneself is the essence of the film’s appeal.

At the end of the day, Raimi submerges himself so far in the briny deep of pastiche and style that he forgets to come up for air, and there’s more than a small threat of drowning. Again, the film has so many scaly, little pleasures lining it all up and down that it is nearly impossible to actively dislike, but the amorphous, formless nature of the piece, which suggests not even a whiff of a proper center, grows tiring in its episodic, sketch-like nature. If Raimi’s work is a luxuriously wrapped present with nothing inside, then the box being the present is an acceptable consolation. Right up until it decides it isn’t. The mischief only takes you so far when your final act sidewinds into the realm of unearned “straight” Western, the very prim-and-proper caliber that the early-goings of the script sought to pervert and upend.  High noon arrives for the film when it mistakes itself for a gunfighter-poet, rather than simply the skilled caricaturist quick-drawer it is more or less content to be in the beginning.