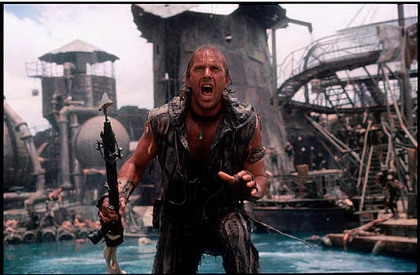 Waterworld, one of the cultural punching bags of modern filmmaking, is ungainly, unwieldy, and altogether unmanageable, but it isn’t inept. The production is ludicrous, certainly, but once the “175 million dollars (in 1995 money, too) to erect a film production on the ocean” hurdle is cleared by the audience, Waterworld emerges as a functional, and occasionally inspired motion picture. The improbable, almost heretical lunacy of the film’s concept even adds a certain salivating glee to this otherwise inessential, haphazard roux of fascinating production details and sloppy narrative histrionics.

Anyway, I’m not necessarily up and ready to commit sacrilege and declare Waterworld a good motion picture, but it hardly seems worth having an aneurysm about. Maybe a mild heart attack is in order about the opening minute, a cringe-inducing Hal Douglas narration (rarely existing within a film rather than simply a trailer) intoning about how the world’s polar ice caps have all melted on us, presumably realizing they don’t have much use for us pesky humans anymore. There’s something deeply questionable there, and in the astoundingly dated post-Lion King tribal rhythm score by James Newton Howard. But from then on, the film drops us in a production design fantasia of claptrap charisma and rust-bucket personality that outlines the feeble progress of humankind’s water-borne future in cosmic visual grace notes rather than in exposition, which is a feat in an age of blockbusters that drone on like manatees about plots they don’t need.

For a little while there, Waterworld is even genuinely fetishizing little character moments as Kevin Costner’s main character simply exists in the world rather than finding himself a whipping boy for a story. Even Costner’s borderline-plank of a performance is well-suited to the steely, scaly, self-invested bastard of a character he plays (it feels like a style here rather than a weakness), with the film’s willingness to restrict his vocal range serving as an abnormally contrarian gesture in an age where the decrees dictate a certain soulful over-reaching in our action heroes. When the machinations of plot do rear their ugly head, the satisfyingly lived-in murkiness of the opening moments morph into enjoyably unsupervised chemical impurities and tangents in a sea of expected blockbuster sameness.

Rules that, alas, director Kevin Reynold’s ill-fated blockbuster does eventually stagnate into, accepting the arteries of a major blockbuster and fanning the fires of grandness when the little moments of human tribalization and culture after the flood were much more appealing. The “girl has a tattoo of a map to dry land, Costner shepherds her and her overseer to safety” main narrative feels like a consolation prize to the masses to balance the grease-painted goofiness and riddled-with-strangeness puffing and wheezing of the production design and the satisfyingly broken-down costuming, with individual humans ornamenting themselves with little details and flickers of outlaw energy as they try to preserve their individuality through their very clothing.

The bones of the material are Dennis Gassner’s pungent production, John Bloomfield’s slimy costuming, and Dean Semler’s satisfyingly grungy, washed-out cinematography, all of which are grafted in some manner from the exploitation cinema that went mainstream with George Miller’s Mad Max. Which is enough of a personality dose to infuse the film with a temporarily traitorous energy that feels reckless and dirty rather than neutered with safety. Of course, certain aspects of the story – namely the hunt for land as metaphor for hunt for meaning allegory – sabotage aspects of the more pleasantly piratical design (as a pirate movie, it sure trumps Cutthroat) by forcing it all to mean something. But the physical design of the thing never downshifts into outright, pointless vestigial structure, always retaining a certain life and vigor even amidst the doldrums of the script. As in the proverbial olden days of Douglas Fairbanks and Hollywood glamour, there’s a raffish, we-included-this-because-we-wanted-to ineloquence to everything – including Dennis Hopper’s full-throated, arterial odd fellow of a performance as the vile Deacon – that oozes a kind of mutated charisma even when it doesn’t accomplish anything else. 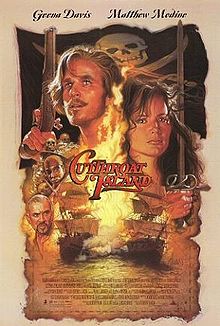 The marriage of director Renny Harlin and star, his then-wife, Geena Davis, is fatal attraction in Cutthroat Island, the de facto “worst box office flop of all time” where things go awry almost immediately with the cardinal sin of pirate cinema: it has a plot. One it just won’t quit, expending a great deal of its energy dying of the consumption of dialogue when something more rakish and high-flying should be in order. Cutthroat Island speaks a great deal, in comparison to the (relatively) set-up free Die Hard 2 and Cliffhanger, negligible films both in Renny Harlin’s filmography. But, at least, they were ones more acclimatized to their audience’s desires than Cutthroat Island, a film which vacillates between loquacious drama, inept cartoon, and charisma-challenged action that more or less buckles as soon as it starts.

Truth be told, Cutthroat Island is not an inordinately elusive picture as far as pigeonholing its failures are concerned, which somehow nullifies it and dulls it even further. A great box office failure should be a mystifying, bewildering accident of circumstance and crazed, brazen defiance of filmmaking norms, but Cutthroat Island just sort of sits around being a trivial pirate movie for most of its run-length, falling prey primarily to the box office curse of pirate cinema (we forget, in this post-POTC age just how much of a box office pox a pirate film was for decades) than to any specific ineptitude on its own part.

Geena Davis, in the role that killed her career, is plainly giving her all to decent effect. Matthew Modine, plainly is giving his all to improbably grotesque effect as a rapscallion Davis’ pirate captain acquires to help her discover a lost treasure (from a map written on her father’s scalped head, no less, in a ghoulishly baroque gesture the film around it is not interested in corroborating). If you squint, you’d half-suspect we’re in Keanu Reeves territory here, but for your pleasure, Johnny Mnemonic was another of the year’s many spoiled box office somnambulists. Co-starring with the two is Frank Langella, doing his expected thing as the sublimely-named, restraint-challenged Dawg Brown, a name that becomes the butt of a joke that suggests a confidence on the screenwriters’ parts that is unbecoming of a film that really doesn’t deserve any confidence at all. The character’s name is, at least, kind enough to intimate the Pavlovian salivating that Langella erupts into whenever his paycheck is dangled behind the camera.

Plank-walking puns for the cast and crew ought to be verboten out of good taste, but the film begs it from time to time, shuttling around from moment to moment with a slovenly anti-gusto that suggests hackwork without either an inspired deviant, outré personality or more plainspoken nuts and bolts craft to batten down the hatches (see, couldn’t resist). The film is primarily in the mood of actively avoiding itself by decrying its exultant silliness with the dramatic narrative airs it dons, and then eschewing those sonorous, dramatic bonafides by indulging in sick, trivial jokes all over the place. The nature of the character artifice doesn’t even gallantly recall the jubilant shenanigans of an Errol Flynn picture, which would have exhibited the moxie and courage (much like 2003’s genre-saving Pirates of the Caribbean) to tenant a realm of cartoonish, artificial, almost free-associative glee. In comparison, Cutthroat is not only a film in search of craft, but on a voyage for a tone.

As for the feminist themes latent – or nonexistent – in the project, all I’ll say is that Davis’ career failure here – in comparison to, say, the many deaths and resurrections of stars like Bruce Willis and John Travolta – proves that men can do all kinds of Hollywood wrong while higher-ups turn the other cheek. Women, much like the pirate genre itself for decades of its existence, only seem to get one shot before they’re stranded on an island with a treasure map that leads only to fool’s gold. If Cutthroat was the pirate genre seance of the ’90s (much like Polanski’s Pirates was for the ’80s), it ends up being just another excuse for a funeral.