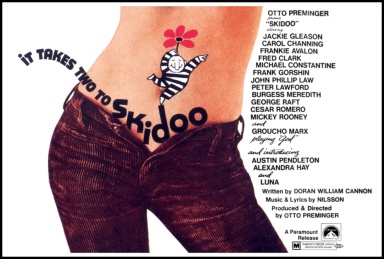 Glimpsed in light of Bob Rafelson’s youthful Head, released in the same year and theoretically covering the same territory, Otto Preminger’s gloriously screw-loose screw-up Skidoo is frankly mortifying, but it’s embarrassment with a purpose. While the former film burrows headfirst into a subterranean bebop of drug-crazed hyperbole with an editing rhythm like deranged improvisational jazz band and a mind ready to explode like the decade the film concluded, Skidoo is an improbable parade of Old Hollywood leftovers struggling on a voyage to The Way Things Are Now without a clue in the world how to chart their way. Head rushed around picking up the pieces of the world collapsing around it, while Skidoo is already in free-fall. An air of malfeasance and curiosity hovering overhead, Skidoo suggests a collection of trapped animals trying to figure out what the hell got them there. While the youths of Head are searching for an escape from an oncoming apocalypse they clearly see coming, the cadavers in Skidoo look about ready to enter a mausoleum.

Although not quite; Preminger’s film is too peculiar, even diabolical, to be reduced to smithereens by audiences who want to cast it away into the realm of trite pointlessness. What it most closely approximates, unlike the pointed death-drive of life found in Head, is a film either improbably unhappy with itself or a film about its own unhappiness, a sickly, jaundiced looking film of pasty-white once-icons rendered all the more skeletal and pallid by the flaring day-glo colors they wear, colors that are vague reminders of the pastel suburban Americana they once epitomized that has now drained them of life. If Head explodes, then Skidoo withers away.

The bare threads of narrative apply, however tenuously. Retired mobster Jackie Gleason is hired to kill Mickey Rooney in Alcatraz and Frankie Avalon is hired (stolen, more like it) by Carol Channing, Gleason’s wife, and his hippie daughter to take them to mob boss Graucho Marx who can maybe hopefully get Gleason out of prison when his attempt goes awry. I mean, they play characters and all, but the film is so desperate in the first place to throw aged actors our way that forgetting the character names only feels like meeting Preminger on his own terms.

Oh, and there’s LSD, because it’s 1968, but while Skidoo trumpets LSD with a cautious, what-are-we-doing-here befuddlement, something like Head actually embodies the lawless entropy of a drugged-out world on the edge of itself. In other terms, while Skidoo feels like a game of sitting around with the pill in your hand deciding what to do, Head explores LSD down to its bones. Preminger is vastly more discomfited as to what to do with the drug, right down to an LSD trip that is plastered in like a callous nightmare from another film.

But the garish nature of the production is only part of the way to failure. Although the film crumbles underneath itself, the tortured relationship between the mostly incompetent or otherwise ghoulish older generation and the also incompetent, but generally more genial and hopeful youth, signals something closer to a film with intentionally crossed-streams and tortured ideologies. At some level, Skidoo isn’t a failure so much as a work in heated argument with itself, attempting to resolve a monstrous hybrid of disparate ages and ways of life in a conflicted tension it embodies in its very frailty. That the film can’t stand on its own two feet leaves it feeling not only incomplete but like a fascinatingly unresolved expression of an incomplete world.

Rather than bad per-se, Preminger’s vision – buttressed by his implicit endorsement of youth culture and his desire to save face with those within his age group – results in a proper, once-in-a-lifetime discovery, the sort of film where every actor appears physically pained to be caught in front of a camera that feels like a tabloid journalist. Except a tabloid journalist would presumably have exhibited some monomaniacal, fanged passion in pursuing their target. Preminger, in comparison, vacillates between the stodgiest, most stifling Old Hollywood stagnancy and a disconcerting, disarming graciousness in the way he throws characters into the frame without much composure or question about which character we’re meant to follow. It’s broken stylistically, but the shards of a proper story and a normative tone only beget something more demonically unsure of itself, like a film trying to throw Old and New Hollywood styles at the wall and not questioning what sticks.

Which is why this unclassifiable, undomesticated film lashes out horizontally for any perspective it can find, recalibrating the screen away from the one-or-two character thrusts of Old Hollywood and toward a dalliance with as many characters as it can find, casting the screen as a kind of democratic arbiter of the messianic messiness of late ‘60s culture that would be embodied most saliently in Robert Altman’s films. There’s a twisted, anything-goes trauma to the way it casts once-stars in roles that signal not so much faded glory as sharks preying on the youth, almost as though the film were a satire of the Old Hollywood’s crumbled thirst to appeal to youth culture in any way possible. The pungent, gross Technicolor cinematography swamps Dino De Laurentiis style candy histrionics under a grainy malaise that turns the color into a shell of its former glory, like a plastered-on, plastic shield adopted by the elders to recuse themselves from conversation with the youth, or at least to pretend to don a simulacrum of their new way of life.

The youth are still rendered an unclassifiable murk, but the vagueness, in light of the aged gargoyles around the teens, registers as Preminger reaching out to a culture he wants to understand and shedding a tear when he resigns himself to the assumption that he can’t. Writer Doran William Cannon also scribed Robert Altman’s forgotten near-masterpiece Brewster McCloud, so the bones of giddy exultancy are all over this film as well, but Preminger’s more exhausted way of filming the chaos suggests a film tired with itself, a film trying both to interact with youth culture and to adopt a position on the other side of a gorge with binoculars, trying to embody the hippie spirit while treating youth like caged animals in a zoo. It’s inscrutable, manic, and sexless, both hip and breaking-its-hips. But there’s something fascinatingly un-medicinal and frightened about this depiction of the slippage from the Old Hollywood Every-Name-in-Showbiz Epic (of the early ‘60s) to the free-associative liberation of the late ‘60s).

Graucho, the marquee star returning to the fold on sabbatical from his recluse days, was a nearly 80 year old actor painted over in a malformation of his former self, somewhat a totem to the old ways but more of a cemetery for them. A final image of Graucho’s cigar, always his weapon back in the day, is morphed into a blunt. The eruption bluntly (ha) functions as a false punctuation – a summation of the old perverted by the new as the old fails to keep its head above water – to a film that desperately decries anything resembling a punctuation at all. While that image might nominally conclude the work, threads are left dangling in the air for us without any hope of finality at all, curdling the blunt into a pitiful joke that signals the inability of the film to actually punctuate itself in any proper way. Somehow the exultant anarchy of Graucho’s, and Preminger’s, younger days survives in a film that seems aware it is being attacked on all sides and pulled in every direction; while a younger Graucho proudly acclimatized himself to the chaos and morphed into its instigator, Skidoo is a premonition of a world without singular instigators of bedlam, a world no longer able to cope with itself.

Score: A number does not feel appropriate, but tentatively, 7/10