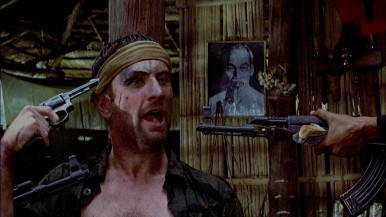 After resurrecting Hollywood from the stench of indulgent grotesque fantasias of the ‘60s that suggested only that everyone in LA had lost touch with reality, the rage and the recalcitrance that epitomized the American directors of the ‘70s swamped the nation with the renewed vigor of a country that was terrified about its own future. By The Deer Hunter’s release in 1978, the pandemonium of the decade had infested the films about the decade as well. The Deer Hunter, along with its even more improbable, free-wheeling follow-up Heaven’s Gate and Francis Ford Coppola’s fever dream Apocalypse Now, is among the most torridly unhinged films of the decade, an operatic dementia conclusion to the slow-burn of a decade, and a decade’s cinema, losing its mind. Something like the Great American Tall Tale of the 20th Century, The Deer Hunter is precisely the mess that the Vietnam Generation was. And, as an explosion of unmitigated, almost uncontrolled filmmaking that pursues the New Hollywood ambition to its limits, Michael Cimino’s most famous film is the perfect work to serve as the last bow on the New Hollywood style of filmmaking.

Obviously, The Deer Hunter isn’t Heaven’s Gate; the former was an instant commercial and critical success and the later one of the most impossibly engorged deluges of commercial and critical lambasting ever released. But, while a mere two years difference saw audiences give in to the Star Wars machine by the release of Heaven’s Gate in 1980, and thus give up on the New Hollywood auteur id running amok all over itself without any accountability, The Deer Hunter is very much the antecedent to Heaven’s Gate. Both exhibit Michael Cimino’s almost tribalized my-way-or-the-highway vision and showcase his near-total control of his cinema and his sonorous, symphonic breed of filmmaking perched on the precipice of sublimity and the inevitability of failure. Breaking their structure down into classical acts and weighing themselves down with a tempest of thematic ambition, all of his films are possibly-runaway balloons nearly rupturing themselves from the moment they start.

Which is why, in retrospect, Cimino’s cinema feels not embalmed or ready for the mausoleum but fresh and otherworldly to this day. His films could fluctuate between the sudden shock and the graceful torpor of ostensibly lethargic rhapsody, and he alone directed with an eye for both gonzo mania and a more restful, violently placid beauty that lingers on the sight of the lost spaces of American culture rather than energizing into a battering ram to burst through them. Not unlike Coppola’s baroque Godfather pictures but with a more mist-clouded American graininess combating Coppola’s European grandiloquence, The Deer Hunter is a pastoral myth about not only Vietnam but the American West, the story of three domesticated men who tread water until they are thrown into an unknown land that manhandles their egos and leaves them broken and shattered. And not broken or shattered in the heroic ways they’d naively hoped for.

The three West Pennsylvania steel workers are Robert De Niro, John Savage, and Christopher Walken, all playing members of a close-knit Russian community that the film endures with for the length of an hour before war interrupts their relative semblance of domesticity. With Vilmos Zsigmond on the lens, the early goings of the film graft that poetic mist from his work on Robert Altman’s McCabe and Mrs. Miller earlier in the decade, evoking small-town lives in hushed, intimate tones that vociferously contrast, and are thus displaced by, the throttling nightmare of the war scenes. The beginning portions of the film, and judging from the results, the passage that Cimino was most invested in, girder a film that fractures war cinema norms by proving reticent about war itself. The Deer Hunter delays the battlefield outside the States for the duel of furnace-room malaise and pictorial small-town hope on American soil. The most obvious benefit of this decision is to avoid the instantly-pummeling “war is hell” weight that every film of this nature turns to in hopes that they can use violence to ingratiate themselves to audiences who don’t care for the thematizing and desire something a little more immediate. Well aware of Truffaut’s famous declaration that any war film innately enshrines war in thrashing excitement via its editing and imagery, The Deer Hunter prefers instead to subsume war in a cloudy ennui and morass of confusion and disruption by holding off on the violence until it means something in the first place.

Of course, if The Deer Hunter is America by way of symphony, then it disrupts and reorganizes the assumed order of a symphony by kindling the middle-passage into the sanity obliterating one, with the weeping eloquence we expect from a symphony’s second act transposed to the beginning. In a sublime graphic match that seems to literally puncture the film, we are suddenly in hell with the three men, and Peter Zinner’s now discombobulated, twitchy editing is our cocaine-addicted Charon guiding us through mortal terror with a palpably distorted sense of space providing us with not heroic death but impenetrable, persistent limbo. While the early goings are so acclimatized to investigating the contours of the American town the men call home, this new style for a new psyche couldn’t be less compelled to grant its characters, or us, any hope of categorizing or discovering this new land that, frankly, doesn’t want us there in the first place. Ron Hobbs and Kim Swados, the art designers, swap out a luscious, verdant palette for a ferocious grain that nearly warps the faces of the humans in front of us. The horror of war is embodied stylistically, rather than simply proposed in a declamatory assumption in the dialogue; in a sublime marriage of content and form, the early and middle portions of the film are not on speaking terms, oppositions of the psychological realm that are inscribed in oppositions of the cinematic realm.

Perfection is beyond the pale for The Deer Hunter; none of Cimino’s films could truly be perfect, for their style is too engaged with disruption and decomposition to tie itself in the ribbons and boxy packaging of perfection. By the end, the film’s indulgences – always circling overhead, threatening the film with the very freedom from inhibition that sets it free – catch up with the film. Cimino’s style returns to the gilded, baroque well too much, and by the finale, the sense of demonic nightmarish is laid on more thickly than the film can actually medicate itself against. The last third, when De Niro’s character returns to Vietnam as a civilian to discover the whereabouts of the Walken character, who is now a professional Russian Roulette player, find the film somewhat uneasily testing the waters of the shift from poetic otherworldliness to exploitation cinema (they also reek slightly of Cimino knowing he’s onto something suspenseful in his depiction of Russian Roulette and deciding to indulge in one too many to appease audiences). Things begin to feel less like a representation of fractured psyches and more like a pile-on of unmedicated madness.

But, again, Cimino’s cinema was unmedicated cinema, and reining it in would sacrifice its brio to look into the void of unknown cinema. By the film’s end, Cimino tumbles over that void (a tumbling that would pick up speed into an outright careening by Heaven’s Gate), but even when he is tumbling, he never does anything with less than a full-throated gusto. Much like Terrence Malick buckled cinema by approaching it like a philosopher (his Harvard degree and short-lived but maxi-packed career as a Heidegger scholar serving as the foundation to his filmmaking career), Cimino’s duo of Yale painting degrees inform his films and allowed his style to challenge the predominant narrative norms of Hollywood filmmaking. Like Malick, Cimino’s cinema has a horizontal movement, both literally through the camera and metaphysically in its refusal to hurtle from moment to moment, that is sorely lacking in all but the least restive of American films.

Thus, Cimino’s fellow travelers weren’t so much Scorsese and Coppola as the 18th century Hudson River School painters Thomas Cole and Bierstadt, who infused their vision of American openness with a misty sense of wistful longing and a luminescent otherworldly use of light that signaled a willingness to admit that, for all our ego, we never can quite understand landscapes in their totality (Heaven’s Gate is, again, even more of a more in this direction). The Deer Hunter, although not as excitingly unmanageable as Heaven’s Gate, is an estuary between the flowing, throbbing rivers of New Hollywood and the more expansive tempo of other mediums that cinema has largely avoided. The result is a smidgen megalomaniacal, but maniacal and cinema are best friends just as much as they are enemies. Flaws aside, the idea of Cimino’s cinema being locked away in the faint memories of historical past is a disgrace, especially because he was so willing to rattle the cage of his medium and escape its limits, even if it meant discovering new limits of his own.