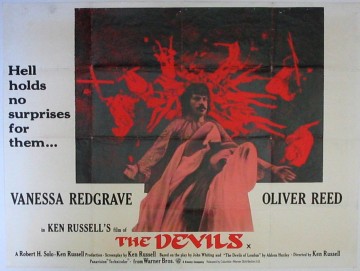 The historical prestige genre, entombed in its ever-lasting leisure, ain’t got nothing on Ken Russell’s The Devils. A power-mad concoction of scorching lecherousness and sacrilegious, anti-social visual brio, it’s a torrid affair, but love is nonetheless the only applicable word for anyone smitten with Russell’s peculiar brand of rattled-with-fever historical spasms. Few directors have ever barreled so gleefully into the dankest regions of their own inner mental faculties with such a cavorting brand of heretical dissidence, a defiance to not only social propriety but filmmaking rule of thumb. Fitting for a work about witches, Russell’s inimitable work feels like cackling witchcraft conjured out of nowhere but his own devilishness.

Somewhere between Huxley and Crowley, Aldous and Aleister, lies Russell’s demented vision at odds between questions of control, power, repression, and chiseled-down but not chiseled-away sexual energy fighting to be heard amidst all the chaos. Released onto the world in 1971 as if rabidly seeking first light after years brewing its identity in the proverbial dungeon of the mind, Russell’s vision of religious fanaticism and sexual potency casts the primordial against the parochial and clashes desire with dogma.

The style is gross, even garish exploitation cinema from the bowels, with the camera, fittingly for the theme, both tempted and tortured by flesh in the way it seeks out the human body and diffidently shuns its lust, ultimately never glorifying human flesh so much as acknowledging its messiness. People don’t look pretty in The Devils, in other words, with the camera scraping away the constructed power rituals that sexualize the body when they label flesh a forbidden fruit. The Devils, instead, depicts the human body as both our wonderfully fallible portals for expression and as crosses we all bear.

Sans glamor, the camera renders flesh as pitiful, pliable, pallid humanity that doubles as a battlefield for various social entities that strive to strip the flesh away from our bodies by turning us into ideas and causes. The explicitness of Russell’s film in this regard is liberating, his very acknowledgment of the primordial primacy of human flesh serving as a rebellious riposte to those very cultish social oppressions the censors of his films would rather not admit exist.

Russell’s psychotropic, occasionally hallucinogenic horror film is a decidedly, disarmingly thorny work of social discomposure. Centering on the battle of wills between the advancing thrust of Cardinal Richelieu and the fortified mental and physical walls of a rebellious splinter-town headed by Urbain Grandier (Oliver Reed), The Devils ultimately instigates a vision of society as a hothouse with cold showers approaching from all directions like a storm, desperately hoping to keep everything from boiling over.

Pulsing, throbbing camera gestures reveal the veins of a tale where sexual politics is cracked open like a dusty casket of snakes ready to infect everyone who pretends the serpents of human sexuality aren’t already coiling their bodies and rattling their tails. A great deal of the film’s tension thrives on the contrast between the fleshy camera thrusts– striving to break out – set against the modernist, oppressive white halls of the city set designed by Derek Jarman, itself a complicated question of scenery that serves equally to proclaim Grandier’s forward-thinking progressivism and his recalcitrant, antiseptic conservatism.

Just who these figures are, especially Grandier, is intentionally ambiguous, with the film perhaps surprisingly gesturing toward no real moral map as to the respective values of Grandier’s isolationist view and Richelieu’s more centralized governance. While Grandier is more explicitly sexual, his gambit is only to open up our inner-most sexual fluidity by oppressing women as his sexual servants, which is hardly a progressive gesture on his part. What we’re left with isn’t a side but a no man’s land (literally a no man’s land at times) of women (most notably Vanessa Redgrave’s Sister Jeanne) trapped in trench warfare between competing forces on either side, struggling to divine their own pathways for identity in between totem-like men who turn religion into baroque structures for their own latent carnal desires. In the end, Russell’s vision recasts the libidinous hedonism of future works like Caligula by dousing his work in a reverse-orgy where feminine sexual liberation becomes a form of legitimate rebellion, depicting women not as engaging in intercourse with men but women using objects of male construction as weapons for their own carnal pleasure.

Modern viewers may decry Russell’s orgiastic film as the epitome, or at least the vicinity, of camp, but who’s to say that’s a negative? Camp, compared to say satire, is only a victim of criticism because it dares to trouble us in a way satire does not; while satire, for all its disgruntled mockery of society, can always be linearly traced back to a trickle of normative assumption about worldly structures, camp defies those structures. Satire, a fundamentally representational form, can only ever exist in relation to the structures of the world that are assumed to be objective.

Or, rather,  while satire exists as a negative critique of objective reality, camp proposes a positive, alternative existence that troubles and dissents because it befuddles our sense of good taste. Satire can only reaffirm what we know to be true – it merely, wonderfully in the most notable examples, reifies the nature of existence by causing us to smirk at a vision of the world we already latently expect to be the norm. We can intellectualize and analyze satire, and therefore categorize it within our world, slipping it into its cubby hole and walking away, our hands clean because our interpretation of reality, if bent, has held strong. Satire, in a sense, confirms what we already know.

Camp is not so easy. Rather than delimiting itself to society’s normative demeanor, it operates as a more systemic overhaul of the rules and regulations of normative behavior, enjoining itself to an artifice that relates to normative society only through a more tangled web of aesthetic mechanisms. The pot-shots and ribs at society embedded in narrative and character in satire are instead embodied in the aesthetics of camp in itself, where antinormative behavior becomes a new norm. Satire pragmatically acknowledges the silliness of our world, while camp proposes an entirely different possibility for the world, a different means of existence. If The Devils frightens us or makes us laugh, it is only because its vision doesn’t care what we think of it.