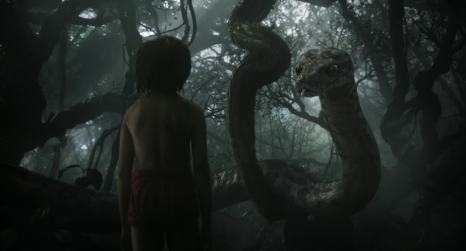 The vaguely taxidermied trailers for Jon Favreau’s The Jungle Book promised nothing more, and nothing less, than the latest in the continued death throes of Disney’s deranged vision quest to reclaim the surprise box-office domination of Pirates of the Caribbean. Having cascaded through animated properties both obvious and ill-timed over the past five years, the studio seems patently unwilling to give in to the critical and commercial failures of their many live-action properties in recent years. Yet the chiefest surprise with The Jungle Book is that it’s actually trying to pump some fresh blood into the corpse of Walt Disney’s final supervised feature-length animation release, rather than merely desecrating the corpse by propping it up on strings and performing a demented CG pantomime with it. And this is for a film whose idea of clever is to recast King Louis as a jungle mafia don voiced by an only semi-conscious Christopher Walken. But this is live-action Disney, now; grading on a curve is acceptable, like it or not.

Unfortunately, even grading up, the film’s successes are fundamentally intertwined with its troubles. Most of what works in the piece is borrowed rather than bespoke and crafted, leaving us with a not ineffective but mostly unimaginative trip to a vaguely rumored realm known as our imaginative childhoods. The film relies heavily – one might even say weightily leans on to the point of wounding – the original 1967 feature, but other influences from Disney’s throbbing post-Avatar fetish, to – oddly – Apocalypto are as thickly slathered on as they are questionable. “Trying” in this case involves playing it safe.

Which, on balance, buttresses the film as much as it fails it. It doesn’t take a doctor to diagnose the prodigious CG with accolades, but what is surprising is the relative leanness of the film’s meat. Favreau, who helped the original Iron Man avoid any of the corpulent later-Marvel calorie-hangovers, helps ensnare the CG halitosis in a vague semblance of a narrative and to keep it from running away with the film, all while recasting the film as something of a kiddie chase film. Which is almost uniformly an effective gesture, redressing the troubling girth and gluttony of many of Disney’s most recent live-action films (it especially feels like a riposte to the bizarrely baroque contortions of Gore Verbinski’s The Lone Ranger, which huffed and wheezed mounds of cartoon energy into its children-at-the-train-set session until you felt sick from the indulgent tonal whiplash).

Favreau treats the material with an appealing lightness of touch, allowing the obligations and cultural constructs of jungle life to emerge somewhat naturally without any of the exegesis we’ve come to expect from this type of narrative. Compared to its bigger, heftier brothers, The Jungle Book feels expedited, which is a breath of fresh air in an age where a blockbuster with a less-than-two-hours run-time feels like a Geneva-Convention-breaking crime. It is, at any rate, the better part of an hour and several ounces less pretentious than Batman v Superman.

There isn’t a great deal about the narrative you don’t already know, although resident sapien Mowgli (Neel Sethi) is reenvisioned as a circumstantial myth rather than simply an abnormally limber young boy. Raised by panther Bagheera (Ben Kingsley) and a cabal of wolves (headed by a male voiced by Giancarlo Esposito and a female afforded regal tenderness by Lupita Nyong’o), Mowgli casts himself out when dreaded tiger Shere Khan (a deliciously bruised, venomous Idris Elba) threatens him and his pseudo-family with his wrath. In a decidedly, and probably wisely, episodic narrative, Mowgli befriends schemer Baloo (Bill Murray, reiterating his usual laconic routine to decent effect). He also invites the rage of both python Kaa (Scarlett Johansson, one of the film’s highlights but wasted in a single scene only afforded a portion of the psychosomatic hypertension it ought to) and power-crazed ape King Louie (Christopher Walken, given weight and shrouded in mystery by Bill Pope’s sterling cinematography in what amounts to a noirish chase scene).

Compared to, say, Maleficent (a sublimely hurting, supercilious performance by Angelina Jolie in desperate need of a film), or the miscalculated Cinderella, The Jungle Book is a far more cohesive, sturdy construction. Unlike either of those live-action adaptations, this version of the tale capably tethers a winking comic edge to a decided physicality that even attains a corporeal fear in a few scenes (such as a swift, dispassionate kill on Shere Khan’s part, maximizing the mercurial mystique of a character whose anger at humanity surges through force of will into his claws). Favreau’s perhaps surprising strength here, buttressed by Bill Pope’s luscious cinematography that densely clutters the jungle in dread and mystery rather than gawking over its verdant vistas, is to afford the jungle a sense of danger and the animals a surfeit of physical, tactile impact. Slips abound, admittedly, especially two ill-fitting musical numbers that are embarrassingly thrust on to the film and then unceremoniously dropped as if the film was only just mid-song achieving awareness of their questionable presence. But these are exceptions that prove something of a rule of competency on the film’s part.

The film’s successes, pleasant as they are, do leave the film notably stripped of personality, lacking as it is any of the Beat-era not-quite-psychedelia pop-art of the original animated feature or anything to shuttle into its place. Even The Lone Ranger, another modern Disney reimagining of a mid-century cultural icon, buckled and faltered due to the improbable brio of Gore Verbinski’s personal vision of untarnished wackiness and his inveterate charisma and willingness to throw tones (and trains) up against one another in a nearly demonic, anti-polished, un-corporate fashion. He concocted a post-animated fever dream more than a film proper. None of it actually worked, but the insular, anarchic, one-director-army effort deserves a vague smirk. Bless him for trying.

In comparison, the vaguely self-congratulatory The Jungle Book concludes with a steady bout of jungle savior peacocking, ultimately whimpering out by pulling the most literal-minded trick in the book as Mowgli becomes an accidental species-bonding glue and mythic hero. A decision that not only feels committee-voted rather than written, but flies in the face of the amusing thematic dexterity of the original feature, which found time in between rebelliously shucking and jiving for a critique of Mowgli’s assumption of superiority. This new The Jungle Book ultimately succeeds because it tries hardly at all, and that carries with it a vaguely dispiriting whiff of corporate recalibration and profit-maximization. In that regard – spick, span, cleaned up of excess and pointedly crafted for perfection – it does more that update what many consider to be the finale to Disney’s classic-age Animated canon. It also sums up the machinations of modern Disney, neatly and carefully primped and packaged for your appreciation, better than any film could hope to. With many failures under their breath, it’s as if the company was living in mortal fear of not getting this one just right. In achieving their goal, they scrub the film clean of the sort of amusing tangents or accidents that might just have made it special.