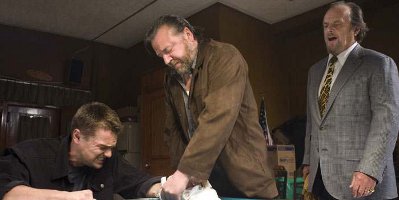 No one ought to be surprised that The Departed, unlike Marty Scorsese’s pantheon of vituperative modern classics, cleaned house at the Oscars in early 2007: the prepossessed nature of the film is such that it is defined almost holistically through its recollection of the Scorsese America knows and loves. This man is the throbbingly cinematic, movie-addled enigma who pitches his best films halfway between a symphony and a back-alley brawl. Scorching at its best, The Departed sometimes capably fills a voluminous shadow, but it never casts its own.

The thunderous early moments do their part, though, slithering around a grotto of duplicitous Boston locales like a sidewinding viper and lecherously prowling around the city streets owned by gangster Frank Costello (Jack Nicholson). The camerawork by Michael Ballhaus lurches around with a beast-like fervor, the editing by Thelma Schoonmaker scalps the film with a carnal glee. There’s a palpable sense of animation for a director who, although not in his home city, feels once again awash in the milieu he practically wrote the book on.

Well, directed the film on, at least, for Scorsese’s urging, impulse-driven filmmaking is decidedly an enemy of bookishness. Sequences like the opening montage shuck-and-jive around the story nervously for maximum under-the-skin effect. Scorsese’s flesh-and-bone visual uppercuts buttress a noirish shadowplay of punchy, pulpy precision in Scorsese’s trademark milieu, a groove many thought he lost a long time ago.

Years of Hollywood Royalty status, however, have taken the edge off a man whose films are almost unanimously as good as they are edgy; it’s why the astringent, shrapnel-shoveling Raging Bull will almost certainly never lose its king of the hill status as Scorsese’s masterpiece, or why Scorsese’s most striking sequence remains the stream-of-consciousness cocaine-nightmare of “May 11 1980” from Goodfellas. With The Departed, the cocaine is still in the system, but the dose isn’t remotely comparable. As jagged as the film can be, the whole is consistently less than the sum of its parts.

Partially, this is the fault of William Monahan’s overbaked screenplay, an adaptation of the phenomenal Hong Kong criminal enterprise Infernal Affairs. The garrulous screenplay for The Departed is puckered up with a dose of hard-working urban poetry, but the chatty nature of the film assassinates (gangland-style) the acidic chill of its cinematic progenitor, replacing it with a luxurious, large-scale mafia-opera that the material plainly does not support. This should be an intimate pistol-whip of a film: tight, tortured, bruised, and brutal. But what begins as a torrid snakeskin scimitar, ragged and coarse and slashing, folds in on itself over and over until the pulse is reduced to a flicker that is in turn drowned out by the sheer girth of material striving to twist and turn until it tires us out. At the risk of overstating the problem, the film is a vexed jolt of lightning that stretches itself across the ground so thin that the impact is mitigated if not entirely neutralized. The Departed is decent, often inspired filmmaking, but soon enough Marty seems prey to the trivial contortions of his screenplay rather than master over them.

The insatiable quest to wow us with an increasingly meticulous puzzle-box meddles in the film’s atmospheric space, clogging its arteries and reducing its time to simmer as the film bombards us with event after event of relatively menial worth. The initially-frighteningly, lecherous unpredictability of Nicholson’s performance engorges itself to a broad, caricatured campiness, and Matt Damon and Leonardo DiCaprio – cast as an undercover criminal in the police force and an undercover cop in Costello’s empire, respectively – are throttled around various plot points without room to grow into their roles. Ironically, The Departed is the rare film with both insufficient room to breathe and not nearly enough air to choke on. Possibly because it’s so busy regurgitating notions of honor and family Scorsese ran aground before the mid’-’90s. No one’s asking for a new record time here; The Departed is a victory lap, and that’s to be expected for a director nearly forty years on in his career. But the confident stride of the film turns tired, graceless, and monotone well before the run is over. 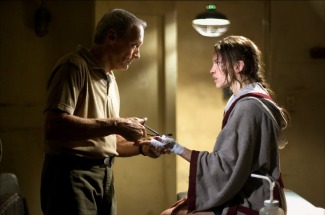 Director Clint Eastwood’s shopworn, callused style in Million Dollar Baby is the product of wither and age and a melancholic sangfroid masquerading as insularity and mental shut-down. In fact, though, the surface simplicity of his late-period films belie the placidity of waiting, watching, and soaking the outside world in, only speaking when you have something to say. Although it was nominally released in 2004, it occupies a tenancy in the mind of the ’50s noir or the ’70s working-class grotto. There’s a tempered sentimentality to Eastwood’s form that embodies the desire for connection just peeking out of a closed-off, closeted interiority. It stylistically and formally evokes the contrast between a broken, battered-down husk of a man and the romanticism he’s forgotten existed within him.

I mean, he reads Yeats for god sakes, but in a notably disfigured, oddly touching accidental family scene set in a hospital waiting room, he hides it from his would-be daughter. Played by Hilary Swank with a fearless, open-hearted fluidity that bites back against Eastwood’s taciturn, ossified demeanor, Maggie is not biologically related to Eastwood’s Frankie; instead, she’s a fighter striving to prove her mettle in his gym. Frankie is initially recalcitrant and, even after accepting, reacts to her with a  choking resignation initially presumed to be lingering misogyny. That’s not untrue, but it’s contested by subcutaneous revelations – revelation even seems too obvious and predetermined a word for Eastwood’s uncompromisingly stern, subtle hand. A simmering, bitter sense of resignation looms over the film, the product of a tortured feud between Frankie and his biological-daughter, wisely left unliteralized, that recalls the shadow of Will Munny’s unrequited quest for redemption in Eastwood’s masterpiece Unforgiven.

The tempestuous, tentative relationship between the two characters is ultimately recalibrated as well by Maggie’s own dislocated soul (uncomfortably realized in a pandering, offensive pair of scenes with her mother and sister). But her humanizing effect on Frankie is palpably, vigorously enshrined in Eastwood’s tendentious but forthright filmmaking recalling the murderously tight caliber of Don Siegel or Anthony Mann, even accruing a sinuous menace late on. Scripted, the overly doleful final third of the film is a monotone drone, but Eastwood’s reticent, clipped style battens down the batty obviousness of the depression. Even Frankie’s only true friend Scrap (Morgan Freeman), an ex-boxer treading on his age and fighting the lonely doldrums of life with his austere and empathetic but uncloying narration, is saved from the usual mysticism Freeman is usually forced to swallow.

There’s blood to be drawn for criticism – although it’s something of a working class parable, the film qualifies this with a repressive treatment of Southern whites and a vague negligence to issues of race in boxing. But Million Dollar Baby’s drama still works because it is fraught with chaos and chance entombed in Eastwood’s astoundingly minimalist, ordered filmmaking, as though the director is himself trying to control that which cannot be tamed. The concise lines and shaken shadows of Tom Stern’s cinematography are girders upon which the film mounts a drama of quiet truth, but we’re always threatened by a fundamentally incurable world that no crystalline camera angle can protect us from.