Thirty years on, the misbegotten and wonderfully contorted post-Lynchian, pre-Burtonesque nightmare that is Walter Murch’s Return to Oz is on no surer, or saner footing, and thirty years on, this remains all the more reason to revel in the film’s dastardly, devilishly diabolical rereading of L. Frank Baum’s Oz fiction for its own purposes.

Murch, a sound designer and (crackerjack) editor by trade, never fully transitioned to the directorial realm, and it isn’t difficult to see why; in the abstract, Return to Oz is a nasty-minded anti-Wizard of Oz, a riposte to its progenitor more than a conventional sequel. As such, it couldn’t have but been primed to alienate and disarm the very audience, the one reared on the indomitable The Wizard of Oz, that might otherwise adopt it as their own.

For, despite everything working in the film’s favor, the lifeblood of The Wizard of Oz does course boldly through the veins of Return to Oz, albeit without an ounce of the whimsical sincerity that made the original film a much-loved holiday classic. A strand of thinking has it that Return to Oz is more a proper adaptation of 1907’s Ozma of Oz, with assorted characters borrowed piecemeal from other books in Baum’s series, but the electro-shocked pangs of anxiety in this film are nowhere to be found in the books just as they are absent from the original film. Truly, the tonally disturbed Return to Oz knows no home in the series proper; instead, its origins are more ghoulishly contrived from the dankest regions of the adolescent mind, making Return a spiritual rejoinder of sorts to the original film and a rejection of its nimble ways. Not an aside to the film rooted in the books, but a more perverted form of the original film altogether.

Certainly, Return to Oz, co-written with Gill Dennis, does share a generalizable connection to the 1939 classic in the sense that it resolutely accepts a similar, although diametrically opposite, sliver of collective unconscious dream logic. Almost literally so, at times, as we meet a frail Dorothy (Fairuz Balk) incontrovertibly scarred by her torrential return to the doldrums of Kansas – here a Western no man’s land devoid of sense, reason, or possibility – after a presumed dream visit to the wonderland of Oz. Her caregivers care not, but they do make the rounds torturing her with shock therapy primed to alter her mind into forgetting Oz altogether, or at least convincing her that it was all a dream fetched from deep within the bowels of her fractured childhood psyche wishing to escape from Kansas.

All of this, I hope, evokes the almost comical discrepancy between Return to Oz and its elder sibling, and anyone hoping that Oz, once returned to, will be a more forgiving, nurturing sort of locale is in for a surprise. For Oz itself has been decimated and twisted beyond all recognition, the remnants of good cheer and candy-coated glee confronting the rapture of past destruction. The hyperbolic adjectives should also clue you into to another fact, the most important marker of note when discussing Return: the film is worthy of discussion, and it earns a reviewer’s hyperbole. It may not be Oz as you know it, but from its death-marked first gasp into the world until its fatalistic denouement, the wicked world conjured by Murch, Dennis, and especially production designer Norman Reynolds is an undivine feat of pure cinematic conjuration.

With elaborate, hanging-on dread and fanciful architectural dejection as caked-on as in any Weimar era silent German horror film, Return is, if nothing else, a masterpiece of unfettered sideshow atmosphere perched like a demented carnival leaping out of the closet and sucking the energy from anything holy to be found. Replacing the now-marbled trio of scarecrow, tin man, and lion from the original film are a more left-of-center trio – a stumpy whirling dervish of a clap-trap contraption, a skeletal pumpkinheaded fellow, and an antique, cobwebed sofa with a taxidermied moose head attached – and they are all titanic feats of construction and performance. Even they, however, are no match for some of the outside figures offered up for cinematic sacrifice to the eyes and ears; the end boss of sorts, a fiendish stop-motion monstrosity Ray Harryhausen could only have imagined in his most restless sleep, is astounding, and his rock-faced underlings – similarly fashioned one frame at a time out of clay – couldn’t be creepier.

The film is, all told, mostly a cinematic excuse for its production design, but when a film is slathered and marinated in production design quite as delectably and thoroughly as this film is, it isn’t difficult to overlook the unfortunate baggage of the name tethered onto that design. As an adaptation of Oz in any form, book or film, Return to Oz is beguiling and probably in poor taste, and that is exactly what makes it such a wonderful curiosity all these years later. 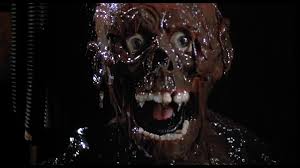 Return of the Living Dead

It is customary almost fifty years on to refer to George A. Romero’s Night of the Living Dead as, firstly, “George A. Romero’s”, and secondly, “a little slice of miracle”, both of which are primarily true statements. The shell-shocked outlaw ferocity and deeply traumatic guerrilla filmmaking of the piece were firmly entrenched in the burgeoning American New Wave spirit and yet they carried their own deathless nihilism and sense of hot-house entropy that literalized the state of America in 1968 in the pitiable sight of a slowly shrinking house filled with disagreeable anti-heroes surrounded by a great flesh-eating question mark outside, a question mark matched in its ferociousness only by its inexplicable existence. No one could understand the dead; they just were, much like the mayhem of a nation suddenly and sharply confronting the firing squad of its own centuries-long racist history suddenly pushed right up to the forefront of the national discussion.

It wasn’t exactly a replicable concoction, and if anyone could replicate it, Romero, the prime cinematic necromancer of the modern era, would be anyone’s first choice. Yet he was not, as is often misunderstood, the only architect of that seminal 1968 film; he was merely its primary voice. Romero’s one-time friend John Russo co-wrote the screenplay, and after the two split soon after the release of the original film, Russo had it in him to capitalize on his own involvement in the film (an especially appealing idea once Romero’s second film in the series, Dawn of the Dead, drew audiences to the theaters like zombies to a bleeding cranium).

Thus was born the more off-kilter Return of the Living Dead, a less literal follow-up to Night, although one that retains its small-town Americana origins and strips them for more overtly comic parts. The zanier nature of the piece actually reapplies Romero’s feverish, hyperventilating directorial style for a more comically manic tone here courtesy of Dan O’ Bannon, who ended up writing and directing in an attempt to differentiate Return from Romero’s more sobering, acid-drenched atmosphere. Thus, Return functions more as a variation on the zombie theme than a tried-and-true re-visitation of past glory.

Which is for the best; Romero perfected the serious zombie film with Dawn of the Dead anyway, tightening the screws of his claustrophobic locations and slow-boiling the dread until it achieved a level of satanic malaise. With Return, O’ Bannon would venture out into a different territory more closely reminiscent of The Evil Dead in both its viscous underbelly of silly-nasty humor and its commitment to locating that humor in an otherwise deathly stoic narrative devoid of arch-pandering or winking goofiness. It is, mind you, a comedy, but it never tips its hand. Take for example the slow, almost venomous build-up of events that leads to the eventual release of zombified gas into a nearby cemetery to wake the dead; the material is comical in its arbitrary qualities, building from mishap to mishap, but it is not treated as arbitrary by the script unless you are looking for it.

The same is true of leads Freddy (Thom Matthews), on his first night at a chemical plant in Louisville Kentucky, and his girlfriend Tina (Beverly Randolph), both of whom cavort with a broadly-artificial death-punk cadre of teens who fit not for one second together. Tina, draped in innocent pastels, is deliciously incongruous amidst the hyperbolically-garbed punk rockers – looking like a misguided sub-Orphans gang from the Warriors lost in the South – but the film never once addresses the central disarming qualities of this group of misfits assembled in front of us. This sense of unstated arch-silliness and even alienating irony suffuses the film but it never dips into easy post-modernism or dialogue that gives in to fits of hysteria. Rare is it that a comedy leaves the humor to the mise en scene and lets the dialogue off straight-faced, but then Return of the Living Dead isn’t a normal comedy.

Nor is it a normal horror film. It can’t hold a candle to, say, Dawn of the Dead, but by 1985 horror was well into the gutter, and Return is genuinely, even shockingly, cinematically literate when it comes to staging the meeting of terror and horror, the melding of the unstated, unknown apprehension behind the door and the abominable fact of death biting into your skull. There’s nothing stylistically audacious about it per-se, although the omnipresent slurry of the acid rain that turns the outside cemetery into a maelstrom of pandemonium and upheaval is a startling touch. Barring, say, Evil Dead II or anything by David Cronenberg, O’ Bannon’s film matches any outré American horror film of its decade for commitment to the terror of collective panic and the horror of perverting the human body beyond recognition, thus staying true to the spirit of most, if not all, horror: the dissassembly of the social and individual human form until we as a species can barely resemble ourselves amidst the fallout. In a decade that gnawed horror down to the bone, Return of the Living Dead is one of the few with any worthwhile flesh left to chew on.