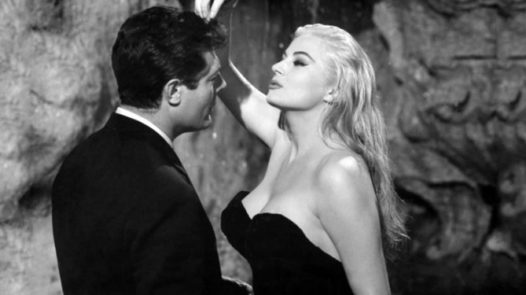 In my review of Nights of Cabiria, I noted that Federico Fellini grew more fantastical and whimsical with age, and he became forever less entombed in the limits of pure realism. True, and it might be assumed that with whimsy and fantasy come happiness and warmth. To some extent, they did; Nights of Cabiria ends on one of the most singularly uplifting notes in all of cinema. But whimsy does not automatically imply joy, nor a new leaf. Fellini was still an angry, tormented, complicated man; he had simply developed a new filmic vocabulary for exploring his emotions, whatever emotions they may be. New storytelling mechanisms dictated how he would explore emotions, and not what emotions he would explore. His application of Hollywood romance and Italian/ French romanticism was not always an uncomplicated acceptance, but more often a dare. Fellini would follow romanticism and melodrama to their limits and see if he could come out the other side a believer. With La Dolce Vita, melodrama is a slaughterhouse, and you unravel from the other side in shreds.

Beautiful shreds, mind you, but decomposed shreds nonetheless. La Dolce Vita is, in its own way, a counterpoint to Antonioni’s L’Avventura released in the same year, although the styles are not harmonious. Antonioni’s film was a sort of diabolical hyper-realism, or a realism stripped with rust and sand paper until it became difficult and grotesque. It moved past realism into a harsh, austere mechanical object entrapping its disinterested human characters until they could not even entertain the idea of a dream, a desire, or a fantasy that slipped beyond realism. They couldn’t even entertain the idea of searching for purpose within realism because the reality of their daily lives was so divested and purposeless and anemic in the first place.

Fellini’s film arrives at a similar endpoint, but it does not take the same journey. La Dolce Vita is a magnetically luxurious exercise in free-floating romance, a study in Hollywood film stylings that drives Hollywood cinema to the cliff of its imagination and forces it to go over the rim. It is so lustrous and luminous that the majesty becomes an ungainly malformation, less an escape from reality than a newly minted, more gilded prison that disables one from addressing reality at all. It is a beautiful, golden film where all that is beautiful and golden become nasty and unavoidably garish, and the fact that we are subjected to it for three languorous hours becomes part of the necessary cruelty. If Antonioni’s film was an exercise in the harshness of minimalism, Fellini’s is an implosion of the maximum.

The self-reflexive director follows journalist Marcello Rubini (Marcello Mastroianni), although follows is probably not the most applicable word. Fellini lurks behind Marcello, maybe, for a cycle of days that do not necessarily represent linear, teleological time, and this disconnect too becomes a capsule of the film’s disjointed, melancholy mystery. Specifically, he lurks behind Marcello as the journalist plays with just about every woman he can find. The film’s sardonic, scabrous title (“the sweet life”, in English) could imply the media frenzy around Sylvia (Anita Ekberg), a famous movie actress, and the lust Marcello develops for her that cuts between personal and professional interest. Or it could explore the intoxication Marcello feels for the wealthy heiress Maddalena (Anouk Aimée), or the cushion of living with his fiance Emma (Yvonne Furneaux), whom he increasingly seems disinterested in.

Fellini was always a director of women, ever fascinated with gender and unnaturally sympathetic toward women (compared to the men, and in particular the often tyrannical, empowered directors, of his age, or today). Marcello has a number of potentially sweet lives waiting for him if he would just settle down and value any one of these women as a person, rather than simply questing for them as objects. But he is never content with any of them. For him, the glory of chasing women is his sweet life, and it becomes so sweet that the cavities might be fatal.

In this film, the director doesn’t necessarily feel “sympathy” for any of the characters, but he certainly finds himself drawn to the corrupted eye of men who use and are drawn to women for transitory purposes,  fleeing between females viewed as objects more than people. La Dolce Vita isn’t so much about masculine privilege (compared to Nights of Cabiria) as it is more holistically about the festering rot of a modern world pining for the flavor of the moment so quickly that people never take time to rejoice in what they have, so much so that the completion of a quest becomes meaningless and a simple stepping stone toward searching for a new fixation. But, if La Dolce Vita isn’t exclusively about male privilege, Fellini still divines his film in the empty heart of Marcello and his habit of jumping between women to suit his fancy.

La Dolce Vita is, as many Fellini films were, a husky tale of noirish chiaroscuro and impenetrable cityscapes where humans wallow and engage in the seductive side of perverse life not to escape wallowing, but simply to wallow with a little more zest than otherwise. Fellini’s film tempts his characters, beckoning them with the fantasy of youth and the glorious, beguiling bewitchment of Rome as a portal into the netherworld of decadence and otherworldly pleasures (soon enough, the Italian giallo movement would explore a similar theme, with the dreams replaced by nightmares). Nothing about Fellini’s style here is small; if his characters wish to revel, he will have them revel from moment to moment, from scene to scene, and from stop to stop, until they just about drown in it, or until their bodies give out in fits and spurts after colliding with one another for one too many nights. Marcello is never not moving somewhere, and the film will do all it can to catch up with him, rushing to an object or a desire and imbibing as fully as it can. It rushes and rushes until it starts to whip Marcello forward and the act of always chasing for a new woman becomes his prison.

Thus, Fellini’s film is a grand test for his characters and for the audience: how much can the characters handle, and what are the limits of us, the audience? Do we enjoy the guilty pleasures of an endless Hollywood nighttime romance, luscious and replete with endless twilights and dawns that seem not to exist in day or night but in the interstitial mystique between them? How grand would we want a movie to be before it becomes gluttonous and corpulent with gilded energy that overexcites into mania? How superficial a beast do we want to confront before endless superficiality becomes a violent assault on the audience? How transitory do we want a film to be, how much can we stand an endless stream of self-consciously operatic moments before we just want to go home and, I don’t know, take a nap?

Even more than Nights of Cabiria, La Dolce Vita is a study in Hollywood excess and the romance of the mythic delicacies of European identity. It occupies a state of Hollywood allure as quickly and as opulently as it can. It dances up to the edge of too much Hollywood; it is an anarchic high of a film that forces us to understand the strain of keeping up the high. Short of, say, Sunset Blvd, you could not find a film with a more unstable cognitive dissonance about itself as a film in the first place. It is a film that exists, as Roger Ebert wonderfully put it, “not as a crossword-puzzle” but as a direct sensory experience. The characters’ feelings approach us experientially; we feel the characters’ desire for glamour in the film’s ostentatious production design, and we feel their emptiness when that mise en scene takes over the screen and engulfs the characters. The look of the film seduces us, like it seduces the characters. The emotional journey of the film surpasses the feelings of the characters and becomes our feeling experientially.

La Dolce Vita is an exercise in the idea of the “moment”; even seemingly lithe, imperceptible ones resonate. There is, for instance, a shot of Ekberg bending over a rail that diffuses into the image of a sultry saxophone bent over in the same position. The saxophone is being played in a nightclub, being blown into with its headpiece around where Ekberg’s mouth would have been. It is as visually provocative and sexually suggestive as any shot in all of cinema, even as it does more to reinforce and imply the film’s theme of the seductive woman as “inhuman object” to be played by Marcello, thus fascinatingly and I suspect intentionally implicating the film in Marcello’s actions.

It is a film of many such bewitching moments, all played as big and loud and alive as those moments could be, until the film realizes that the moments are temporary refuges from life that slowly become tired and tiring as time goes on. We are wowed by the phenomenal excess of the production, the desperately wide shots, the astounding chiaroscuro, the comic momentum, the screwball-styled newspaperman-punchy dialogue, the rampaging comedy, the pageantry and celebrity of it all. We are wowed so much that it hurts, and the endless strain of being wowed becomes a trap we can’t escape from. The film doesn’t confront cinema by talking to it or about it, but by becoming cinema, feeling the tactility of cinema and the glory of cinema and bigness of cinema. It is an immanent critique of film, a film that strives to understand Hollywood glamour by becoming Hollywood glamour and inviting us to see the seams of its quest, showing how undone and tired and callous and brutishly craven it becomes when all it does is search to inhabit the spirit of glamorous Hollywood. Indeed, the film becomes cinema, aspires to cinema so much, and searches so much for cinema that it nearly kills itself in the process.

The most famous search the film undertakes, and the most famous example of Fellini’s rushing camera searching for something it can not truly find, occurs in the film’s final moments. Near the end, we welcome the characters to a forest of memory, with the tall, tall trees and the oppressive lateral framing serving as an escape that turns into another prison. The place is metaphysical, surely, with the characters beckoned forward by some unsavory, unknown entity that exists in the air. They pass through the almost carved, hashed-out limbo of the forest, with the trees longitudinally cutting through and contrasting violently with the expansive latitudinal frame. It could be a whimsical sight of spiritual meaning, the abstract conclusion and destination to a week-long quest for meaning and identity.

But Fellini’s definition of whimsy is a ruse, and the characters find that the only destination is continuing to wait, relying on emptiness, and reclining into the comfortable positions as disinterested enigmas barely tethered to a mundane world that doesn’t care about them, and that they don’t really care about. Like Antonioni’s puppets, they were searching for purpose not because they wanted to, but simply because it was chic to attempt to “find oneself”. It was the thing, for them, to do, and they were sleepwalking through it just like the rest of their lives. Cruel, husky, hurting, noirish Hollywood indeed, and a study in cinema as palpable and head-shaking as any film ever made.